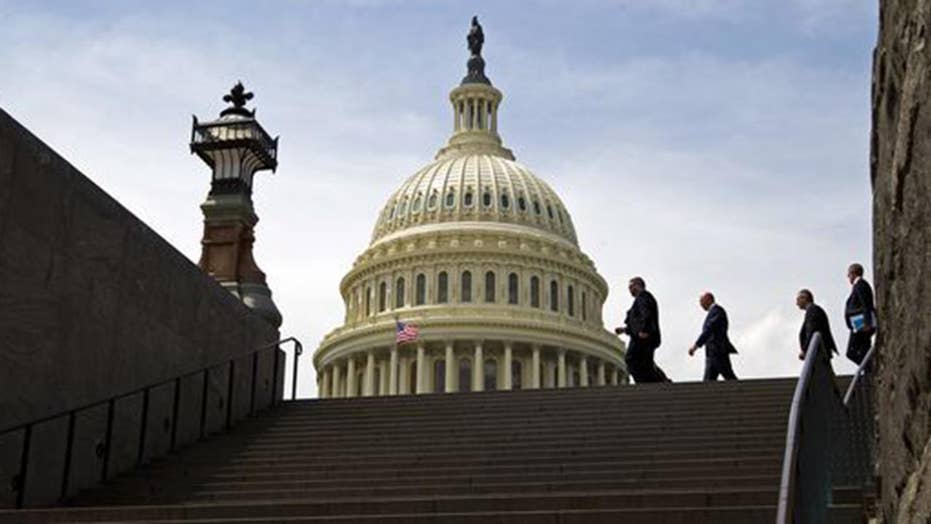 Congressional leaders were putting the finishing touches on an approximately $1.3 trillion spending bill Wednesday as they looked to avoid a looming government shutdown -- with a number of controversial measures being taken off the table.

Leaders were set to announce the enormous spending bill later Wednesday ahead of a Friday midnight deadline to avoid the shutdown.

Both sides of the aisle have been keen to avoid a repeat of the shutdown in January, which came after lawmakers clashed over the state of the Obama-era Deferred Action for Childhood Arrivals program, which gave protection to illegal immigrants brought to the country as children. DACA was set to expire this month, but that expiration has been delayed by court orders.

Sources outlined the spending deal to Fox News, which appeared to include no DACA provision and also gave limited funding to border security measures that President Trump had pushed for.

The proposed deal would deliver $10 billion in new infrastructure funding and reverse cuts to programs proposed by Trump. It would also make funding available to begin construction on the Gateway project, a plan that includes a New York-New Jersey tunnel, but would do so via increases to Amtrak and other accounts. Trump has threatened to veto any funding for Gateway projects.

The proposed deal also bumps up funding in the fight against opioid abuse, to the tune of $2.8 billion for treatment, prevention and research. There is also an additional $2 billion to address Veterans Affairs facilities.

Democrats also picked up a win in securing a $2.37 billion increase for Child Care Development Block Grants -- making it the largest single-year increase in its history.

The deal also does not include any provisions to defund so-called “sanctuary cities,” nor does it cut funding to Planned Parenthood. The deal also ignores the Trump administration’s plan to cut the Environmental Protection Agency by 30 percent, instead continuing last year’s funding. It includes almost $700 million to secure America's elections and push back against Russian cyber warfare. Sources told Fox News Wednesday afternoon that a measure to shore up background checks for gun purchases was also in the bill.

The Associated Press reports that the deal also includes an $80 billion bump for the Pentagon, giving Trump and GOP hawks a major victory as it brings the military budget to over $700 billion.

“Well, we do have a few language points that need to clear up but we have made good progress,” she told reporters. “ I want to commend our staff, the staff of both House, Senate, and the Republicans as well for dealing expeditiously with some of the differences, resolving some, putting some aside for another day.  I think we are going to present to our Members something they can comfortably support.”

The House wants to consider the bill Thursday, sending it to the Senate Friday.