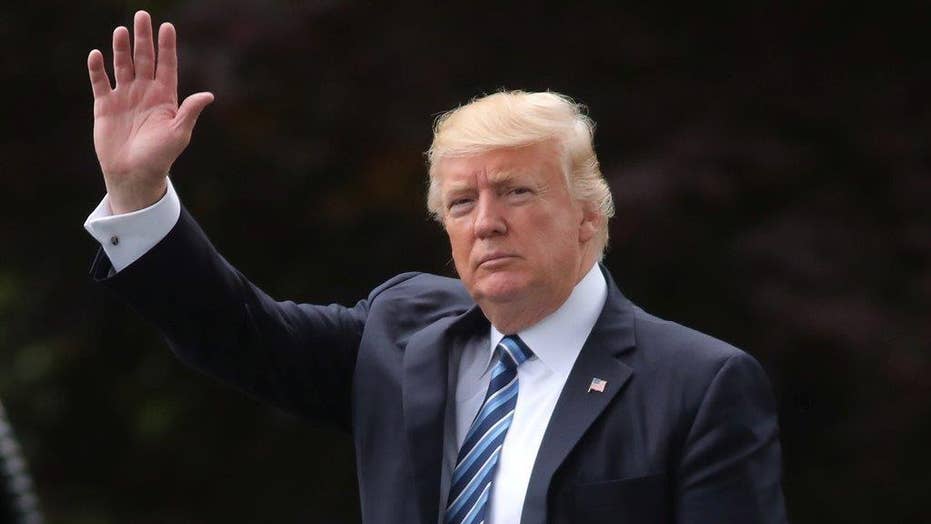 On 'Special Report,' James Rosen takes a closer look at the what the president's itinerary means

President Trump just announced that Saudi Arabia will be the first foreign country he visits as president, underscoring both the success of Saudi outreach to the new administration, and the determination of this President to recommit to the strategic alliance providing stability in an unstable region. The symbolism of this is exceptionally important, illustrating that the Trump administration understands the fundamental issues at play in the Middle East today.

Make no mistake: The Middle East today faces a determined effort to bring down the Saudi led Gulf Monarchies that constitute the front line in the battle against terrorism. And while it is not popular to praise monarchies, particularly when the crown sits atop an Arab head, Saudi Arabia and other countries governed by ruling families have emerged as the last line of defense in a dangerous “great game” for the heart of the Middle East, and with it, global stability.

Iran, ISIS, and al-Qaeda all want to replace the Gulf monarchies, with rulers under the sway of Iran’s Shia theocracy or, in the case of ISIS and al-Qaeda, with a radical Sunni caliphate. Both Iran and the Sunni jihadis dream of controlling Islam’s holy cities of Mecca and Medina, as well as the oil fields of Arabia, prizes that would endow them with tremendous influence over the Islamic world and beyond. Just this week, Saudi Deputy Crown Prince Mohammed bin Salman warned that his country is “the primary target for the Iranian regime.”

Blocking their path is the Saudi-led traditional Gulf ruling order, the GCC. These six monarchies—Saudi Arabia, the United Arab Emirates, Bahrain, Kuwait, Oman and Qatar—are the last foundational pillars directly and indirectly upholding the nation-state structure in the region. They not only constitute a bulwark against the spread of Iran and ISIS but also help maintain the nation state order beyond their borders by supporting Jordan, Egypt, Pakistan and other regional states that would likely fall without their active support. Without the big checks of the wealthy Arab monarchies, not to mention American aid, Egypt would likely have crumbled by now. The same goes for Jordan. In Yemen, where the Iranian backed Houthis are fighting a brutal civil war against the legitimate government, what looks now to be an emerging disaster zone would have gone that way long ago without massive Gulf support, including hosting millions of Yemeni workers and refugees in the GCC.

A problem for many Western intellectuals, though, is that they don’t like the existing Gulf monarchical order and hence, discount the value of those monarchies to America as allies. Those crowned heads represent many things that offend them: autocracy, inherited power, “unearned” wealth and privilege, and the suppression of women’s rights. All this is exacerbated by a growing aversion to an Islam that is increasingly defined in public narratives by terrorist and jihadi atrocities.

This attitude is dangerously flawed. While there is still so much social progress to be made, the Gulf monarchies have provided their people, and the world order, with decades of stability and far better governance than their peers, namely, the post-colonial regimes that emerged in the last 70 years, whether socialist, Arab nationalist, communist, Islamist, or even “democratic” like Lebanon.

Yes, monarchies have certainly curtailed freedoms. But their efforts in light of any suppression of freedoms of their people have paled in comparison to those of their republican or Islamist peers. Count the number of Iranians killed by the Islamic Republic since the revolution of 1979 and note that it is exponentially more than the number of people executed by all the Arab monarchies put together. The Iranian regime’s brutality compares in its use of violence only to the Ba’ath republics of Syria and Iraq.

Despite any corruption and elite self-indulgence in the monarchies, their subjects have still benefited from a substantial share of the economic pie—far more than citizens in the aforementioned states have received since their independence. With a stronger social compact with their people, it’s not surprising that the monarchies were better able to withstand the chaos and bloodshed that came to define the Arab Spring.

The Gulf monarchies, faults and all, are now the primary glue left holding the dangerously stressed Middle Eastern region together. Were they to weaken or even collapse, it is not inconceivable that they could bring the international order down with them. Imagine revolution and chaos in the center of the global map with the region’s sea and air lanes imperiled, oil infrastructure compromised or crippled, and a Muslim community spread across the world becoming more consumed by bitterness and anger. The idea that this could lead to global conflict is not hyperbole; previous world wars were ignited by much less.

The West must look at the Gulf monarchical order as its strategic partner and fully support it as it stands up to these dangerous revolutionary forces, not only ISIS and al-Qaeda but also, and with equal urgency, Iran, which is a much more formidable and institutionalized revolutionary actor than either ISIS or al-Qaeda. Iran’s revolutionary capacity is more powerful because it enjoys the resources of a modern state. It is also more dangerous, since it insidiously pretends to be a responsible member of the international order, feigning to strive for peace and playing the diplomatic game while actively working to bring down the Arab order through its Revolutionary Guard Corps and its non-state actor/terrorist proxies across the region.

The relative success of the Arab monarchies needs to be understood and recognized if the dangerous downward trajectory of the Middle Eastern region is to be halted and reversed. President Trump, in announcing that his first foreign trip will be to Saudi Arabia, shows that his administration clearly understands this, and understands too what’s at stake for the world.