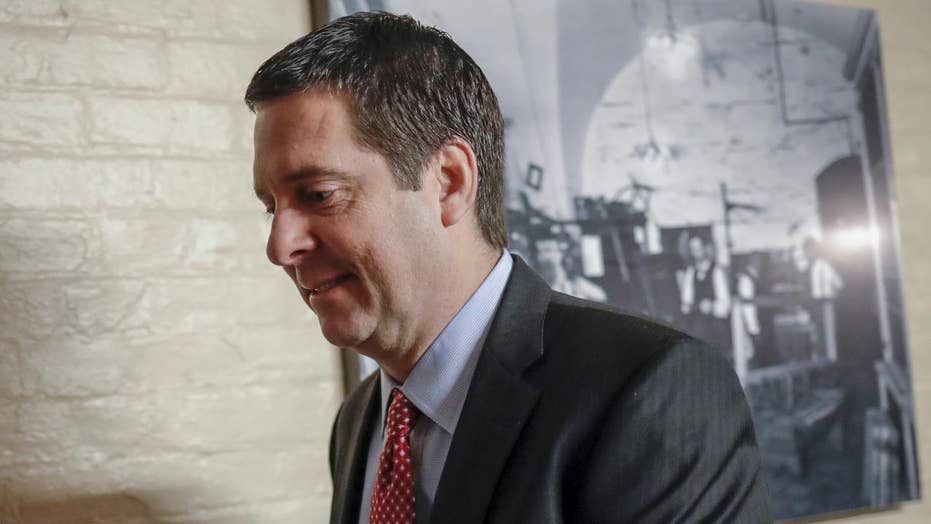 Why the surveillance memo matters

What exactly is in the FISA memo alleging government surveillance abuses? Is it a scandal really worse than Watergate? Why are Dems so against its release and why are Republicans in favor of it going public? #Tucker

Democrats have mounted a full-scale partisan attack against the release of a congressional memo that reportedly accuses the FBI of surveillance abuses and political bias in actions that led to the investigation of Russian interference in the 2016 presidential election.

According to the Washington Post, the memo “suggests that the origins of special counsel Robert Mueller III’s probe into Russian interference in the 2016 election were tainted by political bias. It alleges that the FBI, when obtaining a surveillance warrant, relied in some part on a dossier of allegations against then-candidate Donald Trump that was underwritten by the Hillary Clinton campaign and the Democratic National Committee.”

President Trump is expected to approve public release of the memo Friday, according to multiple media reports. In a Friday morning tweet he wrote: “The top Leadership and Investigators of the FBI and the Justice Department have politicized the sacred investigative process in favor of Democrats and against Republicans – something which would have been unthinkable just a short time ago.”

The memo comes from Republicans on the House Intelligence Committee, headed by Rep. Devin Nunes, R-Calif., and has been dubbed the Nunes memo.

The FBI has joined Democrats in attempting to proactively undermine the Nunes memo and urged President Trump not to release it on national security grounds.

So at what point did we decide that the bureaucracy was divorced from congressional oversight and accountability?

All the ins and outs of this issue are hard for the average American who doesn’t spend all day keeping up with this very complicated story to follow. So now maybe it’s time for the American people to step back and consider some fundamental questions about what is taking place in this entire situation.

There are many in the left and the media decrying Republicans for attacking the institution of the FBI. To which I ask: at what point did institutions, full of imperfect human beings, become infallible?

At what point did we somehow decide that protecting institutions is better than protecting the Constitution and the civil liberties of the American people? We should be asking ourselves very basic, fundamental questions, such as who rules who?

The very foundations of our institutions are the constitutional ideals of rule of law and the belief that the law is king, in addition to all the rights given to Americans by our Constitution and Declaration of Independence.

In a republic, there is no one, no institution, above “We, the People.” The Founders believed that power flows from the people. We elect our representatives, who then in turn represent us and then, with the power given by the people, fund and manage the various governmental agencies.

So at what point did we decide that the bureaucracy was divorced from congressional oversight and accountability?

It was not so long ago that many civil libertarians were screaming from the ramparts about National Security Agency abuses of almost limitless FISA (Foreign Intelligence Surveillance Act) warrants to collect anonymous data from U.S. citizens' landline communications. They warned us about the abuses such data collection might engender with federal intelligence and law enforcement agencies.

The current questions – about the quality and accuracy of the information used to gain a sweeping FISA warrant against the Trump presidential campaign, and how that warrant was used – should be of great import to any and all who claim to support our nation's fundamental rights.

Because that is what this entire issue of the Nunes memo is about: demanding accountability and transparency from our Justice Department and FBI as to their actions over the last several years.

Did the FBI and Justice Department in fact use a piece of partisan propaganda, infused with information from Russian intelligence operatives, to secure a FISA warrant to spy on U.S. citizens?

Did they in fact turn the awesome power of the surveillance state against U.S. citizens, not necessarily for national security reasons, but for political ones?

In the tradition of every banana republic around the globe, did the U.S. government become weaponized against an opposing political party?

I believe all of these things, and likely more, took place. Add to it that the mainstream media, wittingly or unwittingly, helped inject Russian misinformation into the American bloodstream.

So there should absolutely be a crisis of faith and trust in our institutions.

Perhaps we are coming to the ultimate realization of what the end result of a massive Administrative State looks like. Over the last 100 years there has been a dramatic shift away from our Founders’ form of government.

Progressives envisioned the Administrative State as a massive bureaucracy of the educated elite that would accelerate “progress.” This today is comprised of millions of federal employees and over 430 departments, agencies and sub-agencies.

While some are under the illusion that we are experiencing the ideals of the Founders, we are in fact living the Administrative State dreams of the progressives.

So what if some in the Administrative State, resistant to oversight, shirking off the idea that they somehow work for the people and their representatives, actually became heavily politicized and struck back? What if they decided that Donald Trump – who potentially is an existential threat to everything progressives, bureaucrats and the mainstream media hold dear – should be destroyed?

These are fair questions that need answers. They address who we are as a country, what we actually believe, the roles of power in this country and what our future looks like.

We must understand that the Founders were optimistic realists about what they could accomplish. They believed that human beings were endowed with rights by their creator, yet they were fully aware of the imperfections of human nature. They knew we are capable of great good but incapable of sustained good.

Confronted with this conundrum, the Founders knew they must create a government that protected God-given rights. But this is also why a separation of powers within the federal government exists because of a deep-rooted mistrust of human nature.

The Founding Fathers never wanted a consolidation of power that might endanger our rights. The progressives, in their utopian statist views, naively believed that human nature was essentially good. They believed that a utopian society could in fact be created in this world by endowing a state with massive power to encourage accelerated progress.

The problem with a massive state run by bureaucrats is that it eventually becomes the enemy of life and freedom, of privacy and civil liberties.

So while many on the left will continue with their irrational drivel on why the Nunes memo is so detrimental to our institutions, I would argue that it is in fact the behavior of those within those institutions that has been so devastating.

The only way that we will ever get the facts on what has taken place is for transparency and declassification, for accountability and oversight to take place. And that is precisely what is happening at this moment.