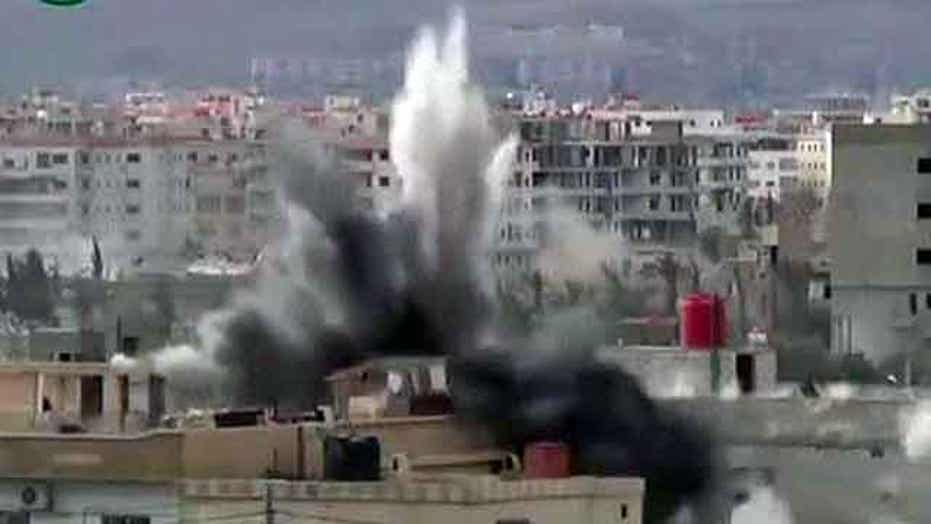 Secretary of Defense Chuck Hagel begrudgingly acknowledged Thursday that the Assad regime did use sarin gas in the civil war gripping Syria. Hagel made his declaration after Britain, France and Israel had already concluded that a chemical weapon had been unleashed.

The U.S. has long tiptoed around the Syria conflict. President Obama declared back in August 2011 that President Assad must go, but, with Iranian and Russian backing, he is still in power.

Obama has also declared that any use of chemical weapons would be “a game-changer,” but Assad has now deployed them seemingly without consequence. When will the U.S. assert leadership and take action?

Even humanitarian aid has been slow in coming. Though Secretary of State Kerry announced that the U.S. will soon deliver additional “non-lethal” assistance, food and medical supplies pledged in February have yet to arrive. And importantly, the U.S. still refuses to forcibly ground Assad’s air force by imposing a no-fly zone, a move that would greatly assist Syrian civilians who are daily targeted by the regime as well as help those rebel groups that are aligned with U.S. interests.

Until there is a coordinated international response, Syrians are left to the mercy of a regime that does not view its opponents as innocents. Both Assad and SANA, Syria’s state news agency, constantly refer to “terrorists,” a term bandied about freely to justify the refusal to end the brutality.

UN Security Council impotence has been the standard for the Syria crisis. Appeals from the UN’s own humanitarian agencies have been ignored, as China and Russia have blocked any meaningful action to protect Syrians and end the carnage.

Yet, the long-term ramifications of inaction are clear. More than 1.3 million Syrian refugees are already living in neighboring countries. Another 4.25 million are displaced in Syria. By the end of the year, UN officials say, half of the country’s population will be in dire need of assistance.

As Assad’s forces continue to destroy their own country, the swelling ranks of refugees strain the resources of Lebanon and Jordan, the latter a key U.S. ally that, over the years, has accommodated other Arab refugees, including Palestinians and Iraqis.

Israel, of course, is watching with justified concern what for nearly 40 years has been, despite the absence of a peace treaty, its quietest border. To preserve the status quo, the UN will need to renew, in June, its peacekeeping mission along the Israeli-Syrian border.

Under normal circumstances, children are symbols of hope for the future. But in Syria they became the first victims when security forces detained and tortured a group of youngsters in March 2011.

That incident set off the popular uprising and Assad’s fiercely unforgivable crackdown that has already left more than 70,000 dead and major cities in ruin.

Today, Assad heads a severely fractured country that will be difficult to rebuild and sustain if and when the conflict ends. His downfall, despite American and European predictions, is hardly inevitable.

Assad, in his TV interview on April 17, Syria’s independence day, ironically known as “Evacuation Day” in recognition of the date French forces left in 1946, charged Western countries with seeking his overthrow in order to reassert control over Syria.

Does Assad, cloistered in Damascus, really believe that this war is retribution for events 67 years ago?