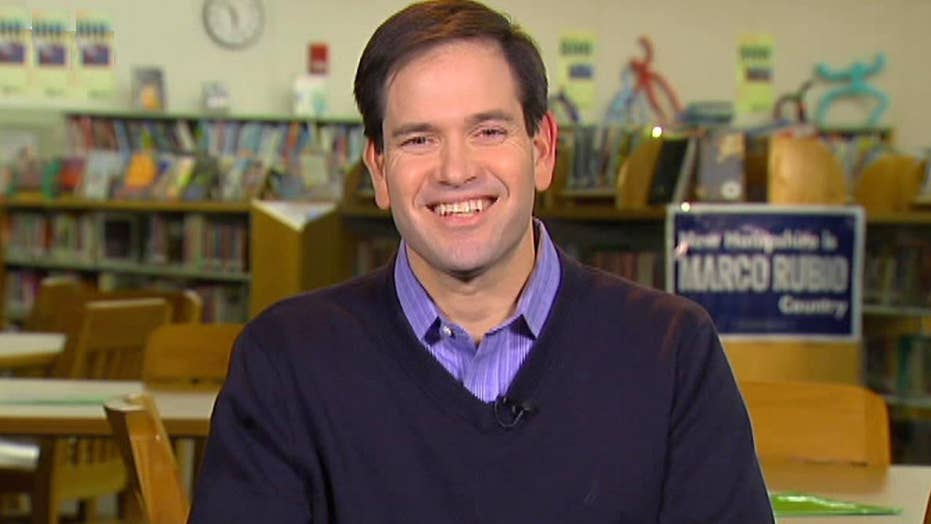 GOP presidential candidate Marco Rubio goes 'On the Record' on the latest polls showing him making gains in New Hampshire primary race, being a target among rivals before the next debate and more

A few days before the Iowa caucuses, Ted Cruz called Marco Rubio a “Republican Obama.” It was intended to be an insult. Rubio should take it as a compliment.

Like Barack Obama eight years ago, Rubio is a young and handsome first-term U.S. senator, an eloquent speaker with a compelling personal story who is a candidate for the presidency of the United States.

And like Obama eight years ago, Rubio is in a horse race. And despite his stumble in Saturday night’s debate in New Hampshire, he nonetheless is sitting comfortably behind the leaders and ready to make his move. Once he sees his opening, he could sprint all the way to the White House.

In many ways, America is back where it was eight years ago. Voters are looking for renewed hope and a sense of identity, and they want their country to regain its pride and stature in the world. There is a current of anger in the campaigns of Cruz, Donald Trump and Bernie Sanders, but strip away the veneer and you find an undercurrent that has always driven America: optimism for a better future and for a leader who will represent the dignity, the decorum and the exceptional qualities of the greatest nation in the world.

I’ve had the opportunity to get to know Marco Rubio. I’ve lived in Miami, so I understand his roots and the people he represents. I have no doubt that he can be a great president – but first he has to win the race.

I’m a big fan of thoroughbred racing, and I’ve always been fascinated by the sport’s great champions. There have been horses like Secretariat and Ruffian who charged out of the gate, took the lead and never looked back. And there have been others like Seabiscuit, who stuck comfortably to his pace a few lengths back and then charged out of the pack to win.

In this horse race, Rubio is like Seabiscuit. He’s in third place right now, but the leaders – Cruz and Trump – are well within his sights. And he knows that the winner isn’t the candidate who jumps into the lead. It’s the one who finishes first at the national convention.

For Rubio, winning the Republican nomination could be as easy as 3-2-1: Finish third in Iowa, second in New Hampshire and first in South Carolina, then keep the pedal to the metal all the way to Cleveland. And if his performance in Saturday’s debate lands him lower than second in New Hampshire, he has more than enough time to get back his stride and overtake the leaders.

With that in mind, there are a number of things that Rubio and his team need to emphasize as the race kicks into high gear:

This is not the America of 200 years ago. We are the sons and daughters of immigrants from everywhere in the world, and as the son of Cuban-Americans, Rubio knows this as well as anyone. His parents’ struggle and his rags-to-riches story should be an inspiration to all ethnic groups, not just Latinos, much as President Obama’s was eight years ago. Rubio is smart to appeal to the religious Right, and reaffirming his faiths and beliefs is commendable. But going forward, he’d be wise to address the equality of all ethnic groups and religions in our country.

One of the things Cruz did well in Iowa was to invest in the infrastructure and resources needed to compile big data that could be analyzed to give his campaign direction. It mirrored a tactic that Obama mastered in 2008, and nobody has ever done it better. Super PACs are great at buying advertising time, but they should play an equally important role in making sure Rubio has the best data-crunching capabilities available.

Rubio finished third in Iowa, behind Cruz and Trump, but closer to Trump than anyone expected. Now he hopes to finish second in New Hampshire Tuesday, behind Trump, who is the heavy favorite, and ahead of Cruz. That could give him the momentum to come in first on Feb. 23 in Nevada, where he’s been endorsed by Sheldon Adelson’s powerful Las Vegas-Review, and then on Feb. 27 in South Carolina, where several key members of his team – including Terry Sullivan, the director of his PAC, Reclaim America – have powerful roots. Just three days later, on March 1 – Super Tuesday – when voters in 14 states go to the polls, he could already be in the lead.

Rubio has been articulate in laying out how he would deal with issues like immigration, health care and national security, and he’s provided more substantive details on his website than any of his opponents. Cruz has given him a lot of flak for his involvement with the “Gang of Eight,” but when did seeking bipartisan support to solve a problem become a bad thing? Rubio should use that to his advantage, because working with both parties to find solutions is the mark of a great president. Rubio is one of the best communicators in politics today, and he has the ability to explain his positions clearly, providing details on how to improve our health care system, protect our country, defeat ISIS and stop illegal immigration without alienating legal immigrants.

Marco Rubio is a compassionate, brilliant, articulate, focused leader who can rally America to a new era. Now is his time to sharpen his focus, take the lead at the end of the first turn, pace himself in the backstretch and leave the others in his dust as he sprints to the finish line.