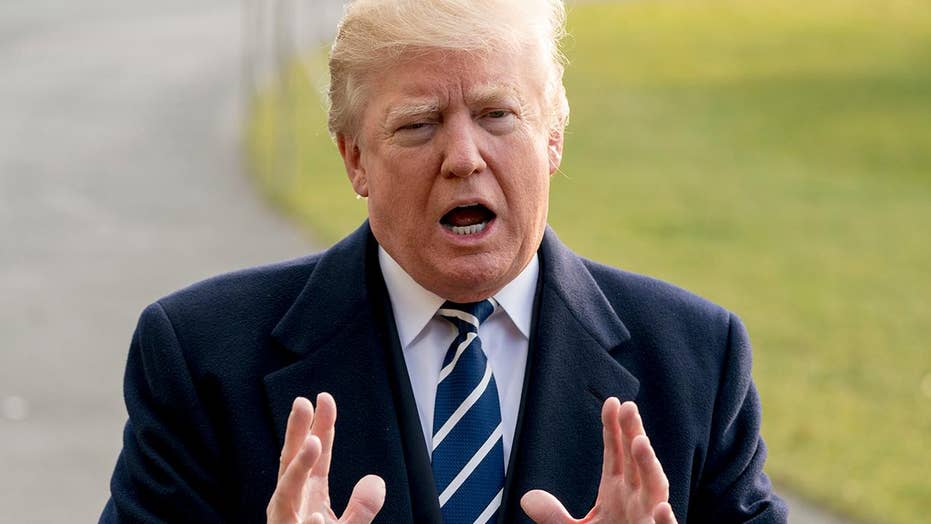 Trump: There's been absolutely no collusion with Russia

A long front-page story in the Washington Post Friday that claims America’s security is at risk because President Trump refuses to accept findings of U.S. intelligence agencies that Russia interfered in our 2016 presidential election is deeply flawed and amounts to fake news.

I reach this conclusion based on my 25 years working in and with the U.S. intelligence community. It is clear to me that the Post story is designed to advance the left’s teetering Trump-Russia collusion narrative.

And I reach the same conclusion on a related allegation by the Washington Post in the same story that President Trump’s intelligence briefings are playing down or omitting intelligence on Russia’s role in the presidential election. This issue has liberal journalists and former intelligence officials claiming that intelligence is being politicized to avoid offending the president.

The Post article’s authors – Greg Miller, Greg Jaffe and Philip Rucker – say that a Jan. 6 Intelligence Community Assessment (ICA) said it was an “objective reality” that Russia meddled our election to help Donald Trump win. The Post article  repeatedly asserts that President Trump’s refusal to accept this assessment means he is refusing to recognize the threat to U.S. national security posed by Russia.

The truth is that the January ICA is far from objective truth and had serious problems. I broke the story on Fox News.com last January that this assessment appeared to be rigged to produce a conclusion to hurt President Trump politically.

Because intelligence community procedures on drafting this type of analysis were not followed and it reflected the views of only three intelligence agencies – not all 17 as the mainstream media claimed. The New York Times was forced to publish a correction on this point last June.

Even worse, as I explained in a May 12 Fox News op-ed, the January ICA on Russian interference in the 2016 election was drafted by a group of about two dozen  hand-picked analysts, a major violation of intelligence community procedures.

So what did the Washington Post article say about the huge problems with the January ICA?  Absolutely nothing.

In addition, the Post article’s allegations of politicization of President Trump’s Presidential Daily Briefings are extremely misleading. According to the article, the briefer who sees the president every morning often structures his presentations to avoid upsetting the president. The article also claims that analysis about Russia “that may draw Trump’s ire is in some cases included only in the written assessment and not raised orally.”

There is no scandal here. President Trump’s Presidential Daily Briefing, a highly classified document about 10 pages long, is not excluding any intelligence on Russia. The Post article omits that by tradition, the oral briefing is as short or long as the president wants. The article also doesn’t mention that CIA Director Mike Pompeo briefs the president every morning.

A more important omission: the article fails to mention that Presidents Clinton and Obama often would not meet with their briefers on the Presidential Daily Briefing at all because the presidents did not like what the briefers had to say. I wrote about this in 2014. Marc Thiessen wrote a similar column in 2012 published in The Washington Post – a publication that Washington Post reporters presumably should be aware of.

So in fairness, shouldn’t President Trump be credited for meeting with his Presidential Daily Briefing briefer every day, after President Obama refused to do so?

Miller, Jaffe and Rucker also try to shore up the deteriorating narrative of collusion between President Trump and his advisers with the Russians. The reporters claim that the president’s skepticism about intelligence assessments of Russian meddling in the election and his interest in establishing a working relationship with Russia represents something nefarious.

Never mind that no evidence whatsoever of such collusion between Trump or his campaign and Russia to influence the presidential election has surfaced, despite multiple investigations since mid-2016. The reporters also ignored that the Obama administration sought to establish a working relationship with Russia. Remember Hillary Clinton’s “Russia Reset?”

I believe President Trump’s reluctance to accept the findings of U.S. intelligence agencies on Russian election meddling is understandable, given the major flaws in the January 2017 ICA as well as the incredible hostility that intelligence officers expressed against him before and after the election.

Current and former intelligence officers have been trying to undermine Donald Trump since the summer of 2016 by calling him “a traitor,” stating they would refuse to brief him when he was a presidential candidate and leaking details of his intelligence briefings to the media.

I have long believed that this disrespectful and irresponsible behavior severely damaged the relationship between U.S. intelligence agencies and President Trump. I was stunned when former Deputy CIA Director Michael Morell recently appeared to concede this point.

Morell, who  wrote an August 2016 New York Times op-ed calling candidate Trump a “threat to our national security,” told Politico’s Susan Glasser earlier this month that he and other intelligence officers failed to think through the consequences of their partisan attacks on the man who would go on to become our president.

While partisan efforts by intelligence officers to undermine President Trump hurt the intelligence community’s relationship with him, CIA Director Pompeo fortunately seems to have used his close relationship with the president to reverse this damage. Not surprisingly, the Washington Post story makes no mention of this.

Finally, the Post story misses the boat on President Obama’s decision in late December 2016 to expel Russian diplomats and close two Russian diplomatic compounds to punish Moscow for interfering in the 2016 election.

The article discusses at length how the Trump administration considered lifting these sanctions. However, it fails to discuss how the sanctions likely were imposed by the Obama administration to sabotage President Trump’s Russia policy.

President Obama imposed these sanctions on December 29, 2016. It was extraordinary for an outgoing president with only 22 days in office to take such dramatic action without the consent of the president-elect, even though the sanctions were certain to result in retaliation by Russia during the next president’s term.

One has to ask why President Obama chose December 29, 2016 to sanction Russia when Russia had committed many other heinous acts during his presidency, such as invading and seizing Crimea and supporting rebels in Ukraine who shot down a Malaysian Air flight in 2014.

President Obama’s 11th hour Russia sanctions were not just an attempt to sabotage the Trump administration’s Russia policy. They also were a trap to catch Trump officials in a supposed Logan Act violation by discussing these sanctions with Russian officials before Trump was sworn in.

The Logan Act is a law enacted in 1799 that criminalizes attempts by private citizens to  intervene without authorization to try to negotiate disputes or controversies between the U.S. and foreign governments. No one has ever been convicted of violating the law.

It is no accident that former National Security Adviser Michael Flynn reportedly fell into the Logan Act trap when he discussed the Russia sanctions with Russian Ambassador to the United States Sergey Kislyak.

A National Security Agency transcript of the Flynn-Kislyak discussion was illegally leaked to the media. Anti-Trump Justice Department official Sally Yates, who briefly served as acting attorney general before she was fired by President Trump, used this intelligence against Flynn with Trump administration officials.

It’s too bad that the authors of the Post article did not explore the suspicious nature of President Obama’s last-minute Russia sanctions on Russia. The sanctions appear to have been part of a larger strategy by the Obama administration, the Clinton campaign and the Democratic National Committee to abuse the enormous power of U.S. intelligence agencies, the FBI, the Justice Department, and the Office of the President to discredit and defeat candidate Trump and then cause problems for President Trump.

But expecting the Washington Post to do these things is too much to hope for from one of America’s leading Fake News outlets.