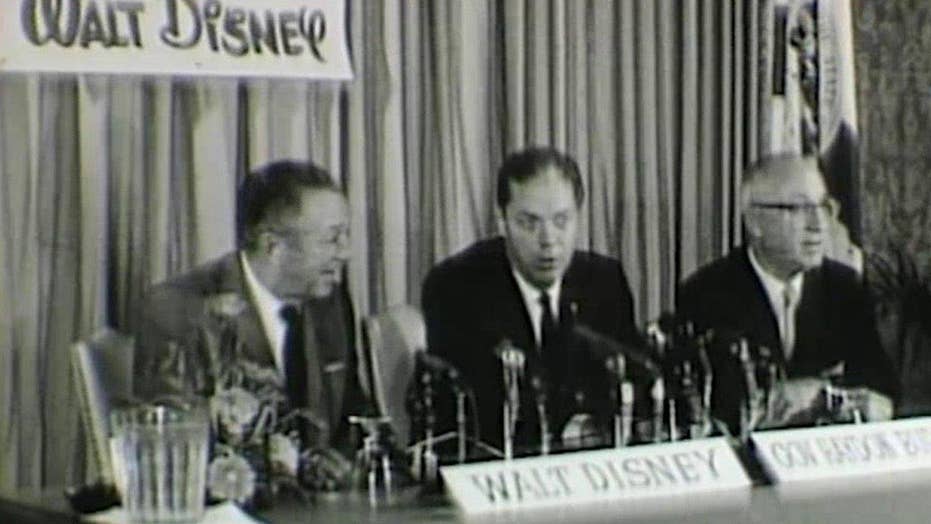 Walt Disney was an unpretentious everyman, a farm boy from Missouri who happened to make motion pictures. His common touch enabled him to reach a broad cross-section of the American public. “I don’t pretend to know anything about art,” he once said. “I make pictures for entertainment, and then the professors tell me what they mean.”

Though humble and unassuming, Walt was a creative genius. The Disney Studio was a vibrant community of artists who elevated animated cartoons to amazing heights of artistry. Walt himself was the guiding, driving force behind every cartoon and animated feature. His art was pure, free of pretense and snobbery. He aimed his creations at the public, not the critics.

Fantasy writer Ray Bradbury says that the genius of Disneyland is its ability to make the surreal real. “I shall be indebted to Walt,” he once said, “for his ability to let me fly over midnight London in his Peter Pan ride.”

Yet the critics and the international arts community applauded his work during the 1930s and early ’40s. In 1937, surrealist painter Salvador Dalí journeyed to California, then wrote to his friend, poet André Breton, “I have come to Hollywood and am in contact with the three great American surrealists — the Marx Brothers, Cecil B. DeMille, and Walt Disney.”

After "Fantasia" and "Pinocchio" lost money in 1940, Walt lost his appetite for risk-taking. By the late 1940s, he was producing movies built on safe, proven formulas — animated anthology films like "The Three Caballeros" (1945) and "The Adventures of Ichabod and Mr. Toad" (1949), and hybrid animation-and-live-action films like "Song of the South" (1946). The arts community turned away from Walt, believing he had sold out to make “kiddie films.”

But Walt hadn’t sold out. Since the early 1930s, he’d been planning his boldest project of all. He was moving beyond the ink and paint of animation to a new medium of expression. On July 17, 1955, Walt unveiled an innovative form of three-dimensional art. Today, we call it a “theme park,” but it’s so much more than that.

Disneyland is a full-immersion multimedia experience combining motion, sound, music, light, color, fact, fantasy, and more. On opening day in 1955, Disneyland was the world’s largest art object, consisting of 85 acres of attractions, landscaping, and backstage areas. (When Star Wars Land opens in 2019, Disneyland will expand to 100 acres.) Disneyland is art that engulfs you, surrounds you, and transports you into the past, future, or realms of pure imagination.

Fantasy writer Ray Bradbury says that the genius of Disneyland is its ability to make the surreal real. “I shall be indebted to Walt,” he once said, “for his ability to let me fly over midnight London in his Peter Pan ride.”

Most reviewers panned Disneyland’s opening day. Only one reviewer, Will Jones of the Minneapolis Tribune, understood what Walt had achieved. He wrote, “If it’s an amusement park, it’s the gosh-darnedest, most happily-inspired, most carefully-planned, most adventure-filled park ever conceived.” The millions who streamed through Disneyland’s gates fell in love with everything Walt loved — steam trains and fantasy castles, riverboats and rocket ships.

During Disneyland’s early years, sharp-eyed guests often spotted Walt on a park bench, eating a hot dog, or riding the attractions so he could hear people’s comments for himself. Walt’s set decorator, Emile Kuri, who worked on "Mary Poppins" and "20,000 Leagues Under the Sea," liked to hang out with Walt at Disneyland. He and Walt would sit on the porch at City Hall and watch people entering the park.

One time, Walt and Emile saw a pair of nuns leading a group of more than twenty orphan children into the park. Walt jumped up and rushed over to them.

“I’m Walt Disney,” he told the astonished nuns. “Wait here!” He left them, then returned a few minutes later, his hands filled with cash. “Here’s your money back,” he said. “And here are tickets for the attractions. Enjoy yourselves. I’ve made lunch reservations at the Plaza Inn — free hot dogs and hamburgers and apple pie for all of you.”

Walt was an artist and a humanitarian. He loved using his park to make people happy.

Today, there are six Disney theme parks around the world, but Disneyland is the only park that literally has Walt Disney’s fingerprints on it. It’s his masterpiece, yet it remains unfinished. “Disneyland will never be completed,” he said. “It will continue to grow as long as there is imagination left in the world.”

Jim Denney is the author of "Walt’s Disneyland: It’s Still There if You Know Where to Look", a guide to Walt Disney’s theme park legacy. He blogs at WaltsDisneyland.Wordpress.com.