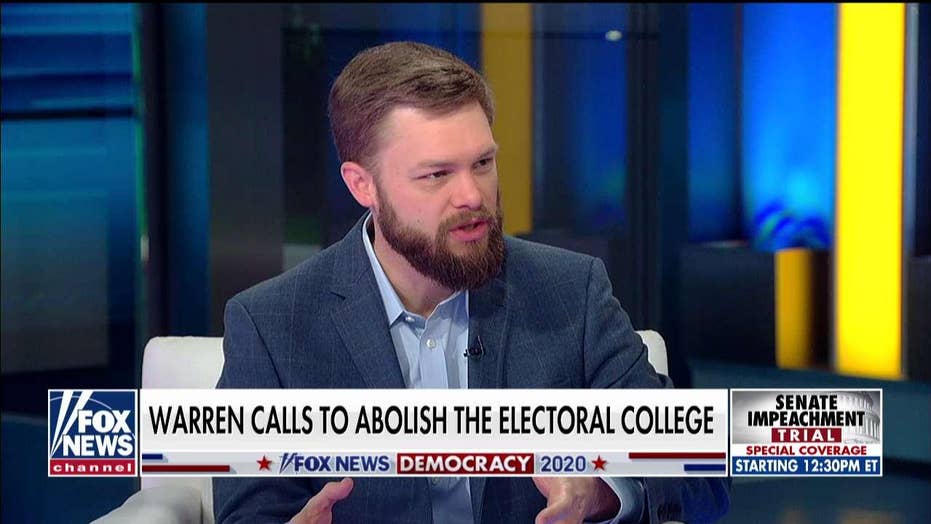 Op-ed author: The left is moving forward on nullifying the Electoral College

In his recent op-ed for Fox News, author Trent England attacks Sen Elizabeth Warren's proposal to eliminate the Electoral College by defending the winner take all laws used by 48 of the 50 states to appoint electors to the Electoral College, saying: “A vast and diverse nation like the United States needs systems that push politicians to consider the interests of many different kinds of people. The Electoral College helps to do this.”

In 1823, nearly 35 years after the Constitution was adopted, James Madison said he didn’t like winner take all because it excluded political minorities in the states from having a voice in the election of the president. When a candidate gets 51 percent of the votes, the entire voice and vote of the other 49 percent is gone. Madison thought that was not helpful to the Republic. Madison was right, England is wrong.

It is the winner take all laws, not the Electoral College, that have led to the current battleground state problem in this country. Only eight to 12 states have any meaningful input into who becomes president.

We need a system that increases, not decreases, the importance of each vote in this country.

We know those states: Florida, Ohio, Iowa and the states like those that we hear about on the news. That means, as I see it, 80 percent of the voters of this country are excluded from any meaningful input into who becomes president of the United States. In fact, anyone who honestly discusses presidential elections will tell you that battleground states drive policy in Washington.

If the issue is not important to Florida or Ohio, it’s not important to presidential candidates. Why did the fiscally conservative President George W. Bush push “free drugs for seniors” in Medicare Part D? According to former Rep Tom Tancredo, R-Colo., he did it for the senior vote in Florida.

That’s why Congress left the roll open for an unprecedented three hours to get that last needed vote. Or take the No Child Left Behind initiative, the largest intrusion by the federal government into local control of schools? In my opinion, to win over the soccer moms of Ohio. Those policies didn’t promote small states or rural areas. Those policies promoted the issues important to battleground states.

If someone really supports the Electoral College, intellectual honesty requires them to truthfully describe the problem created by our current system and look for the solution that preserves the Electoral College while at the same time increases the number of voters who would have meaningful participation in the selection of the president.

The National Popular Vote Interstate Compact (NPVIC), does just that. It utilizes the language of the Constitution on the Electoral College to create an interstate compact in which the member states award all their electors to the person who gets the most votes in all fifty states and the District of Columbia.

The compact takes effect when states equaling 270 electors join the compact, guaranteeing the presidency to the person who receives the most votes in all 50 states. It doesn’t shift more power to big cities.

According to U.S. Census data, about 60 million people live in the 100 largest cities in this country, roughly the same number as live in rural areas. It doesn’t hurt the small states because, in fact, under the current system, 92 percent of the small states have no meaningful participation in electing the president.

Big states won’t control the election, either. Once again, according to U.S. Census data, the four largest states, California, Texas, Florida and New York have 33 percent of the population of this country.

Want to make Wyoming more important in an election? Make a vote in Wyoming exactly equal to a vote in Florida. The NPVIC does just that. More importantly, the compact preserves and protects the Electoral College by actually fixing the battleground state problem, which right now excludes 80 percent of this country’s voters from meaningful participation in presidential elections.

In fact, the NPVIC would stabilize our Republic. England raises a lot of scary scenarios. However, none of those things have ever occurred in California, the largest popular vote election in the country.

If England were correct, all of his scary scenarios would have already occurred in California. Since they have not occurred in California, they will not occur in a popular vote election in the entire country. Most importantly, everyone would accept the winner because the winner would receive the most votes. That’s what most people expect to happen.

We need a system that increases, not decreases, the importance of each vote in this country. The winner takes all limits voter participation; the NPVIC increases it, by making every vote in every state important in every election.

Ray Haynes is a senior consultant to the National Popular Vote, Inc. a non-profit organization. Ray was first elected to the California State Assembly in 1992. He served in the California State Senate from 1994 to 2002, including as Senate Republican Whip and Chairman of the Senate Constitutional Amendments Committee. In 2000 he served as National Chairman of the American Legislative Exchange Council (ALEC). Haynes was again elected to the Assembly in 2002, where he served as Assistant Republican Leader. He is a graduate of the University of Southern California Law School.