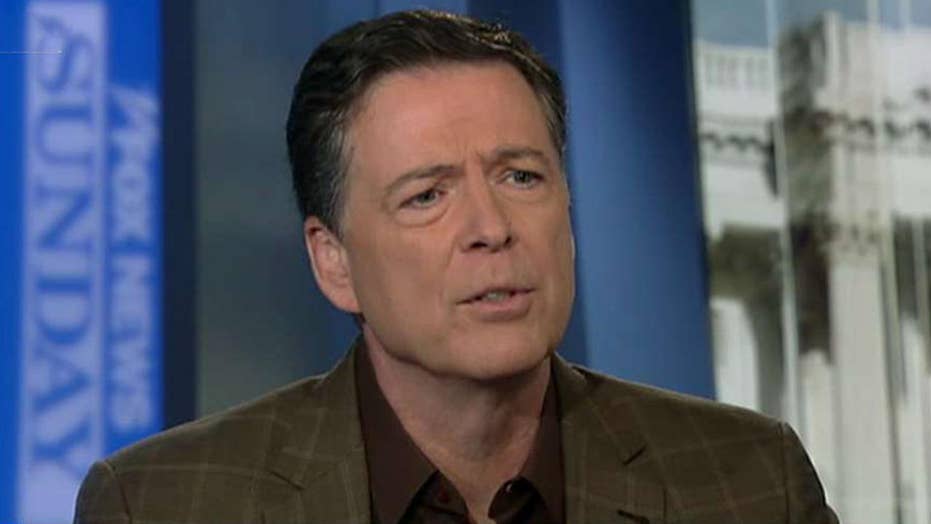 Comey: 'I was wrong' to say FISA process was 'followed'

One, they ran the nation’s key intelligence and investigatory agencies under former President Barack Obama. They were deeply involved in the “Russian collusion” hoax. And they participated in the surveillance of the Trump campaign and transition.

TUCKER CARLSON: CAN WE TRUST THAT THE FBI IS NO LONGER BEING USED AS THE LEFT'S POLITICAL TOOL?

Clapper, Brennan and the FBI helped to disseminate the fallacious Steele dossier to the press and among government agencies.

Two, Comey, McCabe, Brennan and Clapper have all lied either under oath or in the public sphere.

Horowitz has said that he referred Comey for criminal prosecution for leaking classified memos he wrote about his confidential conversations with the president, but the Justice Department did not pursue charges. Comey signed FISA warrant applications that the inspector general has determined were misleading at best and at worst simply flat-out wrong.

In testimony before the House Judiciary and Oversight Committees, there were 245 occasions on which Comey claimed he couldn’t remember details or couldn’t answer questions.

Comey did not tell the truth when he said the Steele dossier was not the prime evidence that he submitted to the FISA court. He also lied about when he was briefed on the dossier.

McCabe was given a criminal referral for lying to federal investigators. His story about conspiring to catch Trump on tape in an effort to remove him under the 25th Amendment cannot be reconciled with the version of the account told by his apparent partner in that gambit, former Deputy Attorney General Rod Rosenstein.

Brennan has on two occasions lied under oath to Congress, first about collateral deaths caused by drone strikes abroad, then about CIA spying on Senate staffers’ computers. Clapper got caught lying about the surveillance of U.S. citizens and claimed he gave the “least untruthful” answer. Both have given accounts of their knowledge of the Steele dossier that are contradicted by a number of sources. Clapper falsely claimed of the dossier that “more and more of it has been corroborated.”

Three, all four of these former intelligence chiefs detest the president of the United States.

Comey has compared Trump to a Mafia don and stated that he is morally unfit to be president. McCabe, who was likewise fired from the FBI, has called Trump’s behavior “disgusting.” Clapper said that Trump may be working with Putin as a Russian “asset.” Brennan called Trump a “disgraced demagogue” as well as venal, corrupt and amoral.

Four, all in their post-Obama administration careers are either paid cable news analysts or frequent guest commentators. Clapper is a CNN security analyst. Brennan was hired by MSNBC for a similar role. McCabe is a CNN contributor. Comey often makes guest appearances on news programs as a political and intelligence expert.

In the most controversial stories, Brennan, Clapper and McCabe are being paid to analyze theories, facts and findings in which they themselves are often central players. As a guest commentator, Comey has weighed in on these controversies even as he distorts his past role in them.

Yet such abject conflicts of interest are not the only ethical problems posed by these four. Until recently, all four held federal security clearances. Comey recently gave his up, apparently so he would not have to give testimony about classified information in the Horowitz investigation. The former intelligence officials sometimes gave us wink-and-nod suggestions that their television expertise was based on information not available to the general public.

In sum, we are witnessing a surreal collusion between the nation’s former top intelligence officials and the progressive media — beyond even the nightmares of so-called conspiracy theorists.

The most powerful intelligence chiefs of the Obama administration — Brennan, Clapper, Comey and McCabe — have routinely offered the nation their own warped theories about wrongdoing in high places that are as self-serving as they are contradicted by facts.

The conclusions of both the Mueller investigation and the Horowitz report are damning to the past analyses of all four.

In the advocacy culture of our new media, ex-government officials such as Brennan, Clapper and McCabe can be paid to appear on news programs to analyze (or vindicate) their own unethical behavior.

As employees of the media, they sell their checkered government service to exonerate themselves while confirming the anti-Trump biases of their paying hosts.