As Vice President Mike Pence, his wife Karen, and their daughter-in-law Sarah got off Air Force Two in Rome this morning, it hit me what an action-packed week they have had.

Monday was a memorial service for Reverend Martin Luther King Jr. at Holy City Church of God in Christ in Memphis, Tennessee.

Thursday, the Pences were in Jerusalem at the Auschwitz Remembrance Day ceremony with leaders from 50 other nations.

Now, today, they are in Rome as the vice president visits with Pope Francis and meets with leaders of the Italian government.

What is impressive about the range of activity of the week (in both geography and substance) is how strong Vice President Pence’s messages have been.

In Memphis, he articulated the importance of Reverend King for all of us – outlining the moral cause he represents and the need for each of us to be committed to a unified America in which every person truly has the opportunity to pursue happiness.

Here is Vice President Pence speaking to the Holy City Church of God:

“Dr. King could see all that ahead because he had hope. And that hope came from his faith in God. As he said during his famous march in 1963, quote, 'This is the faith that I go back to the South with. With this faith, we will be able to hew out of the mountain of despair a stone of hope.’ He went on to say, 'With this faith, we will be able to work together, pray together, struggle together, go to jail together, stand up for freedom together, knowing that we will be free one day.’ For Dr. King knew: ‘Where the spirit of the Lord is, there is freedom.’

“Dr. King challenged the conscience of a nation to live up to our highest ideals by speaking to our common foundation of faith. He touched the hearts of millions of Americans, and his words continue to inspire through this day. ...

“And as we mark this Founder’s Day at Holy City; tomorrow, as Americans remember the life and legacy of Dr. Martin Luther King, Jr., I know in my heart of hearts that if we rededicate ourselves to the ideals that he advanced, if we strive to open doors of opportunities for every American, and if we more faithfully follow the one that he followed, we’ll see our way through these divided times, and we’ll do our part, in our time, to form a more perfect union in this one nation, under God, indivisible, with liberty and justice for all.” 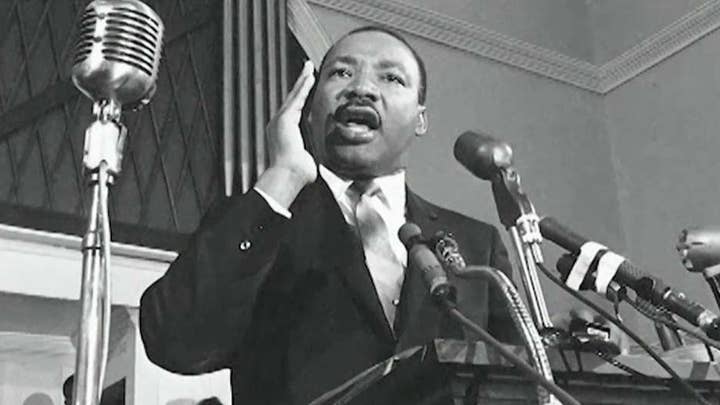 This was truly a powerful unifying message in our divided, troubled times.

Then, in Jerusalem, the vice president spoke eloquently at the 5th World Holocaust Forum at Yad Vashem:

“Here on Mount Herzl, we gather to fulfill a solemn obligation – an obligation of remembrance: to never allow the memory of those who died in the Holocaust to be forgotten by anyone, anywhere in the world.

“The word 'remember’ appears no fewer than 169 times in the Hebrew Bible -- for memory is the constant obligation of all generations.

“And today we pause to remember what President Donald Trump rightly called the 'dark stain on human history’ -- the greatest evil ever perpetuated by man against man in the long catalogue of human crime.

“Today we remember what happens when the powerless cry for help and the powerful refuse to answer....”

Vice President Pence went on to speak directly about Auschwitz and the more than 1.1 million who perished there at the hands of the Nazis.

“As my wife and I can attest firsthand, from this past year, one cannot walk the grounds of Auschwitz without being overcome with emotion and grief. One cannot see the piles of shoes, the gas chambers, the crematoriums, the lone boxcar facing the gate to the camp, and those grainy photographs of men, women, and children being sent to their deaths without asking: 'How could they?’”

Turning from the past to the future, the vice president announced that Prime Minister Netanyahu, along with Blue and White Party leader Benny Gantz, will soon come to the White House to meet with President Trump to work out regional challenges and ways to return peace to the Holy Land.

Then, after all this, the vice president and his wife joined us in Rome. Their endurance leaving Israel very early, landing in Rome, and going directly to a long audience with the Holy Father, was impressive to say the least.

The Associated Press described just how successful his visit was, reporting: “Pence’s visit and audience — at an hour’s length, a remarkably long one at the Vatican, especially for one not involving a head of state.”

As ambassador, my wife Callista has gotten to know the senior Vatican officials incredibly well. She reports that the meeting with the top Vatican officials after the audience with the Pope went very well and covered a number of practical topics where the United States and the Vatican can cooperate around the world. Vice President Pence and his wife Karen made an extremely favorable impression on the Vatican leadership and strengthened our position in working together on humanitarian issues and on religious liberty.

Since Rome contains both the Vatican and the capital of Italy, the vice president extended his visit to include separate meetings with Italian President Sergio Mattarella and Premier Giuseppe Conte.

If this isn’t enough, they are traveling with their daughter-in-law Sarah, whose husband Michael is a captain in the Marines. The second lady is meeting with military spouses as they travel.

Finally, the vice president also spoke via video to the March for Life in Washington. His commitment to life, combined with President Trump becoming the first president to speak at the March for Life, makes this a truly historic date for those who want to protect the lives of innocents.

And, of course, as the Senate drones on in the most absurd impeachment effort in history, the vice president has taken every opportunity to stand with the president and bluntly describe the phony and unconstitutional process the Democrats have undertaken.

It has been an amazing week for the vice president and his family. They have worked steadily to strengthen causes of life, liberty, dignity and justice.