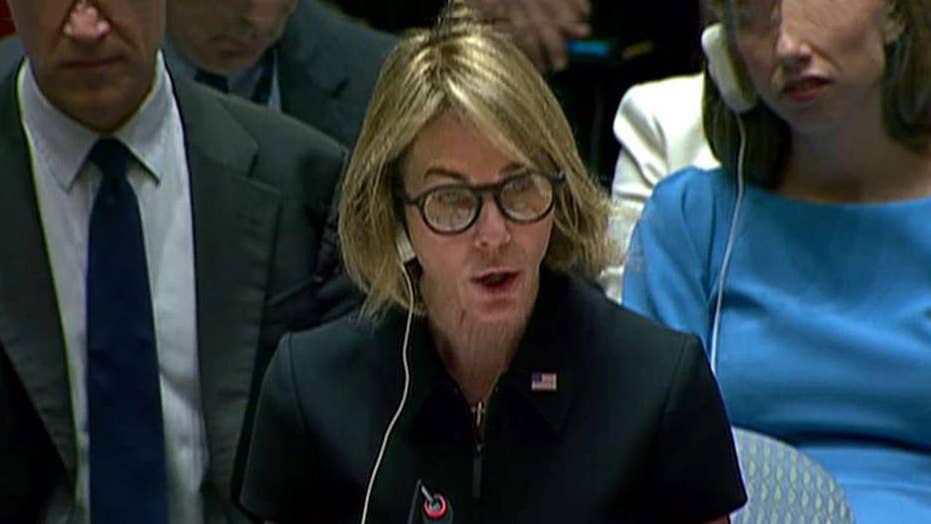 Craft vows to be a strong voice for 'America's unwavering commitment to democracy, freedom, human rights...'

Tuesday marks the opening of the 74th annual session of the United Nations General Assembly. The founders did well to select New York City as the U.N.'s permanent headquarters to help ensure America’s commitment to the viability and success of the organization.

The Geneva-based League of Nations had in large part failed because of our failure to ratify the Treaty of Versailles ending World War I and refusal to join the League. Avoiding President Woodrow Wilson’s mistakes, Presidents Roosevelt and Truman ensured bipartisan support for the new institution.

Despite the continuity of U.N. sessions, the original consensus has frayed somewhat in recent years, and the United Nations is often underappreciated and sometimes disparaged, in large part because of frustration over our inability to do a better job of solving the world’s problems.

The first thing to remember about the U.N. is that it consists of member states. Collectively, our countries are responsible for the state of the world and it is only through effective joint action that we can deal with the problems that confront us. The U.N. is not some sort of disembodied entity. We are the United Nations.

Next, the highest organ of the U.N., the 15-member Security Council, through binding resolutions, can compel member states in matters of threats to international peace and security.

At this very moment there are 16 international peacekeeping missions mandated by the Security Council, comprising a total of more than 100,000 personnel in such trouble spots as the Democratic Republic of Congo (DRC) and South Sudan. Virtually none of those 100,000 military are U.S. personnel, thereby sparing us exposure to the risk of sending even more people into harm’s way overseas.

While the record of these peacekeeping missions has been mixed, there have been notable successes. For example, when I arrived in New York in 2001 to take up my post as the United States' permanent representative to the United Nations, the country of Sierra Leone was in dire straits. A criminal “blood diamond” enterprise controlled most of the country. The authority of the legitimate government was limited to a small area within the capital, Freetown. With the help of British forces and a U.N. peacekeeping mission, government authority and peace were established throughout Sierra Leone in a matter of a couple of years.

There is no better example of effective Security Council action than UNSC Resolution 678. The resolution gave Iraq until Jan. 15, 1991, to withdraw its forces from Kuwait, which it had invaded on Aug. 2, 1990.

If Iraq’s forces were not withdrawn by that deadline, then the resolution authorized the use of “all necessary means” (including force) to expel Iraq’s troops from Kuwait. In addition to being a significant feat of American diplomacy, Resolution 678 gave the United States and its coalition partners the legitimating imprimatur to take the military actions which followed. We did not have similar U.N. legitimation for what we did in the second war with Iraq and consequently paid a high price in blood, treasure and political backlash.

Another aspect of U.N. activity deserving recognition is that of its specialized and related agencies. In the late 1970s and early 1980s, the U.N. High Commission for Refugees (UNHCR) provided secure shelter in Thailand, Malaysia, Indonesia and the Philippines for Vietnamese and Cambodian refugees fleeing repressive political conditions in their countries and then facilitated their resettlement to third countries.

Today, the UNHCR is working hand-in-glove with the international community to help deal with close to 71 million forcibly displaced people around the world, 26 million of whom are classified as refugees. And the number is growing.

Other agencies are making similarly valuable contributions to our safety and well-being. To mention just two: The International Atomic Energy Agency (IAEA) plays an indispensable role in support of our non-proliferation objectives through the inspection and monitoring of nuclear energy plants around the world. It is also instrumental in promoting peaceful uses of atomic energy, in keeping with President Eisenhower’s “Atoms for Peace” address to the United Nations General Assembly on Dec. 8, 1953. And the International Maritime Organization (IMO) sets international standards for navigational safety and the protection of our marine environment.

We do well to appreciate the multiple ways in which the U.N. touches our lives, whether it in the field of combating international terrorism, promoting airline safety or mediating serious international disputes. Even though we remain the strongest nation in the world, both economically and militarily, we only represent four percent of the world’s population and cannot possibly deal with the world’s challenges all by ourselves.

It is imperative that we work closely with others in dealing with the myriad problems facing this world. Whatever its blemishes, the U.N. is a good vehicle for mobilizing international collaboration, and has served our nation’s interests well in the past. It deserves our continued support and participation in the future.

John Negroponte is vice chairman of McLarty Associates. He has served as ambassador to Honduras, Mexico, the Philippines, the United Nations and Iraq. He served in President George W. Bush's Cabinet as the first director of national intelligence. His most recent position in government was as deputy secretary of state, where he served as the State Department’s chief operating officer.