Tucker: Voters in Alabama decided for their state

Abortion has never been popular in the state of Alabama. Since 1973, when a handful of Supreme Court justices imposed the most left-wing abortion regime in the world by fiat, voters in Alabama have strongly disagreed with the ideology of Roe vs. Wade.

On Tuesday night, after 46 years, they finally enacted their views into law. Lawmakers there voted overwhelmingly to ban most abortions in Alabama and by the way, just in Alabama, nowhere else -- a law like this would not pass in Maryland, in New Jersey or Massachusetts or pick a state. It applies only in a state where a strong majority agrees with it, where it reflects that community's values. That's called self-government. It's how democracy is supposed to work.

Our ruling class doesn't care though they no longer believe in democracy. So the idea that somewhere, a thousand miles from Brooklyn in some little town in Alabama, there might be a person who disagrees with their views on abortion, or gun control or name a topic. That idea drives them completely insane. It eats at them. It keeps them up at night. It must be stopped.

Well, CNN is the network for people who feel this way, who as watch one of their anchors solicit advice on how to subvert the will of Alabama voters. Here’s this excerpt from an interview with research psychologist Peggy Drexler who talked with CNN anchor Brooke Baldwin recently:

Peggy Drexler: My feeling is that there are things we can do.

Drexler: For people who want to protest.

Drexler: Yes, first of all, we can talk to the men in our lives and figure out who are the men that are not supporting this. We can contribute to Planned Parenthood. We can go and say, this isn't what we want. This really, really -- it is the most restrictive law yet for abortion. Why not do something on a larger scale?

Yes, CNN thinks you should donate to Planned Parenthood. Over on "The View," Joy Behar, who is both the single unhappiest person in the world and also an important figure in Democratic politics, went even further than that and called for eugenics. She demanded that Alabama's lawmakers be sterilized on the basis of their sex and skin color. She pointed to “a panel of men who did this” and noted that “they’re all white guys. Maybe we should make it a law that they should all be required to get a vasectomy. That group in particular.” 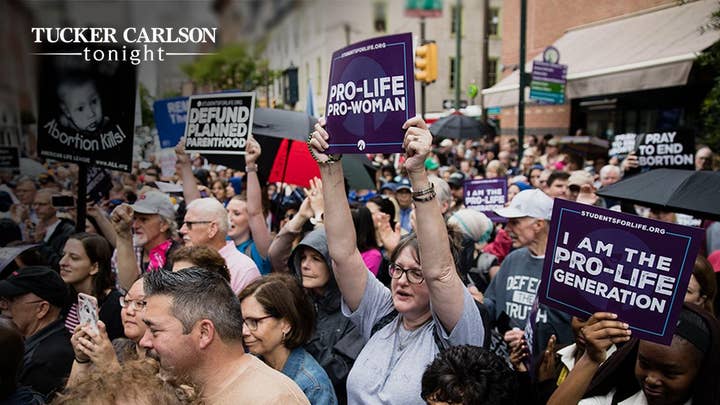 Well, Behar is a sub-genius, granted, and she is not elected to anything either, at least for now. Bernie Sanders, though, is. He is a sitting U.S. senator and on Wednesday morning he tweeted this "Abortion is a constitutional right," which is almost as dumb as anything Joy Behar has ever said. Abortion is not a constitutional right. It is not mentioned in the Constitution. It's not even hinted at.

The legal reasoning behind Roe vs. Wade is a joke. Even pro-choice legal scholars will admit that if you ask them in private. But in public, nobody can say that, nobody can deviate from the party line. Everyone must read from the talking points provided by the abortion clinic lobbyists from NARAL, and so they do.

Here’s what three U.S. senators, who are also running for president, said:

Sen. Kirsten Gillibrand, D-N.Y., Well, this is an outrage and it's nothing short of an attack on women's basic human rights and civil rights.

Sen. Kamala Harris, D.-Calif.,  Today, where we saw what happened in Alabama, let us all agree that women's health care is under attack and we will not stand for it.

So this is the modern Democratic orthodoxy. If you love women, you'll encourage them to kill their own offspring. If you acknowledge that children are sacred, that being a parent is honorable and necessary, and maybe even more meaningful than a trip to Ibiza this summer, then you, sir, are an oppressor. You hate women.

In case you haven't noticed, it's almost a perfect inversion of common sense and of nature itself. It's grotesque. So what's the thinking behind it? We will let actress, Alyssa Milano explain. She says, “I don't think there's a human on the planet that is not pro-life. Nobody wants to get an abortion. Nobody. We are all pro-life. But there are circumstances that we cannot avoid. There's the mother's health. There's just not being ready, you know, and what that means financially and for someone's destiny. This is an economic issue.

Oh, it's an economic issue. So thanks for the honesty, Alyssa. Without Roe vs. Wade, women might understand that they have the right to be mothers rather than just dutiful worker bees toiling for some company that doesn't care about them. They are made to start to understand that they could put their families first if they wanted before the interest of shareholders, you can't have that. It might hurt markets.

So our corporate tastemakers push the lie that abortion is liberation. Only in far away remote places like Alabama, do people miss that message and continue to believe that children are more important than market caps and stock prices.

But everywhere else the propaganda is working as intended. According to a new report by the CDC, America's fertility rate is the lowest it has ever been in the history of the country.

It's not that Americans don't want to have children, they do. According to Gallup Americans want just as many kids as they wanted 20 years ago. It's just they can't afford them anymore.

Our leaders tell us that's fine. It's totally okay. It's normal. You don't need children. Here is a new iPhone. We will pay for your abortion. Work harder. Stop complaining. Don't listen those people in Alabama, we will make them be quiet. Get back to work. You're liberated now.