Tucker: It's not critical race theory, it's racism

In 1851, a man called Samuel Cartwright came up with a fairly sophisticated scientific explanation for why so many slaves were running away from plantations in the American South. These fugitive slaves, Cartwright explained, were suffering from a medical disorder called "Drapetomania," a syndrome characterized by an "uncontrollable or insane impulsion to wander." That was the problem. It wasn’t that they disliked being enslaved, or yearned for freedom and basic humanity. No. The problem, according to Cartright, was that Black people as a group were inherently defective. They were drapetomaniacs. They were always running away. That’s what he said.

A hundred and seventy years later, it’s embarrassing even to repeat something this stupidity out loud. It’s so obviously insane. But you should know that drapetomania was taken very seriously at the time, and so was Samuel Cartright. Cartright was not a fringe character at all. He was a nationally prominent physician, and a former high-ranking army officer from Fairfax, Virginia. He went to Penn medical school. Samuel Cartright was a credentialed man of science who commanded the respect of the country.

Fifty years after the civil war, one of the country’s leading medical dictionaries continued to maintain an entry for drapetomania. In retrospect, of course, we’d call Samuel Cartright a bigot, which he undoubtedly was. But he was also more than that. Cartright was a practitioner of something called scientific racism. Scientific racism is deeper than simple prejudice. It’s the use to science to justify the dominance of one group over another group. Scientific racism has a history as long as science, simply because the impulse to dominate is inherent to human nature.

It’s not really about color, though it’s called racism. Instead, it’s about power. Martin Luther King wrote eloquently about this. So did Dr. Seuss. You might want to take a look, assuming you can still buy their books. The point is, scientific racism never actually went away. It’s still with us. No one talks about drapetomania anymore. Instead, our medical professionals and law professors and military leaders and politicians and cable news hosts have identified a new disorder they claim explains everything bad. It’s called Whiteness.

In the universities, it has become an article of faith that, were it not for the indelible stain of Whiteness, America could be a utopia. Only Whiteness stands in the way. That’s why we must abolish it. As Harvard magazine put it, "Abolish the White Race." Only then can we be happy. Lots of people seem to believe this. They’re not all bad people, just as not everyone who believed in Samuel Cartright in the 1850s was evil. Some people are just gullible. They’re looking for meaning in their lives. If you hand them a unified theory of everything, some percentage of them will buy it wholesale. There were nice people at Jonestown in Guyana. They just didn’t know any better. It’s their leaders you wonder about. They do know better, or they should. And when they talk about this new iteration of scientific racism — when they talk about "whiteness" — they sound like old-fashioned bigots.

This guy for example. His name is Eric Michael Dyson. He’s a tenured professor at some stupid college or other. He lives in a rich, almost exclusively white neighborhood. He goes on TV a lot. Read what he says about race, and ask yourself if he sounds any different from Bull Conner or David Duke. Only the colors have changed.

MICHAEL DYSON: In speaking about, you know, the maggots - I'm sorry, the MAGA - that is so corrosive in this political moment. … And we have stood by to see mediocre, mealy-mouthed snowflake white men who are incapable of taking critique, who are willing to dole out infamous repudiations of the humanity of the other. And yet they call us snowflakes, and they are the biggest flakes of snow to hit the Earth. They are incapable of criticism. They are incapable of tolerating difference. They’re scared of, "Oh, my god, critical race theory is going to kill your mother." And they don’t even know. They are not critical, they have no race, and they don’t understand theory.

White men, they’re the problem! You hear that so often that you don’t pause to consider what a change this is. It used to be, only a few years ago, that the one thing you couldn’t do in this country was attack people in public on the basis of their race. "I don’t like that group because of their skin color. Let’s hurt them." You couldn’t say that. It was the one unacceptable thing, and for very good reason. You can’t maintain a multiracial democracy unless people of every color have exactly the same rights and responsibilities under the law, and are considered of precisely the same moral value under God. That’s the most basic prerequisite for a multi-racial democracy. All lives have to matter, or it cannot work.

It’s pretty clear that our leadership class, for whatever reason, doesn’t want it to work. Obviously, they don’t. Look at what they’re doing. When you hear people ascribe blood guilt to a specific racial group — when you hear them talk about the sin of Whiteness — what you’re watching is the death of our future as a country. We can’t live in a nation of warring tribes. We know very well what that looks like. It’s the history of the world. It’s bloody and miserable and vicious. We can’t allow that. 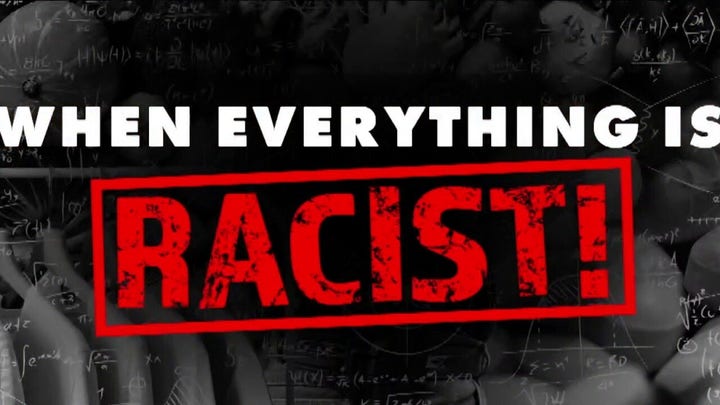 Most Americans of all colors on some level understand this. They don’t always have the words to articulate it. Their kids come home with school assignments that suggest all races are not, in fact, equal. Some races are guilty, and some are innocent. Some groups are oppressors, and others are oppressed.

In the universities, this is called "critical race theory," so that’s the term many people go with. "Critical race theory" — that’s what we so often debate on TV. But it’s an inaccurate way to describe what’s happening. Like so much academic jargon, the phrase "critical race theory" doesn’t mean anything. It obscures, rather than illuminates. It’s designed to confuse you. What’s happening in our schools and our military and our government is both simpler and easier to recognize than that. It’s not critical race theory. It’s racism. Not "neo-racism" or "reverse racism." Those are meaningless terms. It’s race hate, peddled by the people in charge in the hope it’ll make them more powerful. That’s all it is.

CRITICAL RACE THEORY IS ‘DESIGNED TO DIVIDE’ AND PARENTS ARE RIGHT TO CALL IT OUT: DOUGLAS MURRAY

We haven’t said that often enough or clearly enough. And because we haven’t — because we’ve been tied up in some pointless debate about a concept nobody can actually define — the race hate, and that’s what it is, has oozed from the universities and infected the entire country, including at the highest levels.

Mark Milley is the chairman of the Joint Chiefs of Staff. He didn’t get the job because he’s brilliant, or brave, or because the people who know him respect him. He isn’t and they definitely don’t. Milley got the job because he’s obsequious. He knows who to suck up to, and he’s happy to do it. Feed him a script and he’ll read it. Yesterday, the man in charge of the nation’s weapons, explaining that he’s working to understand a concept called "White rage:"

It's hard to believe that man wears a uniform. He’s that unimpressive. Notice he never defined White rage, and we should know what it is. What is White rage? Well, like drapetomania, it’s one of those diseases that only affect people with certain melanin levels. It’s a race-specific illness. That’s what Mark Milley has learned from reading about it. That’s why he’s making his soldiers read about it too. They need to know.

MILLEY: I’ve read Mao Zedong. I've read Karl Marx. I've read Lenin. That doesn't make me a communist. So what is wrong with understanding, having some situational understanding about the country for which we are here to defend? And I personally find it offensive that we are accusing the United States military, our general officers, our commissioned, our noncommissioned officers, of being "woke."

And by the way, if it’s a medical condition, at what age can you catch White rage? Most of us assumed our two-year-olds were just teething. Now we know it’s their whiteness that’s making them so angry. Thanks, Mark Milley. We appreciate your contribution to our generation’s scientific racism. By the way, have you read anything about wining wars recently? Apparently not.

We could go on — pundit after senator after professor after general — each one of them spewing race hate — whiteness! White rage! — dressed up as some new academic theory. We certainly have the tape. We’ll spare you. You’ve seen it. It’s everywhere. The question, how do we get out of this vortex before it’s too late? How do we save the country before we become Rwanda? What should we be teaching our children, so that they can live in a country that you want to live in, one full of many different kinds of people who actually like each other, who can work together, who are united by the fact that they are all Americans?  That’s the question.

This article is adapted from Tucker Carlson's opening commentary on the June 24, 2021, edition of "Tucker Carlson Tonight."