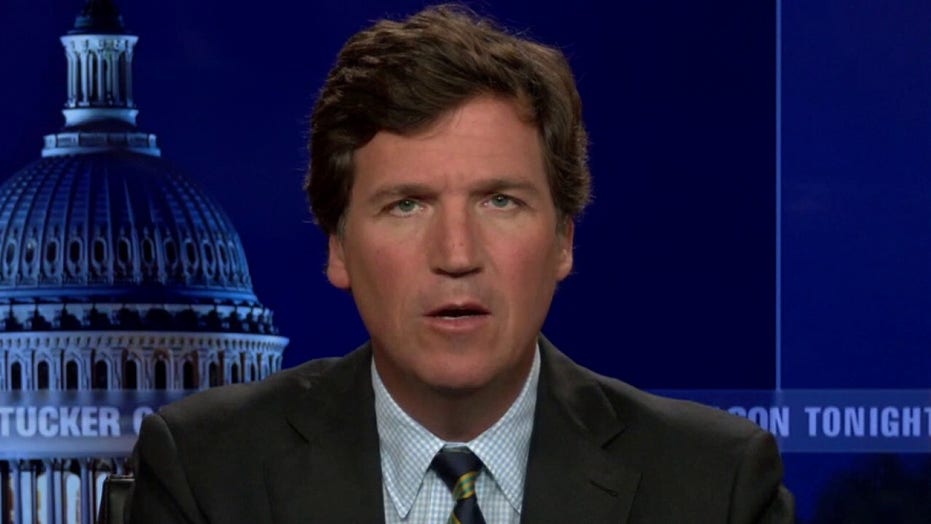 Tucker: Not only are these people crazed ideologues, they're stupid

The Fourth of July is still a day worth celebrating. Despite what you may read, day in and day out, this is still a great country. Where are you going to go that’s better? Nowhere. America is still full of happy, decent, independent-minded people. The attitudes of our leaders may have changed dramatically in recent years, but the virtues of our population really have not changed. That’s the good news. The bad news is, the people in charge are working hard to make Americans hate our own country. If you made the mistake of going online this weekend, you saw them pouring out their misery on social media. Instead of enjoying hotdogs and fireworks with the kids they don’t have, they were on Twitter yelping about slavery and White supremacy and what a terrible place the United States is. It’s easy to ignore people like this. You just turn off your screen and live your life. Unfortunately, it’s much harder to shield your children from them. That’s the problem.

Last week, the largest teachers' union in the country, the National Education Association, announced that its new, and first, priority is making racist anti-American indoctrination, race-based indoctrination, mandatory in every classroom in the country. All K-12 schools, the union declared, must teach children that, "White supremacy, anti-Blackness, anti-indigeneity, racism, patriarchy, cis-hetero-patriarchy, capitalism, ableism, and anthropocentrism" are embedded in every aspect of American "society." So, if you're a straight White American, even if you’re a very small child, you’re guilty. It’s your fault. You’re a bad person. That’s what teachers will be telling your children this fall.

The teachers’ union ended its statement with this, which is so hilariously revealing it belongs in a museum somewhere, and we hope it makes it. "As the ancient African proverb says, Know Thyself." The African proverb. Except it’s not an African proverb. "Know thyself" is, of course, Greek, as any literate person knows. It was inscribed by the ancient Greeks in the Temple of Apollo at Delphi. But the teacher’s union didn’t know this. Not only are these people crazed racist ideologues, but they’re also stupid. Your children are being taught by some of the most ignorant people in the country. How’d that happen? God knows how it happened. But you’d better not complain about it, or else Joe Biden’s praetorian guard will denounce you on TV as a racist:

CHRIS CUOMO: Gaetz and the other Trumpers want critical race theory to just be a foghorn. There are no more dog whistles. "This is about the woke-left making the white man pay for things!"

JOY REID: Claims of reverse racism have been the bread and butter of the modern Republican Party for decades. Now they have a new boogieman to latch onto, critical race theory.

It’s a boogie man! It’s not real, you imagined it, you’re crazy! Despite the fact THAT the teacher’s union just spelled out in a document calling for more, yes, critical race theory. But if you notice that, if you object in any way to the current obsession with race, the one subject no normal person really wants to obsess over, then you yourself are obsessed with race and must be stopped because you’re dangerous. That’s what they’re saying. Not just a few of them — all of them are saying that, and as always, they’re saying it in unison.

So what does the average person do about this? What does it take to fight back against it? Of course, you should be fighting back against it because everything’s at stake. You can’t have a multi-racial democracy if people retreat into their tribes and hate each other, as critical race theory teaches them to do. So what do you do?

Whatever you do, it takes courage. Daniel Concannon learned that the hard way. Until a few weeks ago, Concannon was an administrator at Northwest Elementary School in Manchester, New Hampshire. Like so many school employees, he was then forced to participate in training about the fundamental moral flaws inherent to white people. As an American, and a normal person, someone who admires Martin Luther King, he objected to this. On the other hand, he, like most people, had very little power to do anything about it. He wasn’t a rich person. He was making around $30,000 a year. He needed the job. But in the end, his conscience wouldn’t allow him to participate in something this poisonous. So he resigned.

You should read his resignation letter. He ends this way.  "I wish the Trotsky disciples at Manchester School District nothing but failure in their ongoing request for civilizational degradation. I leave you with the only verbal response befitting an attempt at anti-White indoctrination. F--- you."

It wasn’t so long ago, that Daniel Concannon, and men and women like him, would have been considered heroes. He’s a man of conscience, who's willing to sacrifice his own job to do the right thing. But he’s not considered a hero anymore. In fact, he’s effectively disappeared. You may not have heard his name until tonight. There aren’t a lot of Daniel Concannons out there, and that’s the point. The few that rise are muted so that no one will follow them. Corporate media has no interest in amplifying their stories. Here’s a father who showed up at a school board meeting recently and decided to tell a few obvious truths. 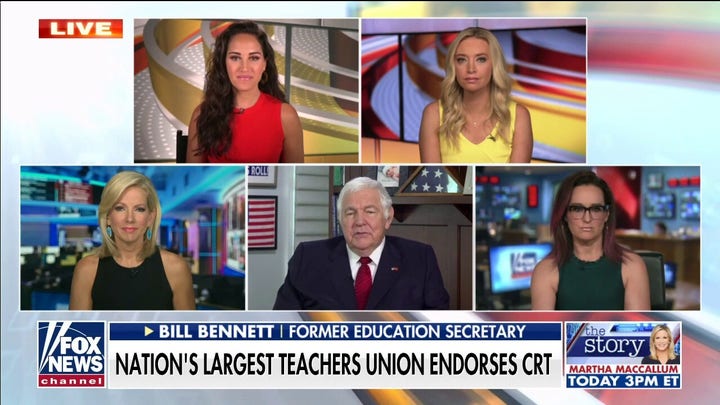 TY SMITH: You’re going to deliberately teach kids that he’s got it better than you because he’s white?  You’re gonna tell a white kid, ‘Oh, Black people are all down and suppressed.’ How do I have two medical degrees if I’m sitting here oppressed?  Two medical degrees. No mom or dad in the house. Worked my way through college. Hustled my butt off and got two degrees.  You’re gonna tell me white folks are gonna keep me from doing that? Are you serious?! … I do this stuff on a daily basis. I’m in the hood. I’m in the communities. I’m out there with folks in their face. I’ve been doing stuff since I was 18 years old, talking to Black folks. You know what? None of them are buying this nonsense. … Not one white person will ever keep them from getting there. This CRT stuff is BS.

Must be one of those alt-right QAnon people CNN is always warning you about. It’s BS, he said. The overwhelming majority of Americans and pollsters have found this pretty clearly, think this is insane. They think you should judge people by what they do, not on the basis of their skin color. They believe in Martin Luther King Jr.. So it is BS. In fact, it’s more than that. It’s civilization-ending poison.

But it’s everywhere. How widespread is it? Well, we can’t really be sure until we finally get cameras in the classroom, as we put them on the chests of police officers. Until we finally bet a civilian review board in every town in America to oversee the people teaching your kids, forming their minds. Until we do, we can’t know exactly how widespread this is.

But there are indications. We know that these ideas, this poison, have made it all the way to expensive private schools in central Ohio. Columbus Academy, one of the most prestigious schools in the state, is among them. Tuition is more than thirty grand a year per student. In the past year, Columbus Academy, which has a long history of academic excellence, has become race-obsessed. School administrators aren’t working to help unwed teenage mothers or improve Black neighborhoods. That might actually make the country better. If you want to talk about race, maybe you could improve someone’s life. But they’re not.

Instead, they’re doing what all guilty White liberals do. They’ve adopted the same familial racist curriculum: some people are better than others based on the color of their skin. A lot of parents went along with it. They didn’t say a word. They didn’t know what was happening, or they were too afraid to speak up. But two mothers decided they weren’t going to have it, so they objected. Their names are Andrea Gross and Amy Gonzalez. In January, they decided we’re going to fight this. We love the school, and we’re going to do something about it. They founded a group called the "pro-Columbus Academy Coalition." It was pro-Columbus Academy. They wanted to make the school better. Their mission was to stop the bigotry and return the school to its academic mission: teaching kids to read, teaching them history, showing them to do math.

The people who run Columbus Academy didn’t want to hear it. They didn’t want to have the conversation. They didn't want to listen. They wanted Gross and Gonzales to shut up and go away. But they wouldn’t. When you make a mother mad about her children, it’s hard to make her shut up. So, last month, instead of punishing them, the school decided to punish their children. Columbus Academy kicked their three daughters out of school. They expelled them for what their mother did. So, challenge the regime and we’ll hurt your children. The Soviets did it. Columbus Academy did it too.

The school’s headmistress, a confirmed mediocrity called Melissa Soderberg, sent a letter to every parent in the school explaining why she was punishing the children for the sins of the parents. But she didn’t write it alone. The letter was signed by the head of the Board of Trustees, someone you would think might know better, a local developer called Jonathan Kass, someone with a job, but he signed it. According to Soderberg and Kass, by daring to complain about racism at Columbus Academy, the two mothers had caused, "pain, and even fear for physical safety, among students, families, faculty, and staff." In other words, if you dare to question us, we won’t disagree with you, we’ll attack you, well hurt your children, and we’ll accuse you of assault. You’re making us afraid.

This article is adapted from Tucker Carlson's opening commentary on the July 6, 2021, edition of "Tucker Carlson Tonight."