Tucker: California is a symbol of everything wrong with this country

Are liberal policies making a mess of the Golden State?

For generations, California symbolized everything that was fantastic and was great about America.

It was the most beautiful place in the world -- snowcapped mountains, pristine beaches, lush inland valleys. But it was more than a vacation spot. California supported the biggest middle class in the country. It had an education system that was the envy of the world. It had gleaming infrastructure. California was the state that made the American dream a reality.

Now the State of California is known for a very different set of images: Needles and feces in the street, a dying middle class, the country's highest poverty rate, policies that prioritize illegal aliens over ailing American citizens. California is still a symbol. But today it's a symbol of everything that's going wrong with this country.

For Gov. Gavin Newsom, California is humming along nicely, apparently, and he now says the Republican Party is heading into the waste bin of history saying, "America in 2019 is California in the 1990s. The xenophobia, the nativism, the fear of the other, scapegoating, talking down or past people. The hysteria. And so we're not going to put up with that. We're going to push back." Newsom ended by saying, "What we're doing is working. I think Democrats are winning right now."

Apparently, somebody forgot to remind the governor that 40 percent of his state's population lives near poverty. And then having among the highest taxes in the country and cost of living isn't exactly giving them a leg up. And there's this: On July 1, California drivers will six more cents a gallon for gas taxes. That's on top of the 12 cents last year. And that's on top of already having the highest gas prices in the country. It doesn't appear drivers are winning.

Also on July 1, California begins background checks on customers buying bullets -- the cost $1.00 for every purchase. The check is meant to quickly return information on restrictions like a felony conviction, and non- California residents can no longer buy ammunition here, period.

Finally, a study by homeless advocates says people on Skid Row have less access to bathrooms than Syrian refugees, a problem which is vividly apparent to everyone in L.A. and San Francisco. But putting in more mobile bathrooms just in Los Angeles would cost $57 million a year. In other words, it's not going to happen. You've got to believe the homeless don't feel like they're winning, either.

While California wages war on its own middle class and tries to build men's room that cost as much as houses, the governor doesn't see a problem with the state. Tens of thousands of middle class families have fled and are continuing to flee every year. 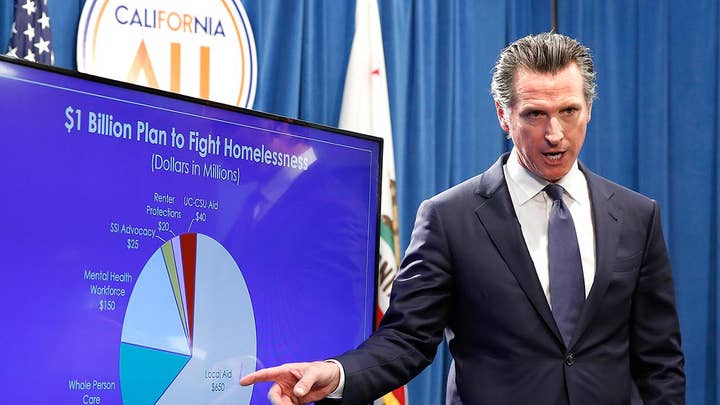 Meanwhile, Gavin Newsom travels to Central America, telling his citizens that his priority is helping people there. As the state disintegrates, Newsom says Donald Trump's version of the Republican Party is what's headed into the waste bin of history.

Maybe so. But California is going to get there a lot earlier.