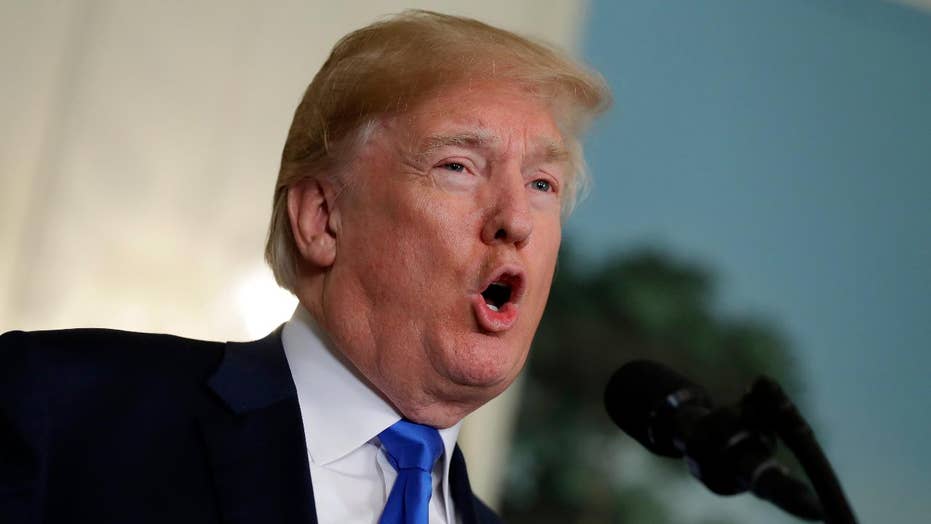 Trump announces tariffs and other measures on China

President Trump signed an executive memorandum Thursday slapping $50 billion in annual tariffs and other penalties on a broad range of imported Chinese products, fulling his campaign promise to challenge a rising and increasingly rogue China. The move is justified and long overdue.

The Office of the U.S. Trade Representative will publish a list of targeted products in 15 days. That will be followed by a 30-day period for public comment. Tariffs will not be imposed for 60 days, to allow time for comment.

Nervous traders on Wall Street initially sent stock prices tumbling in reaction to reports that the president would impose the tariffs. But in the long run, the president’s action will be a plus for the U.S. economy and preserve American jobs.

By acting decisively, the president has once again proven that he will take on the toughest of foreign policy challenges, knowing there could be major political repercussions. And while many pundits are calling the president’s action a mistake, the start of a potential trade war or even foolish, I have a better definition: it’s called leadership.

The rules enable the Chinese firms to routinely steal the intellectual property of the U.S. companies. This gives the Chinese the ability to use American-developed advanced technology to strengthen their own industries to better compete with American firms in China and around the world.

President Trump is saying, in effect, that he will not allow China to steal our trade secrets and then use those secrets to compete against us. He is pushing back against a Chinese government that is slowly but surely leveraging its newfound economic muscle – an economy worth over $11 trillion that is now the second biggest on the planet – to gain economic, political and military power throughout Asia and across the globe.

Consider for a moment some of the antagonistic actions Beijing has taken in the economic realm and beyond over the past few years. While the list below is certainly not comprehensive, it is long past time for Washington to react:

Intellectual property: As noted above, many U.S. firms can only gain access to the Chinese market if they agree to what amounts to surrendering their intellectual property when they partner with a local firm. Considering such property is the innovative blood of a first-class economy like America – and the fact that intellectual property theft could cost the U.S. as much as $600 billion annually – this is something that must be addressed.

In fact, some of the damage might be irreversible, with China now on its way to becoming the global leader in international patent filings – passing the U.S. in just three years – according to the United Nations .

Trade deficit: The U.S.-China trade deficit in 2017 rose to an astounding $375 billion. For an idea of the scale of such an imbalance in trade, it equals the total gross domestic product of Austria and nearly equals the GDP in the state of Maryland.

Just recently, the Trump administration has declared a goal of cutting our trade deficit with China by $100 billion annually – something that Chinese propaganda outlets did not take too keenly to.

Industry subsidies: We all know that a key part of the Trump administration’s plan to “Make America Great Again” is to encourage Americans to purchase U.S.-made products. China wants its citizens to buy Chinese products, but to achieve this goal the government is handing out massive subsidizes to its domestic industries so they can dominate the home market and the global economy of the future. This unfair practice puts U.S. companies trying to sell in China at a tremendous disadvantage.

China’s domestic industry subsidy program is called “Made in China 2025.” Beijing has set aside hundreds of billions of dollars for a plan to dominate and subsidize growing industries like robotics, 5G, bio-pharmaceuticals, artificial intelligence, electric cars and more in the next decade. China wants to make sure that it holds around 80 percent of its domestic market in just eight years – something not allowed according to World Trade Organization regulations – and wants to be a major player in trade around the world.

The New York Times reported this month that the European Union Chamber of Commerce in China concluded that the Chinese want to achieve their goal by providing “large, low-interest loans from state-owned investment funds and development banks; assistance in buying foreign competitors; and extensive research subsidies, all with the goal of making China largely self-sufficient in the targeted industries.”

Weapons designs: Beijing has embarked on a campaign to steal many of the most classified and lethal weapons systems the U.S. military has ever produced. The list of compromised military hardware is shocking. It includes systems such as the Patriot missile, the THAAD Missile Defense System, the F/A-18 Fighter, the V-22 Osprey, the new Littoral Combat Ship and many more.

Worst of all, many reports suggest China has successfully gained access to various design aspects of the $1 trillion F-35 program, the most important and technologically advanced U.S. military program in history.

While it is difficult to know how much of these actions are government sponsored, the reasons for such moves are obvious. With Beijing attempting to sell advanced military hardware around the world as well as build armed forces that could defeat the U.S. in battle, the motivations for such theft is clear.

As one senior Pentagon official put it to me recently: “China has stolen some of our most advanced military hardware designs. They need to pay a price for that.”

Federal employee data: In a breach of national security that was clearly unprecedented, the personal information of some 21 million Americans was stolen from the federal government’s Office of Personnel Management by what the FBI believes were Chinese-government hackers. The personal information came from current and former U.S. government employees and spouses of those employees.

The scale and scope of this cybertheft – more like cyberattack – should not be understated. These hackers stole countless pieces of personal information. This included detailed security clearance data and fingerprint information. This stolen material likely included the all-important SF-86 form, which is used for conducting federal employee background checks.

As a report from Wired explained, these forms can hold “a wealth of sensitive data not only about workers seeking security clearance, but also about their friends, spouses and other family members. They can also include potentially sensitive information about the applicant’s interactions with foreign nationals – information that could be used against those nationals in their own country.”

Military dominance: Over the last decade, Beijing has attempted to dominate large stretches of territory across Asia. This includes building islands to ensure its control of the South China Sea, the eventual subjugation of the island democracy of Taiwan, and pushing Japan out of the East China Sea. In addition, Beijing’s massive military build-up – including the deployment of new aircraft carriers, a massive missile force as well as modernized army – is all part of this plan.

The above only scratches the surface of China’s aggressive actions. In fact, I would argue that President Trump’s action on tariffs should be seen as a response to something that has been building for decades: a natural reply by our nation to defend our own economic, military and geopolitical interests.

We should view President Trump’s tariff move alongside other actions he is taking, such as creating closer ties with Taiwan and Vietnam, rebuilding U.S. military power and awakening of like-minded conservatives to the challenges posed by Beijing.

When looked at as part of this bigger picture, we can see the new tariffs on Chinese products are the beginnings of a comprehensive U.S. strategy that’s in our national interest and that will protect American jobs and our economy from China’s unfair practices.

My only regret is that past presidents did not have President Trump’s courage and did not punch back against China sooner.