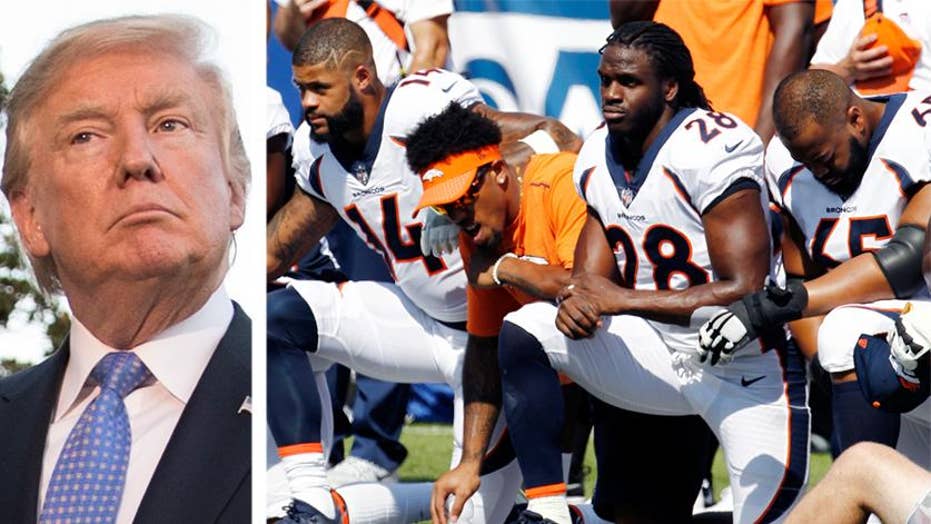 President Trump: NFL issue is not a distraction at all

Pete Hegseth speaks with the president about the NFL controversy.

This weekend’s big matchup, NFL v. Trump, was not so much a new development as a painful illustration of an existing truth: the American socioeconomic map is an invitation for bad actors with political ambitions. President Trump is a master-level agitator, but he did not create our nation’s divisions, nor did the athletes, who are being used by the left to inflame identity politics and perpetuate misunderstandings around what our nation is all about.

Both sides are instead opportunists who see that existing pain and division creates political opportunity. Thanks to media outlet Axios and the work of the Economic Data Institute, our nation’s terribly bifurcated economics – and, as a result, culture – can now be seen in one simple graphic. Axios chose shades of red and blue, but the takeaway is as stark as black and white (not a racial comment). We are two Americas – the haves and the have nots, the elites and the working class. We don’t understand each other, we don’t know each other, we don’t trust each other and we don’t like each other.

By definition, there is no anthem for a country like this. While many of us are horrified that anyone – anyone! – believes The Star Spangled Banner is a symbol of racism, we also cannot deny our gut sense that it has been a long, long time since all Americans heard the anthem in the same way. We haven’t broadly shared the goose bumps or teary eyes since the days following 9/11, and because of 9/11 we have forgotten how long it was before that.

Leveraging our divisions against one another is not new. The progressive left has been playing that cynical, damaging game for decades. Trump is what’s new. Now the political right has someone who sees the pain points and plants his political pole vault in the bull’s eye of cultural division.

Even the proof points of a divided America are not new. Social scientist Charles Murray has thoroughly diagramed the phenomenon in his work, culminating in his anti-depressant-worthy 2012 book “Coming Apart,” which explains the very real, very troubling and intractable class fracturing in America.

Leveraging our divisions against one another, for political gain, is also not new. The progressive left has been playing that cynical, damaging game for decades. We know their playbook as identity politics; they have been tragically corrosive.

Trump is what’s new. Now the political right has someone who sees the pain points and plants his political pole vault in the bull’s eye of cultural division.

A large and powerful nation that is no longer culturally united creates a wide-open playing field for bad politics. That’s what we saw over the weekend, and that’s why it was so upsetting. Neither side did anything new or particularly admirable. Both sides struck notes that resonated, but only within their target audiences.

Sports is now news and politics is, more than ever, an American blood sport. The divisions are not being created, but exploited. The challenge for America’s leaders – from athletes to elected officials – is to resist the temptation to play the game and instead think deeply about how to repair the field.