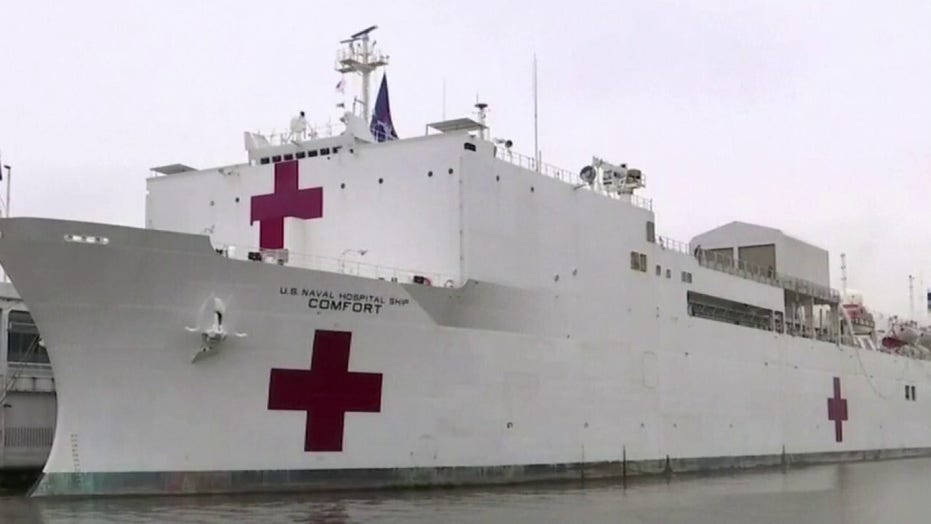 BENNETT & LEIBSOHN: CORONAVIRUS RESPONSE — COMPARE FLORIDA WITH NEW YORK, AND LOOK AT THE RESULTS SO FAR

“I compared Trump, who has called himself a wartime president, to the French general, Marshal Petain, who was in charge when the Nazis invaded and who essentially gave up and allowed them to occupy the country,” The Atlantic’s George Packer told “Morning Joe” Thursday. “Trump seems to be collaborating with the virus and doing its work for it.”

These comments are not just unhinged. The doorframe has been pried off and a wrecking ball has smashed the wall to smithereens.

On March 24, the Daily Beast anticipated a death toll between 200,000 and 2 million. Hence, “what determines whether 1.8 million people live or die … is how stringent our rules are on social distancing, quarantine, testing and treatment.”

“If the worst-case coronavirus scenarios are remotely accurate, more Americans could die from the pandemic than troops killed in every U.S. war combined,” Caleb Ecarma wrote in a March 25 Vanity Fair article headlined “Right-wing Media Is All Aboard Trump’s Coronavirus Death Train.” Ecarma thus worried that U.S. COVID-19 fatalities could exceed 1.35 million people.

Trump’s March 13 national-emergency announcement sprang largely from forecasts of flooded hospitals. A Mississippi River-style deluge of COVID-19 patients would cascade in and beg for beds, ventilators and doctors. Stretchers would swim in hallways as the infected waded into waiting rooms. And waited. And waited.

As befell beautiful Italy’s lovely people, older patients would be invited to expire politely in peace, as their lungs filled with fluid. Younger, heartier patients would receive scarce beds and breathing gear. After all, their entire lives stood before them, and the octogenarians collectively had enjoyed a pretty good run. Arrivederci, Nonna.

This 3D horror epic never transpired, thanks to the tireless labors of President Trump, Vice President Mike Pence and the President’s Coronavirus Task Force; devoted public servants at the Federal Emergency Management Agency (FEMA), Health and Human Services (HHS) and other agencies; America’s governors and CEOs; and the immeasurable sacrifice of doctors, nurses and first responders from Brentwood to Boston.

Like sandbags that came within inches of being overtopped but stood firm, hospital-bed supplies surpassed demand. Many of the 14,566 beds that the Army Corps of Engineers has built at 18 temporary facilities stayed empty. One 250-bed pop-up hospital in Seattle closed after a week. Not one patient arrived. Some 95 percent of Americans seriously have quarantined. They followed the president’s guidance, slowed COVID-19’s spread, curbed the need for beds, and thus dodged bedlam.

There’s a boat that’s leaving soon from New York. As Gothamites braced for a harrowing, COVID-fueled capacity squeeze, the 1,000-bed hospital ship USNS Comfort arrived March 30. But Comfort treated only 182 patients. The 2,106-bed infirmary that the Corps installed in just nine days at the nearby Javits Center eased pressure on the Comfort. This week, it steams toward its next mission. So, Trump over-responded. Would the Trump-nibbling hyenas prefer that he had under-responded?

New York’s Democratic Gov. Andrew Cuomo predicted March 24 that his hard-hit state needed 30,000 ventilators – a frightfully tall order. This ventilator drought never happened. Private companies heeded Trump’s call, hastened production, and assembled 11,327 of these life-saving devices. They are so abundant that Cuomo announced April 15 via Twitter: “We will be sending 100 ventilators to Michigan and 50 ventilators to Maryland.”

Meanwhile, Food and Drug Commissioner Stephen Hahn, M.D., has macheted through red tape to greenlight clinical trials for 72 potential COVID-19 vaccines and treatments. Another 211 related pharmaceuticals are speeding toward evaluation.

“More than 31,000 National Guard stood up around the country,” Pence said April 22. He added that 5,500 active-duty military personnel are fighting COVID-19, including 964 uniformed medical professionals serving 17 hospitals in seven states.

To date, FEMA, HHS and the private sector have harnessed 85 Project Airbridge flights to supply:

How does any of this constitute “collaborating with the virus,” as Petain’s Vichy government dispatched Jews into Hitler’s ovens?

Thankfully, some Democrats lack the weather-balloon-like detachment from reality that consumes Pelosi, Pressley and Packer. Other Democrats recognize that Team Trump furnished the tools they need to defeat COVID-19.

“Building four field hospitals,” said New Jersey Gov. Phil Murphy. “That was a decision the president, himself, took and I am grateful for it.”

“I want to thank the president of the United States, President Trump, who mobilized this effort, and he did it with all rapid speed,” Cuomo stated. “I’ll tell you, he’s been amazingly accessible,” the governor observed. “He has delivered for New York.”

“Every single direct request that he was capable of meeting, he has met,” California’s Gov. Gavin Newsom noted. He asked Trump for testing swabs on April 22. “So conversation, commitment, promise made, promise kept; 90,000 on the way, to be distributed tomorrow.”

Early headlines half-predicted/half-gloated: “Trump’s Katrina.” This brand-new disease triggered an unprecedented national emergency and yielded unwanted pain and death. But the devastation that could have engulfed America trails early warnings. Thanks to Team Trump and those they mobilized and inspired, unlike Katrina, this time the sandbags held, the flood crested and the levees remained unbreached.