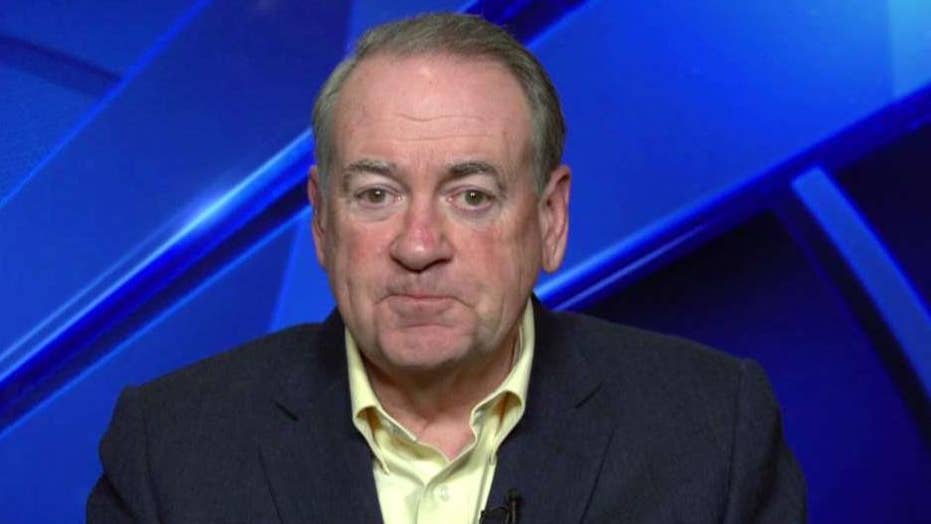 Fox News contributor Mike Huckabee reacts to the news of the day on 'America's Newsroom.'

Few politicians in Washington, even Republicans, have ever defended our Christian heritage on the national stage as fiercely as President Trump. His executive order affirming the religious liberty of public school students is just the latest example.

For the first time in nearly two decades, the order updates federal guidance to better protect students’ rights to engage in prayer and other forms of religious expression. Under the new rules, schools must certify every year that they do not have policies that restrict constitutionally-protected religious rights, such as the freedom to pray or read religious texts on school grounds. Schools that maintain non-compliant policies would lose their federal funding.

This is a big win for religious freedom advocates, who have found their rights and beliefs under increasingly withering assault from the left for decades. In the 1990s, when the campaign against public religiosity began to spiral out of control, both the federal government and more than 20 states passed Religious Freedom Restoration Acts to restore strict constitutional scrutiny for policies that restrict citizens’ exercise of religion. With those laws continually weakened and challenged in the courts, Trump’s executive order provides a new and effective remedy to the excesses of the secular left.

But it’s also a big win for everyone who cherishes the freedoms laid out in the U.S. Constitution because imposing any restrictions on those freedoms, whether in a broad or targeted fashion, endangers every right enjoyed by every American citizen. And the efforts to restrict religious liberty in public schools have clearly gotten out of hand, as Education Secretary Betsy DeVos recently pointed out.

Just last year, for instance, a Utah teacher made a 9-year-old Catholic student remove the ashes from his forehead on Ash Wednesday. In Kentucky, a school made a student take down a “prayer locker” she had set up so that classmates could submit anonymous prayer requests. In Washington, a high school football coach was suspended for praying — silently and by himself — after games.

None of these behaviors even came close to infringing on the rights of others, yet overzealous teachers and administrators punished them anyway. It’s the predictable result of a sustained campaign to drive religion from the public square, led by militant atheists who have spent decades convincing parents and teachers that any form of religious expression in any public place is a violation of the First Amendment’s guarantee of religious liberty.

As the president's executive order explains, that’s exactly the opposite of what the Founders intended. The First Amendment is very explicit about the government’s responsibility to respect individual rights, which is why it prohibits Congress from making laws that would restrict free expression, such as establishing a state religion. What the “freedom from religion” crowd wants, however, amounts to the establishment of atheism as America’s official religion, with all the restrictions on free expression that entails.

The president has dealt the radical atheist lobby a major setback, while at the same time taking a forceful stand on behalf of its victims — the school children who are punished, ostracized, and bullied for daring to express their faith.

The message sent by the executive order is unmistakable: the left’s war on religion will not be tolerated in the classroom, and our children have the right to live according to their beliefs no matter where they are.

Trump announced his decision at a White House event celebrating Religious Freedom Day, alongside leading religious figures from across the country. With Donald J. Trump in the Oval Office, people of faith can rest assured that their religious liberty is in safer hands than it has been for many years.

This administration’s efforts to safeguard religious freedom will be long-lasting, as well. In just three years, Trump has gotten more than 180 judges confirmed to the federal judiciary, and those judges will serve as a bulwark defending the First Amendment rights of all Americans for decades to come.

This country was founded by pilgrims who sought to escape religious persecution and that heritage is an essential aspect of our character as a nation. Thanks to President Trump’s efforts, we will be able to pass that heritage on to another generation.