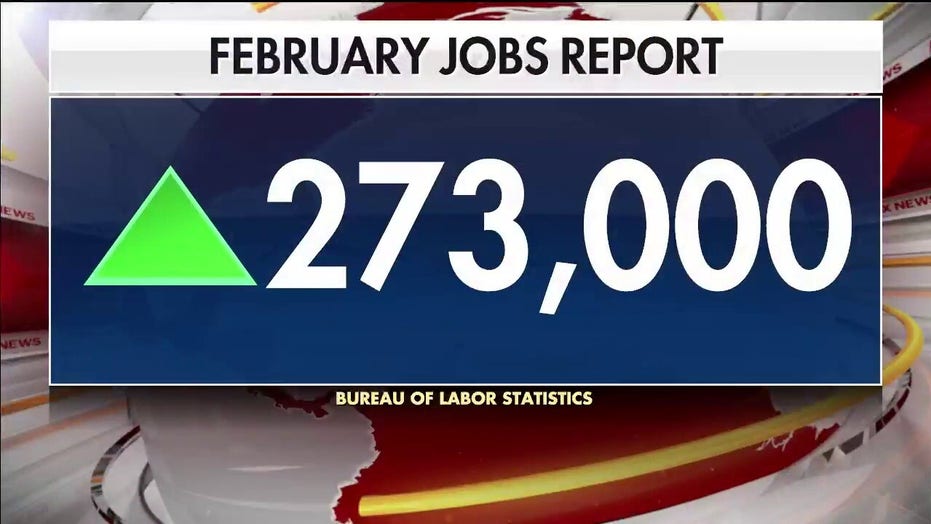 February jobs report blows by expectations, all eyes on March and the coronavirus effect

273,000 jobs were added in February; Stuart Varney reacts to the 'blockbuster' numbers and what to expect in March with the coronavirus.

While the coronavirus continues to pose a threat to the nation, it certainly didn’t put a damper on America’s strong and growing economy in February.

Thanks to that strong performance, the unemployment rate is now back down to a 50-year low of 3.5 percent. And the unemployment rate didn’t decline simply because people dropped out of the labor force, as was so generally the case during President Barack Obama's time in office. For the second month in a row, the labor participation rate clocked in at a steady 62.4 percent, a high last seen in 2013.

Along with upward revisions to employment data from the previous two months, which added a combined 87,000 jobs, the newest jobs report revealed that the economy created 360,000 previously unreported positions over the past three months.

Based on the new figures, the Trump economy has created an average of more than 243,000 jobs per month since December. That’s even higher than the monthly average for Donald Trump’s entire presidency, reflecting an economy that continues to gain steam no matter what external obstacles we encounter.

With all those jobs, the competition for workers also continued to drive wage growth. For the 19th consecutive month, average hourly earnings for all workers grew at a healthy 3 percent rate, faster than at any point during the anemic Obama-era “recovery” from the Great Recession.

Breaking out the numbers between workers and managers, workers benefited from the bulk of the increase, as has been the case throughout this blue-collar economic boom. While workers’ wages increased by 3.3 percent, managerial wages increased by only 1.8 percent.

In fact, things have been so good since the beginning of the year the Federal Reserve Bank of Atlanta’s GDPNow forecasting model is projecting 3.1 percent gross domestic product growth for the first quarter of 2020. You read that right. In the midst of the stock market’s gross overreaction to the coronavirus, GDPNow is forecasting 3.1 percent GDP growth with less than four weeks left in the quarter.

The bottom line is that the coronavirus has yet to put a serious dent in either the U.S. economy or the labor market.

Nonetheless, economists reminded us why theirs is often referred to as “the gloomy profession,” anticipating that the economy would only create 165,000 new jobs in February. Clearly, they allowed their assessments to be skewed by emotion, believing that the irrational panic of stock market investors is an accurate reflection of real-world economic conditions. It is not.

After three years under President Trump, we’ve gotten used to job creation – and just about every other economic metric – beating “expert” predictions, but last month’s disparity was particularly egregious. Any economists who let stock market volatility fuel pessimism about the underlying strength of the U.S. economy aren't worth their green eyeshades.

It’s not as though the jobs report failed to reflect the economic impact of coronavirus concerns — the outbreak began in late January, meaning job creation kept up a brisk pace in February throughout every shift in public perception and every sensational news headline about the spread of the virus.

The Trump administration can certainly take much of the credit for the fact that this widespread alarmism failed to materially affect the fundamentals of our economy in the same way it affected the stock market as its response to the outbreak has minimized the spread of coronavirus in America.

It’s obviously important to take the coronavirus threat seriously — especially since it has now taken several American lives — but it’s also important to contextualize our concerns and avoid succumbing to irrational fears.

As White House National Economic Council Director Larry Kudlow stated, while the coronavirus “is a human tragedy,” on “the business and the economic side, I don’t think it’s going to be an economic tragedy at all.”

If you find the recent stock market fluctuations disconcerting, just take a deep breath and read the latest jobs report.