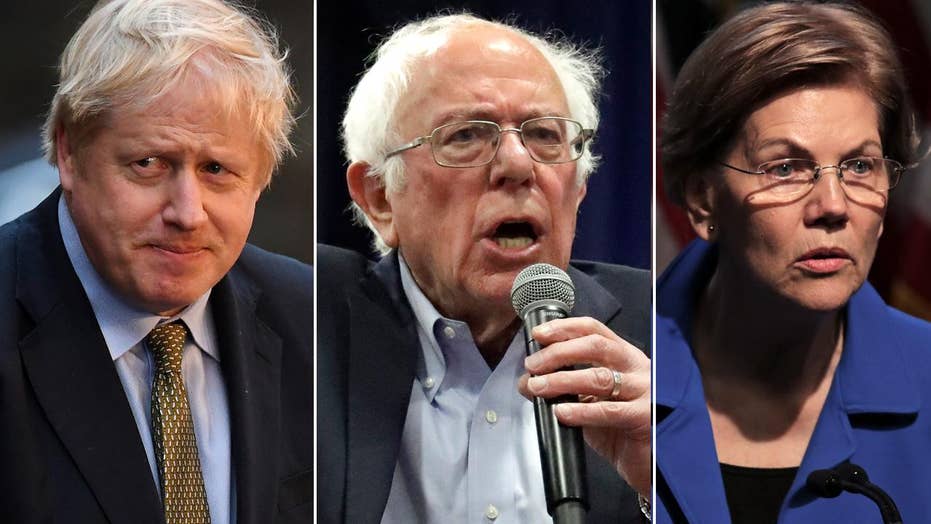 Boris Johnson’s landslide victory in the U.K. augurs well for President Trump’s prospects in 2020. The parallels are numerous and undeniable.

They also voted against anti-Semitism, hypocrisy and, for the record, the “establishment.”

JUSTIN HASKINS: SOCIALISTS IN US BEWARE – THE LESSONS FROM CONSERVATIVES' LANDSLIDE WIN IN BRITAIN

The choice could not have been starker. It is also likely to be quite similar to the decision that U.S. voters will face next year.

Even Joe Biden, not always the quickest out of the gate, got the message. The former vice president responded to the overwhelming defeat of Labour candidate Jeremy Corbyn by warning that if Democrats nominate an uber-progressive candidate to run in 2020, they could face a similar disaster. Of course, given Biden’s normally muddled delivery, that’s not exactly how he phrased it.

“Look what happens when the Labour Party moves so, so far to the left. It comes up with ideas that are not able to be contained within a rational basis quickly.”

Well, anyway, his message, if not his syntax, was crystal clear and meant to buttress Biden’s own supposedly moderate candidacy. He is correct that Corbyn endorsed an extreme Socialist platform, which apparently scared the bejesus out of the British people. Corbyn threatened to nationalize the country’s railroads as well as other sectors like mail, water and energy, and, in his words, run “them for the people – [bringing] real change.”

Corbyn, a perpetually angry septuagenarian, vowed to level the playing field by targeting the wealthy with huge tax increases and to bring big corporations to heel. He promised free internet to everyone, which he warned would invite “the implacable opposition of the private internet providers.” He also pledged that under his leadership the government would undertake the biggest public housing program in the country’s history.

As he rolled out his “manifesto,” Corbyn told voters: “You can trust us to do all this because we’re opposed by the vested interests for standing up for a different kind of society.” He added, “These policies are fully costed with no increases in VAT or income tax or National Insurance for anyone earning less than £80,000.”

As the Financial Times described it: Corbyn offered a “manifesto that effectively tells outside investors the U.K. is closed for business.”

As the Financial Times described it: Corbyn offered a “manifesto that effectively tells outside investors the U.K. is closed for business.”  Sound familiar? Of course, it does. Elizabeth Warren and Bernie Sanders, among others, are campaigning on very similar platforms.

Sound familiar? Of course, it does. Elizabeth Warren and Bernie Sanders, among others, are campaigning on very similar platforms. They too want to strip successful Americans of their wealth, they too want Big Government to play a much larger role in how our businesses work. They too, with varying degrees of precision, vow that middle-class Americans will not have to foot the bill for a lot of free new stuff.

It’s bunk, and voters know it. In the U.K., Corbyn dangled so many freebies before the public that the liberal (and disappointed) Financial Times described it as “less a set of strategic choices than a shopaholic out with someone else’s Amex.”

Meanwhile, Corbyn’s party stood by as anti-Semitism infused its ranks, just as Democrats have failed to reject similar leanings from some of its members. Numerous Jewish members quit Labour in protest, with one declaring the party “sickeningly institutionally racist.”

Corbyn also failed to live up to his and his party’s oft-expressed support for women, creating a shadow cabinet early on that excluded women from the top posts.

Of course, Brexit was the over-arching theme of the election just concluded. Boris Johnson vowed to get the deal done, while Corbyn, astonishingly, vacillated. He offered voters no clear choice on the main issue of the day.

For those who have lost track, the English, in a shocking rejection of establishment elites, voted to exit the EU three years ago. Nothing happened.

People who voted for Brexit were understandably frustrated and angry, while many “remainers” grew impatient with the dithering and wanted a resolution.

Elites like to paint Brexit voters as racist or xenophobic, saying that British workers want to stem the influx of foreign workers. Certainly, fear of wage competition and overburdened public services played a role.

But, many English people were simply fed up with having faceless EU bureaucrats run their lives. I wrote a piece for the Fiscal Times predicting the upset vote in 2016, based on British fury that their favorite (and ubiquitous) electric tea kettles had been outlawed by Brussels.

A pro-Brexit report the year before the vote showed that 158 laws impacting British lives passed in 2013 were written by “EU meddlers.” The list represented micro-managing from afar of food labeling, ferret imports, cross border health care, safety at sea, packaging and a million other everyday activities. Some of the directives were just plain bizarre, such as a rule allowing the eating of horse meat but forbidding eating one’s pet horse.

Are there issues that might dominate our election in a similar fashion? Yes: Trump’s promises to Build the Wall and to level the playing field with our trading partners. Just as many British working-class voters saw Brexit as a defense of their jobs and national interests, so do many blue-collar workers in the U.S. see enforcing our borders and demanding fair trade practices as important to their long-term prospects.

As with Brexit, the liberal media condemns wanting to protect our borders, saying initiatives aimed at limiting illegal immigration are racist. But those writers have not faced stepped-up competition for low-wage jobs from immigrants; they have not felt the effects of our lax border control.

Similarly, elites condemn Trump’s trade battles as “protectionism.” But pundits and politicians have not seen their manufacturing jobs exported by policy-makers who ask for their votes while simultaneously backing trade pacts that put our workers at a disadvantage.

Democrats should be alarmed by the U.K. election results; common sense Americans will sympathize.