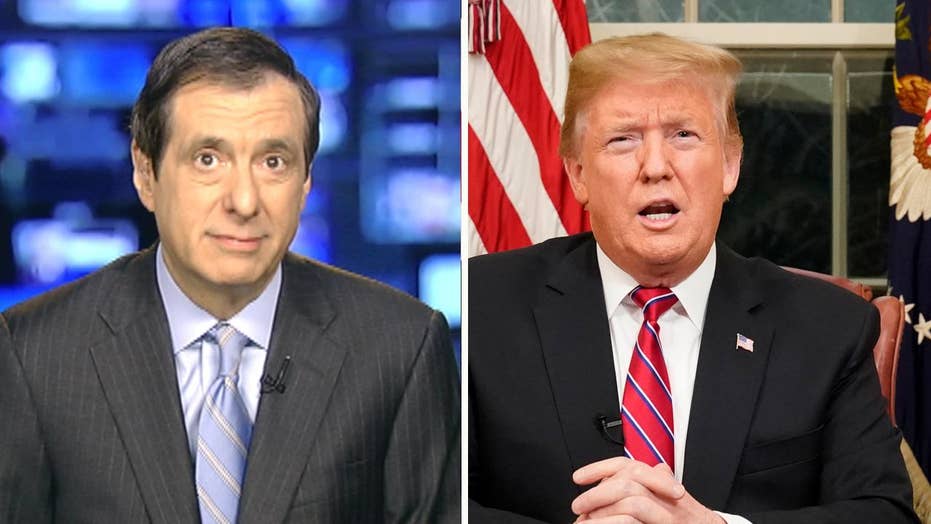 Howard Kurtz: Why prime-time extravaganzas are past their prime

'MediaBuzz' host Howard Kurtz weighs in on the media winners and losers after President Trump's first Oval Office address and the response by Chuck Schumer and Nancy Pelosi.

This was the week Pennsylvania Avenue became Wall Street. President Trump made his televised case to protect America’s southern border with a wall or other physical barrier and many journalists did everything they could to attack the plan short of vowing to tear down anything that is built.

HuffPost called the speech “PRIMETIME POISON.” Most of the media agreed. Many journalists opposed broadcasting the presidential speech – Trump’s first prime time Oval Office address – saying it was “inflammatory” or “propaganda” even before it was delivered.

Then journalists fact-checked the Trump speech in ways they never use on Democrats – even seeming to fact-check whether Trump has a “heart and soul.” Or simply questioning Vice President Mike Pence’s “lack of spine and soul.”

This, despite the most pathetic Democratic speech response in TV history. The tag team response delivered by Senate Minority Leader Chuck Schumer of New York and House Speaker Nancy Pelosi of California went viral in the worst way. Viewers compared their stony looks to the painting “American Gothic” and the image of them standing behind a solo podium became an instant meme.

That didn’t stop many in the media from trying to take down another brick from the wall. They attacked Trump’s description of the situation at the border as a “crisis” even before the speech.

The Washington Post declared: “By any available measure, there is no new crisis at the border.” Apparently, having millions of illegal immigrants in the U.S. is fine with the Post. As are the crimes that come along with that number.

Nevertheless, MSNBC agreed that calling illegal immigration a crisis was a “scam.” Anchor Chris Hayes admitted that “horrible” crimes do happen, adding “but to conflate them with the 12 million people living here is a kind of incitement that’s pretty ugly.” Sister network NBC said the real crisis was “the crisis of dysfunction here in Washington.”

Both The Washington Post and The New York Times determined that there was no crisis at the border by interviewing a few people who lived nearby. But San Diego’s KUSI-TV showed how that type of reporting could be skewed. KUSI criticized CNN, saying the network had reached out for an interview about the border situation and then rejected the station because of its reporting. CNN, the station claimed, “didn’t like what they heard from us.”

In a statement to Fox News a CNN spokesperson dismissed the incident, saying: "That happens many times every single day. … We did, however, book a reporter from KUSI for a story on immigration and the border wall on CNN in November. This is a non-story."

This all happened the same week that The Times had to apologize for using an anti-Hispanic term in its famous crossword puzzle.

2. Presidential Silence Is Golden: Even before President Trump spoke to the nation, many in the media urged the TV networks and stations not to broadcast the speech. The effort failed – this time.

Vanity Fair went all “Minority Report” and convicted the president before his speech was aired. It questioned why the networks would run “Trump’s Surely Inflammatory Immigration Speech.” CNN Anchor Don Lemon was conflicted, questioning why networks should “expose the viewer and the American people to propaganda.”

Even The Washington Post, that bastion of the free press that Hollywood makes movies about, argued against broadcasting the speech. Media critic Erik Wemple suggested that if Trump “really does make news during this address, let him do so either on cable news or on a livestream somewhere.” Then the networks could “organize panel discussions and tally the lies.”

Post media columnist Margaret Sullivan agreed after the speech, urging “broadcast television executives” to learn from their mistakes. “It’s a simple two-letter word. Let’s say it together: No,” she wrote.

3. That’s a Fact, Jack?: Journalists have abused the term fact-checking more than any supposed truth device in an attempt to attack Trump and his supporters. This time, the media decided Trump had lied before he ever spoke.

Post columnist Karen Tumulty‏ declared: “Journalists are going to fact-check every word of Trump's nationally televised speech. And it won't mean a thing to his supporters.”

There were good reasons why. The checks themselves were often ridiculous or wrong. PolitiFact, which has done a lot to damage the idea of fact checks, tried to pretend Trump was wrong … even when he was right.

Trump made a clear charge, saying that “Sen. Chuck Schumer, who you will be hearing from later tonight, has repeatedly supported a physical barrier in the past along with many other Democrats.” Here’s a nice Post roundup of Barack Obama, Hillary Clinton and others proving it.

That didn’t stop PolitiFact. The organization ruled the 100 percent true statement was “Mostly False.” Why? “The physical barrier Schumer has supported is different from the wall Trump has talked about.”

The news industry didn’t even like neutral fact checks.

The Associated Press dared note that Democrats could also end the shutdown. The AP was reviled for this. Here’s the AP’s neutral “fact check”: “Democrats put the blame for the shutdown on Trump. But it takes two to tango. Trump's demand for $5.7 billion for his border wall is one reason for the budget impasse. The Democrats refusal to approve the money is another.”

The tweet generated 24,000 replies and was resoundingly mocked by the media and left. The Post reported that, “AP walks back tweet that blamed both sides for government shutdown.”

Vox Senior Correspondent and Co-founder Matthew Yglesias‏ tweeted his own response. “Fact check: FDR blames the Empire of Japan for the attack on Pearl Harbor, but it takes two to tango.” Others tried “Star Wars” or “Die Hard” jokes or accused AP of the dreaded sin of  “both-sides-ism.”

4. Bad Week for Jim Acosta: The only question for CNN Chief White House Correspondent Jim Acosta this week was who embarrassed him more – the president or White House counselor Kellyanne Conway.

Conway bombarded Acosta with 57 seconds of humiliation that included telling him a lot of his fellow journalists “don’t like you” and singling him out for the “disrespect that you showed to me personally.”

Trump mocked a bizarre video of Acosta showing that the border wall works and retweeted it with the simple comment: "Dear Diary."