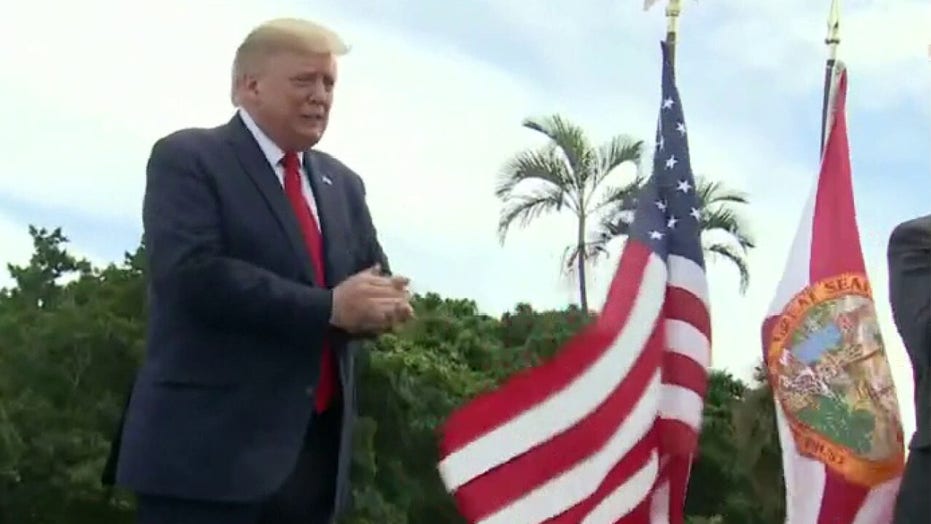 As we enter the final weeks of the presidential campaign, our politics are getting uglier, and the attacks on President Trump even more unhinged. That’s saying something.

Gov. Gavin Newsom blames Trump for the wildfires burning out of control in the West and, unimaginably, Joe Biden’s newest ad campaign says the president is responsible for the riots that have savaged our Democrat-led cities.

DAVID LIMBAUGH: TRUMP WILL WIN IN NOVEMBER – HERE'S WHY I BELIEVE THAT BOLD STATEMENT

Piling on Trump has gained steam as Democrats, stuck with a weak candidate and divided on policy, have made this election all about demonizing the president. Unfounded accusations of disparaging our military, “whistleblower” complaints from disaffected bureaucrats, tell-all books aimed at undercutting the president – anything goes.

But here’s bad news for Democrats: in the battleground states that will decide this election, according to Real Clear Politics, Joe Biden is ahead by only 3.5 points on average – near the margin of error.

Trump is narrowing Biden’s lead even as the liberal media works overtime to expunge Joe Biden’s long history of lying and plagiarizing that in a more honest era booted him from a prior presidential contest. The press also downplays Tara Reade’s accusation that Biden assaulted her, the candidate’s obvious fragility, and his policy flip-flops.

To the New York Times and CNN, Biden is an exemplary candidate, even though they know better. After all, the former vice president has consistently refused to be interviewed by the Left’s premiere newspaper; that is a stunner, which appears to have worried Grey Lady scribes not one whit.

And now social media has climbed aboard, adding the heft of Facebook, Google and Twitter to the campaign to elect Joe Biden.

And yet, remarkably, according to a recent Harvard-Harris poll, some 47% of the nation still approves of President Trump’s job performance.

How can that be? The answer is, in part, that Democrats, as always, have overplayed their hand. The ceaseless hair-on-fire accusations from Pelosi and Rep. Adam Schiff, D-Calif., and MSNBC’s Rachel Maddow over the past four years have lost their teeth, especially since so many proved false.

Also, voters see Democrats quite obviously willing to hurt the country – hurt their voters – just to score political points. As Biden’s running mate Kamala Harris and Pelosi cast doubts on the safety of a COVID-19 vaccine, worried a cure might boost Trump’s prospects, they may deter vulnerable people from taking the promised cure. That could cost thousands of lives.

In addition, Democrats just prevented passage of a $300 billion COVID relief measure offered up by Senate Republicans that would have directed $105 billion to our schools, $20 billion to farmers, $47 billion for vaccines and billions to small businesses and the unemployed.

While Trump has been putting America first, the Left has been burning down our cities, tearing down our monuments, rewriting our history and defaming our heroes, while silencing all who oppose them.

Democrats claimed it was not enough, but for those struggling to survive, $300 billion is better than nothing.

Similarly, earlier this year, Democrats refused to sign onto a police reform bill crafted by Republican Sen. Tim Scott. They didn’t want to lose control of this wedge issue. Consequently, no bill was passed.

Trump supporters are infuriated by the endless obstruction from Democrats, and impressed that notwithstanding their ongoing efforts to derail this president, he has accomplished a great deal.

Those who back him support:

This baker’s dozen of achievements is remarkable, and incomplete. The president has also wrested billions to rebuild our depleted military, improved the medical care of our veterans and created the Space Force.

While Trump has been putting America first, the Left has been burning down our cities, tearing down our monuments, rewriting our history and defaming our heroes, while silencing all who oppose them.

Democrats – and Joe Biden – have been complicit in these affronts to our nation and our pride; their months of silence have encouraged blue cities and states to tolerate these outrages. Americans across the political spectrum are offended, and alarmed. People of color have borne the brunt of the destruction, as violence wracks minority neighborhoods and minority-owned businesses.

If Donald Trump is reelected in November, there is every chance Democrats will try to challenge the legitimacy of his win. When an embittered Hillary Clinton advises Joe Biden to never concede, she is calling for chaos, and that’s what we may see.

Trump supporters have been harassed into silence; we don’t know how many there are, but we do know they will be heard on Nov. 3.