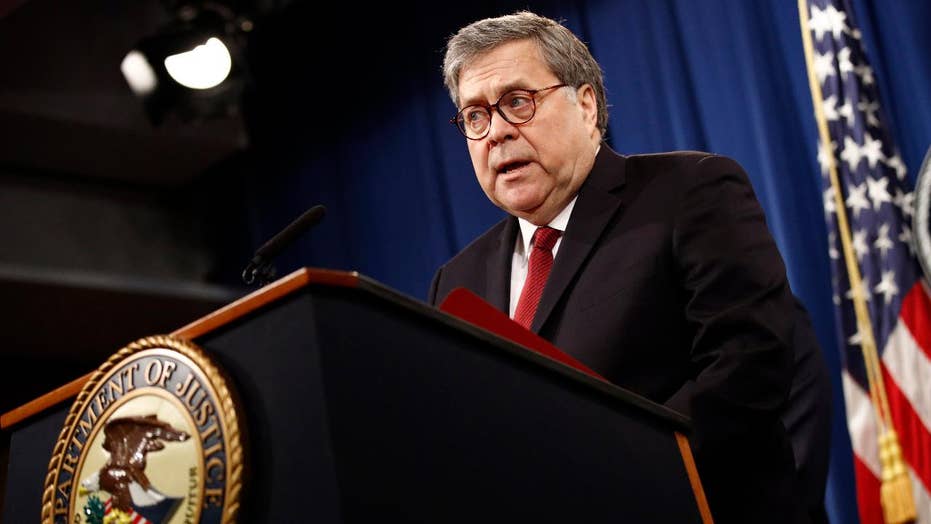 Attorney General William Barr on the findings of the Mueller report.

The release Thursday of the redacted report of Special Counsel Robert Mueller’s probe of Russia’s interference in our 2016 presidential election should mark the end of a long, expensive and pointless investigation. It was an investigation that damaged the American legal system in ways that should not be forgotten.

But don’t expect the Mueller report to fade into history in coming days. Democrats who control the House of Representatives are already demanding to see the entire report without any redactions.

The Democrats also want to see President Trump’s tax returns for the past six years, an enormous amount of other information about the president’s long and successful business career going back decades, and information about his activities and communications with aides in the White House.

Instead of wanting to legislate and serve the American people, the Democrats are determined to investigate, investigate and investigate some more to serve their own political needs. They are desperate to find something – anything – to deny the president a second term in office.

We’ve already learned from Attorney General William Barr that after nearly two years of investigation Mueller concluded there was no collusion between Trump and his presidential campaign and Russia to win the 2016 presidential election.

And we’ve learned that Barr and Deputy Attorney General Rod Rosenstein concluded from the Mueller report that the president didn’t obstruct justice.

Space doesn’t permit me to list everything Mueller did wrong. But let’s look at the Top Four most improper actions by the special counsel.

Mueller never should have taken the job as special counsel.

Mueller, who served for 12 years as FBI director, knew when he took the job of special counsel that his friend and former FBI colleague James Comey – who replaced him as director of the bureau in 2013 – was at the center of the activities related to the Russia investigation. That meant Mueller would have to judge the actions of his friend and longtime associate, along with other FBI officials Mueller who had worked with.

Mueller was interviewed by President Trump for the job of FBI director one day before he took the special counsel position. That made Mueller a witness to any potential obstruction of justice charge, because Trump spoke to him about replacing Comey.

In America, you should not – or rather, cannot – be both a witness and a fact-finder.

Mueller’s decision to take the special counsel position under those circumstances must cast doubt in the mind of any fair-minded person about whether he was taking the position for partisan reasons and whether he wanted to protect Comey and his other friends.

When Mueller became special counsel, he knew divided Americans were and would be throughout his investigation.

The law says that Mueller was not allowed to consider the political affiliation of the prosecutors he hired to help him. Yet he somehow wound up with a raft full of Democrats and Hillary Clinton donors. We were supposed to believe it was sheer coincidence.

Mueller should have avoided all of that by going outside Washington to find his team. He didn’t. The hiring of biased attorneys compromised his efforts from Day One.

Yet Mueller claims he couldn’t find any unsavory evidence related to the manner in which the Russia investigation was launched by his friend Comey and the FBI. Really?

After all, Comey admitted on TV that he leaked documentation that he took (read: stole) from the FBI. That remains a crime that is in plain sight – but Mueller couldn’t find it.

Beyond that, there is no doubt Mueller reviewed the investigators’ “sources and methods” and their lack of evidence of Russia collusion. While Mueller was concluding there was no evidence of collusion, the FBI abuses of the Foreign Surveillance Intelligence Act had to be in plain sight as well.

So why didn’t Mueller make any referrals related of alleged misconduct by Comey and others in the FBI?  The answer is because he was investigating the work of his own friends and work associates. This is why he never should have taken the job of special counsel.

George Washington once wrote that “I had rather be on my farm than be emperor of the world.”  Washington’s rival, King George of England proclaimed that Washington would be “the greatest man in the world” if Washington surrendered his power as head of a conquering army at the end of the Revolutionary War in favor of representative government for our new nation.

Great power, Washington believed, was often found when not exercising power. Mueller would have done well to understand that.

Instead, Mueller chose to abuse power. Using a SWAT team to arrest Trump associate Roger Stone long after Mueller surely knew there was no Russia collusion is almost as far from the principles of George Washington as possible.

Stone wasn’t the only one to be crushed under the weight of Mueller’s abuse.

Former National Security Adviser and retired Army Lt. Gen. Mike Flynn, among others, knows of it too.

The use of the full weight of our government to intimidate and entrap Americans should never be forgotten. Nor should any of the other actions of Robert Mueller.