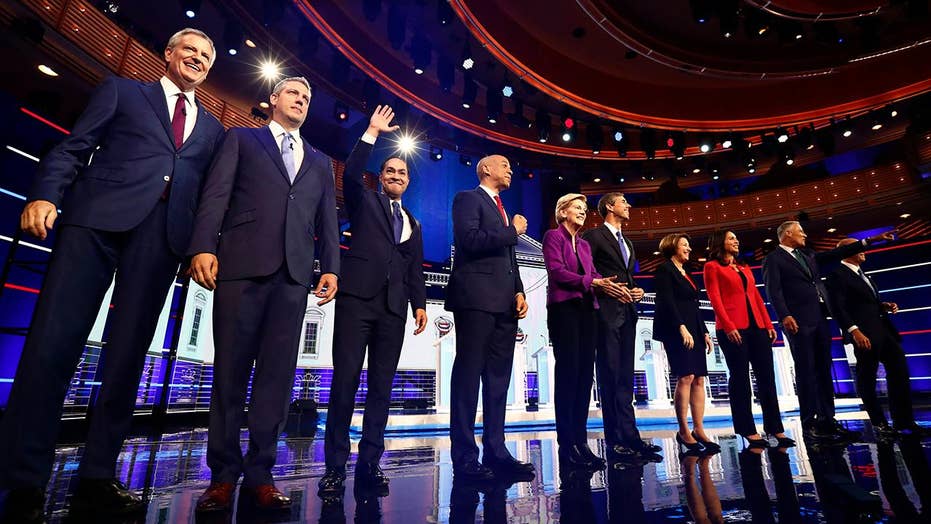 Both Democrat debates are in the books. We can argue over who won and who lost, who helped themselves and who didn’t. More importantly, however, the debates cemented that 2020 will be the most divisive election in over a century and will be the very height of our Divided Era.

Make no mistake, however, as I spoke about before the debate, this debate was about three people: former Vice President Joe Biden, Sen. Bernie Sanders and Sen. Kamala Harris. Would Biden make a major gaffe? Would Sanders hold his own and would Harris rescue her sinking campaign?

Biden didn’t make the major gaffe and Sanders' supporters are still with him.

As for Harris, however, she turned the debate in her favor with her line about the other feuding Democrats: "America does not want to witness a food fight. They want to know how we are going to put food on their table." She also went for a viral moment and likely got it. She landed punches on Biden and his defense left questions. Harris certainly got the attention she wanted.

At the end of the day, however, after two nights of debate, it is unlikely that the polling order will change much over time. Biden and Sanders will still be there. Warren has done well and perhaps Harris and Gillibrand get into the vice-presidential discussion along with the Mid-Westerner Klobuchar.

How the individual candidates performed, however, is not the defining outcome of those debates – not by a long shot. Those debates cast in stone the almost radical differences the voters will choose between in 2020.

Those Democrats practically did the “wave” you see at sports stadiums when asked, raise your hand, if . . .

1. You are for free health care for those here illegally.

2. You want universal health care/single payer/"Medicare-for-all" – Maybe not today, maybe not tomorrow, but someday soon and for the rest of your lives.

3. Crossing the border illegally should be decriminalized – in favor of getting a ticket, it would seem.

4. Free education now and retroactively in the form of trillions in debt relief.

5. Federally funded abortion – up to and after birth it would seem.

6. Repeal of the Trump tax cuts; and

Those are not minor issues.

They are not one or two issues – they represent the most major issues any electorate has faced in one election in the television era.

They also represent the most government-centric positions taken by a party since the radical departure of New Deal from the decade before FDR. They also would represent the largest percentage increase in government spending since the New Deal. Elizbeth Warren’s programs alone would more than triple the federal budget – the national debt be damned.

After two debates, they are on record now and there is no middle ground on those issues compared to the Trump presidency.

The Trump presidency is arguably the most conservative/limited government presidency since Coolidge. Trump and the voting Republicans are diametrically opposed to all those positions. All of which means that the 2020 choice will be incredibly stark.

Billions will be spent convincing each other that one side is right and the other side is surely wrong. That is what a competition over ever-larger government does. It picks winners and losers on an ever-grander scale and leaves a nation ever more divided. In 2020, that division will reach new heights and then set the stage for more battles to come.