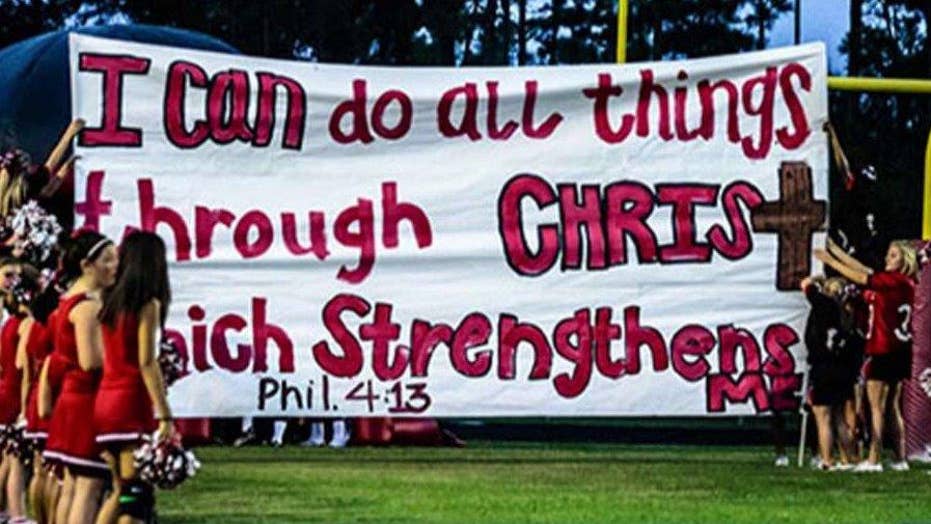 The Texas Supreme Court on Friday refused to hear the school district’s appeal of a case involving Bible verses written by cheerleaders on run-through banners displayed at Kountze High School football games. The action by the state’s highest court all but ends a more than five-year legal battle that garnered support from Texas’ two Republican U.S. senators, Ted Cruz and John Cornyn.

First Liberty Institute, one of the nation’s most prominent religious liberty law firms, took on the case back in 2012 along with co-counsel David Starnes (no relation) and the law firm of Gibson, Dunn and Crutcher.

“As the football season kicks off across Texas, it’s good to be reminded that these cheerleaders have a right to religious speech on their run-through banners – banners on which the cheerleaders painted messages they chose, with paint they paid for, on paper they purchased,” Sasser told me.

“Stop harassing cheerleaders and accept that they are free to have religious speech on their run-through banners,” Sasser warned.

In 2012 seven cheerleaders sued the school district after they were banned from using Bible verses on banners that players would run through at high school football games. The verses, like “I can do all things through Christ who strengthens me,” were meant to be inspirational and encouraging.

The state’s Ninth Court of Appeals ruled in favor of the cheerleaders in January – declaring the signs are “pure private speech.”

“We find the cheerleaders’ speech on the pregame banners cannot be characterized as government speech,” the court wrote.

However, the school district argued that a cheerleader who cheers at a game engages in government speech, and therefore cannot write religious messages on banners.

The school district had no immediate comment on the Supreme Court ruling.

“This is a total victory that protects the religious liberty of students everywhere,” attorney Allyson Ho, the lead appellate counsel, said. “This decision by the Supreme Court of Texas should be the final word on this issue for students and schools across Texas.”

One question remains unanswered. Why did the school district spend thousands of dollars in taxpayer money to try and stop the cheerleaders from exercising their constitutional rights? Perhaps the citizens of Kountze might get an answer when school board members face re-election.

I reckon the Kountze cheerleaders have learned a very important lesson about perseverance over the past five years. You really can do all things through Christ who strengthens you.