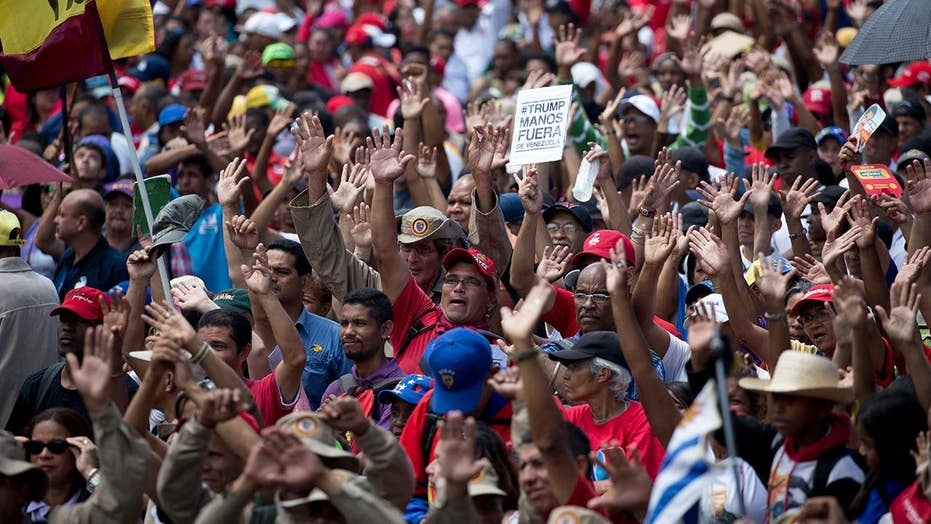 Q: What did socialists use before candles?

It’s an old joke, sure. But it’s no laughing matter. Just ask the people of Venezuela.

The socialist regime there nationalized the electricity sector a dozen years ago. Today, blackouts in the once-prosperous Latin American nation have become routine. Electricity isn’t all that’s in short supply. Gasoline is scarce in the oil-rich nation, as are food and medicine.

Meanwhile, the regime concentrates on violently repressing protests and burning humanitarian aid as it approaches its borders.

MARK PENN: SOCIALISM IS A RISING DANGER IN DEMOCRATIC PARTY

After 20 years of socialism, Venezuela is a failed state.

And that should surprise no one. Socialism is a rigid ideology that always ends in tyranny.

The prime example is the Soviet Union. Lenin and Stalin’s iron rule brought death to 20-25 million victims. “Enemies of the state” were executed by firing squads, sent to forced labor camps in the Gulag, perished in country-wide forced famines, experimented on in “psychiatric” hospitals, and summarily deported from their homes to the distant steppes of Russia.

No less totalitarian in their practices were the Castro brothers, who promised freedom and democracy when they came to power in Cuba. Six decades later, the Cuban people are still waiting for the first free election.

Rather than empower the common man, socialists believe in empowering bureaucracy. In their minds, bureaucrats will always make decisions based on science and dispassionate reason – and make sure those decisions are implemented and enforced efficiently.

Upon gaining independence, India trod a socialist path for 40 years. It led to a never-ending cycle of poverty and economic deterioration. Finally, Indian leaders began looking to Adam Smith rather than Karl Marx to guide their economy. Today, it boasts the largest middle class in the free world.

Socialism has little regard for the middle class. It’s all about securing and maintaining power for the ruling class.

Consider the People’s Republic of China. Mired in Maoist revolutionary rhetoric, it was one of the world’s poorest countries for its first three decades. Then, Deng Xiaoping introduced “socialism with Chinese characteristics.”

The Communist Party does not allow a free press or free speech, competitive elections, an independent judiciary, free travel or a representative parliament. Instead, President Xi Jinping has instituted a cult of personality that rivals the one-time worship of the so-called Great Helmsman, Mao Zedung.

Nicaragua’s Marxist leader Daniel Ortega is another example of the lust for power and control that characterizes socialism. His under-reported reign of terror has resulted in the deaths of more than 300 dissidents in just the last few years.

All of these horrors are inevitable because socialism is built on a fatal conceit.

Modern socialists believe that the world has become so complicated, so complex, so globalized, that regular citizens just can’t manage things. We, and only we (say the socialists) are equipped to run things. Hence, for example, it’s imperative to nationalize health care, since “the little people” can’t be trusted to make intelligent, informed decisions about their health care.

Rather than empower the common man, socialists believe in empowering bureaucracy. In their minds, bureaucrats will always make decisions based on science and dispassionate reason – and make sure those decisions are implemented and enforced efficiently.

It’s an elitist, intellectually arrogant belief, and it’s dangerous. As Ronald Reagan noted in a long-ago campaign speech for Barry Goldwater: “Either we accept the responsibility for our own destiny, or we abandon the American Revolution and confess that an intellectual [elite] in a far-distant capitol can plan our lives for us better than we can plan them ourselves.”

In “The Road to Serfdom,” the Nobel Laureate F. A. Hayek dismissed the utopian dream of “democratic socialism” as “unachievable.” Why? Because it is based on the fatal conceit that a galaxy of bureaucrats can collect, analyze and direct the individual actions of 300 million Americans.

“America will never be a socialist country!” So President Trump declared last month in his rousing State of the Union speech. That should be the fervent prayer of all Americans who prize liberty and wish to live our lives our way.