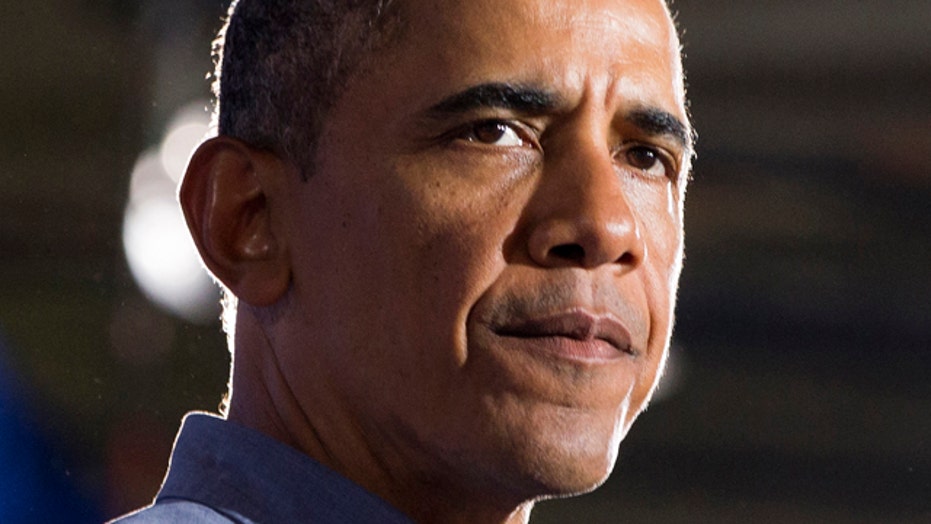 Will Obama get congressional authorization for Syria strike?

The Hill's A.B. Stoddard weighs in

During his second term in the Oval Office, President Obama has become increasingly risk averse. Yet, he seems poised to embark on one his riskiest foreign ventures yet:  directly intervening in the Syrian civil war with U.S. military force.

We’ve seen this unfold before: presidents who try to duck the responsibility of leadership often wind up finding themselves led by events and forced to respond, flailingly, under awkward circumstances.

Jimmy Carter experienced this problem.  Having been pushed around the world stage, he struggled for ways not to look weak.

Attempt #1: The U.S. boycott of the Russian Olympics after the Soviet invasion of Afghanistan.  It proved an inept way to regain international credibility.

There followed Attempt #2:  the failed military effort to rescue hostages taken at the U.S. embassy in Tehran.

President Obama has suffered his own string of foreign policy set backs—from Moscow to Beijing to, most dramatically, the deadly disaster at Benghazi. Leery of piling up more foreign failures, the White House has grown increasingly loath to make any key decisions that carry risk. Hence we’ve seen much dithering over the future size of U.S. forces in Afghanistan, much to-ing and fro-ing over how to handle Egypt.

And now comes Syria—a mega-problem that the White House has spent months trying to do nothing about.  Having failed to lead, Mr. Obama finds himself backed into a Carter-esque corner, apparently ready to give in to calls to jump into Syria.

Will the widely anticipated attack arise from the Administration’s moral outrage over Assad’s use of chemical weapons last week?  That’s highly doubtful.

Earlier use of chemical weapons there—confirmed by U.S. analysis—sparked no response harsher than a verbal reprimand.  For a conflict that has already claimed more than 100,000 Syrian lives and displaced over a half-million more, the moral outrage from Washington comes a little late.

Nor is the prospective attack intended to produce regime change, according to White House spokesman Jay Carney.

Rather, the Oval Office seems to be interested mainly in putting on a show of force—and  just enough military force to assuage the critics of inaction.

“Punishing” Assad in this fashion is unlikely to have any practical effect on the course of the civil war or in terms of inhibiting the future use of WMD anywhere in the world. And that makes the projected foray a classic example of a risky military venture:  It won’t solve any real problems, and there’s no telling where it might lead.

Indeed, the lesson any self-respecting totalitarian regime will likely take away from the “punishment” heaped on Assad is that what they really need is nuclear weapons.

When you have nukes, like North Korea, nobody says “Let’s just lob a few cruise missiles at them to show them who’s boss.” Indeed, one perverse outcome of this incident may be to actually increase the potential for nuclear proliferation among the world’s bad actors.

If President Obama truly believes an attack on Syria is both right and efficacious, he ought to confer with Congress, then rather than rush to hit the “launch” button.  It is always wise for the commander-in-chief to consult with the Congress, and there is certainly time for that in this instance.

Rushing to fight before the Congress comes back to town is a tip-off that the administration may not have all the answers it should.  Rather, it looks like the president would rather let ‘er rip over the weekend, hope it all turns out okay and count on Congress not to raise a big stink about it if things don’t turn out too bad.

Unfortunately, hope is not a good strategy.  When it comes to the use of military force, risky business is bad business.