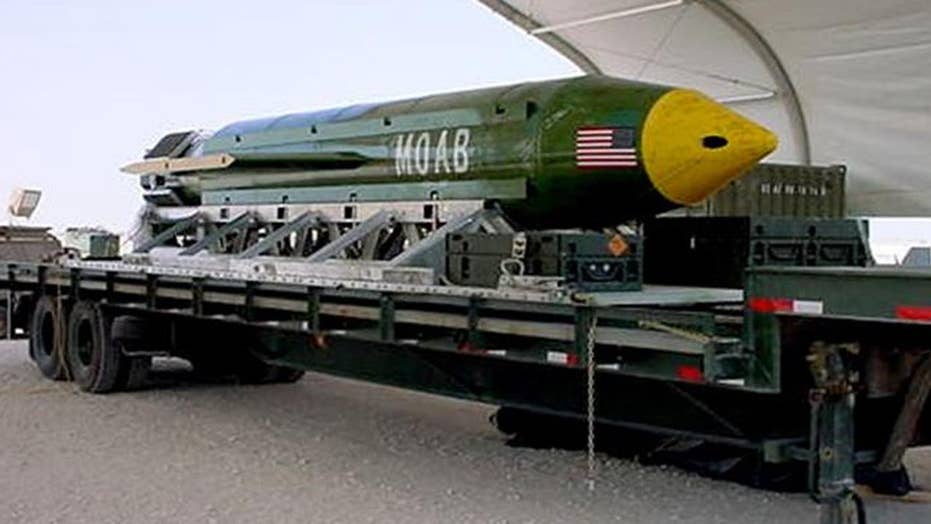 MOAB used for the first time in combat

Jennifer Griffin reports on the U.S. decision to drop the largest non-nuclear bomb on Afghanistan

On April 13, at 7:32 pm local time, U.S. Forces in Afghanistan struck an ISIS tunnel complex in Nangahar Province.  What made this strike more newsworthy than most was its use of a GBU-43 bomb.

The Massive Ordnance Air Burst Bomb (MOAB), known more colloquially as the “mother of all bombs” is the most powerful conventional bomb in the U.S. arsenal.

The commander of U.S. forces in Afghanistan, General John Nicholson noted that “this is the right munition to reduce these obstacles and maintain the momentum of our offensive against ISIS-K” (the Afghan branch of ISIS).

The MOAB was developed in 2002, but had never been used in combat. Thus, the strike in Nangahar Province will inevitably spark speculation about what it all means.  Does this represent an escalation of the Afghan war effort? Is it another, extremely loud signal of seriousness from the Trump administration? Was it a response to the death of Staff Sergeant Mark De Alencar, a Special Forces soldier who was killed April 8 in the same province?

Most likely the MOAB was used for a simple reason: it was the right bomb for the right target.

Most likely, however, the MOAB was used for a far simpler reason: it was the right bomb for the right target.

Despite some reports to the contrary, the destructive force of the MOAB is nowhere near that of a nuclear weapon.  The MOAB has the force of 11 tons of TNT. For comparison, the bomb dropped on Hiroshima in 1945 had the force of 15 thousand tons of TNT.

The MOAB is designed to destroy surface targets in a contained environment such as a valley or a cave system.  It does not have the capability to penetrate deeply into terrain and destroy a deeply buried target.  It is, however, imminently well-suited to collapsing cave openings and killing combatants within the local area.

Now, consider Thursday’s target. Nangahar Province is a deeply mountainous area, making normal military operations difficult.  In 2001, Usama bin Laden was believed to have taken refuge in caves in the Tora Bora region of the province. Back then, the U.S. used large BLU-82 15,000 lb. bombs, known as “daisy cutters” in an attempt to seal and deny the use of caves to bin Laden and his followers.   The MOAB was not available then.

The MOAB contains a few thousand pounds more explosive than the BLU-82 daisy cutter. It also incorporates improvements in delivery, making it more precise than the daisy cutter.

Given the difficulty of military movement in the province, the MOAB is an excellent choice for reducing enemy infrastructure and forces in the area.  For those reasons, the use of the MOAB probably represents neither an escalation nor a change in strategy or tactics by the Trump administration. It’s just the appropriate matching of ordnance to target.

Some will try to link the use of the MOAB to the death of Staff Sergeant De Alencar. That link does not align with U.S. past operational methods. U.S. forces do not operate on principles of retaliation or response. Rather, they apply military force to achieve specific outcomes based on the theater strategy.  In this case, U.S. forces in Afghanistan have set the goal to destroy ISIS-K in Afghanistan.

Standing rules of engagement govern how U.S. forces employ deadly force to achieve effects and minimize civilian casualties. Even though the bomb was bigger than normal, the commanders involved in this operation are bound by those same rules. As Gen. Nicholson emphasized: “U.S. Forces took every precaution to avoid civilian casualties.”

It’s reassuring to note that Gen. Nicholson and the U.S. forces in Afghanistan appear to have been given the liberty to prosecute the war in the manner they think most effective, while at the same time, adhering to the standing rules of engagement.