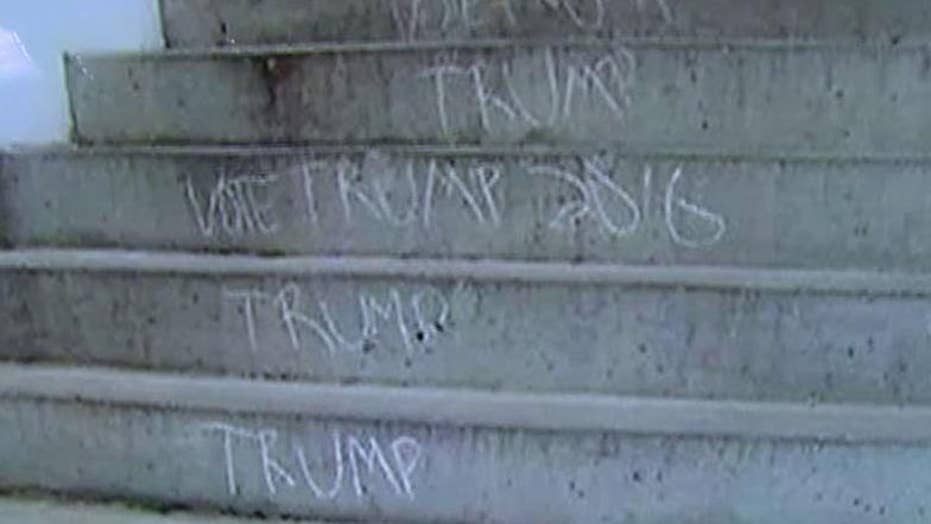 'Trump 2016' chalk markings cause a stir at Emory University; Reaction on 'Outnumbered'

This is a Fox News Alert.

Emory University in Atlanta is under siege at this hour from a chalk-wielding Donald Trump supporter who caused a massive outbreak of micro-aggressions among frightened students.

Terrified collegians are hunkered down in their safe spaces – traumatized by whoever wrote “Trump 2016” and “Accept the Inevitable: Trump 2016” on campus sidewalks.

“That was a bit alarming,” one panicked student told The Emory Wheel. “What exactly is inevitable? Why does it have to be accepted?”

Another student whimpered that she did not feel safe.

“I’m supposed to feel comfortable and safe [here],” she told the campus paper. “But this man is being supported by students on our campus and our administration shows that they, by their silence, support it as well…I don’t deserve to feel afraid at my school.”

The Emory Latino Student Organization posted a Facebook message calling the drawing “an act of cowardice.”

“They did not do this merely to support the presidential candidate, but to promote the hate and discrimination that goes along with him,” they wrote.

Dozens of students protested the chalk drawings in the university’s quad – demanding the administration take action against the pro-Trump supporter.

“You are not listening! Come speak to us, we are in pain,” students shouted as reported by the campus newspaper. “It is our duty to fight for our freedom. It is our duty to win. We must love each other and support each other. We have nothing to lose but our chains.”

I’m not a clinical psychologist, but those kids are freaking nuts, folks.

Emory University President Jim Wagner later met with the protestors and acknowledged in an email that they had voice “genuine concern and pain in the face of this perceived intimidation.”

“I cannot dismiss their expression of feelings and concern as motivated only by political preference or over-sensitivity,” he wrote in an email to students. “Instead, the students with whom I spoke heard a message, not about political process or candidate choice, but instead about values regarding diversity and respect that clash with Emory’s own.”

President Wagner vowed to launch an investigation and round up the pro-Trump graffiti artists, the newspaper reported.

That’s actually not a bad idea. Based upon my observations there are many students at Emory University in dire need of professional help.

The student newspaper also took a few jabs at Mr. Trump – calling him “an offensive man” who has made “racist, sexist and xenophobic statements.”

Mr. Trump is also a close friend to New England Patriots coach Bill Belichick – but that’s a topic for another day.

“If we shut down the opposition, we lose our purpose as a university,” he opined. “We lose the courage to inquire, and we lose the ability to engage with the contention that we will encounter outside of the Emory community.”

Ironically, there was no outrage from liberal students or the university administration or the campus newspaper in 2014 when protesters drew chalk outlines of bodies during a Black Lives Matter demonstration.

I reckon at Emory University black lives do matter, but the lives of Trump supporters do not.

It’s unclear at this point when the unrest at Emory will subside. It may be necessary for Georgia’s governor to call out the National Guard.

And there are unconfirmed reports that a FEMA caravan was spotted traveling South on Interstate 75 – with piles of baby blankets and crates of pacifiers.

But a source at the Centers for Disease Control tells me there are grave concerns that what happened at Emory University is not an anomaly.

And they fear that if the Republicans nominate Donald Trump – it could spawn an epidemic of micro-aggressions on university campuses across the United States.

This has been a Fox News Alert.