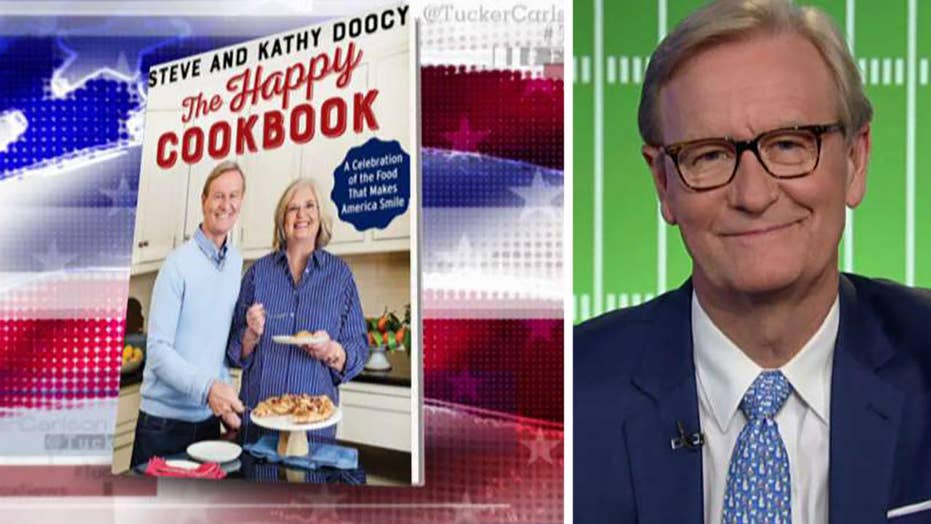 Steve Doocy shares a taste of 'The Happy Cookbook'

When my wife Kathy and I were first married she was just learning how to cook. She had a limited menu of homemade meals that consisted mostly of lasagna, baked chicken and a killer salad dressing (it substituted bacon grease for olive oil, so it really COULD be a killer).

Over time she expanded her repertoire of recipes via those slim booklets you find next to the grocery store cashier, Kathy was also collecting cookbooks with easier recipes.

One summer day knowing we’d be grilling later, I asked her to try to make potato salad. I grew up in Kansas loving my mom’s version and could not wait until my new bride mastered her own.

She found a recipe in a cookbook and followed every instruction until she could announce proudly, “It’s perfect!”

(Check out this 2018 picture of Kathy’s Perfect Potato Salad, from page 72 of “The Happy Cookbook”).

She asked me to carry the bowl of potato salad to the table, which I did as she finished prepping dinner in the kitchen. She brought out the medium-rare London broil and started to sit down, then began screaming, “What happened to my potato salad!?!?”

Actually, nothing happened to it. However, as a state fair blue-ribbon-winning chef myself, I felt that it lacked something, so I added what my mom always put on the top of her potato salad: paprika, and plenty of it, just like everybody we knew in Kansas. Clearly the cookbook she was using forgot this crucial element, so I added it as a public service.

In hindsight, Mom had always made a traditional potato salad, which consisted of white potatoes, white onions, white eggs and snow-white Miracle Whip. It begged for some color, so she’d add the red badge of paprika. Kathy’s potato salad was like a color wheel explosion with green, orange, red and white, it didn’t need anything on top – especially a random red.

“It…was…perfect…” she said, her voice trailing off.  I knew I’d hurt her feelings; she was angry that she’d spent two hours making something that her husband vandalized – in four shakes from a spice jar.

Lesson learned: never screw with somebody’s potato salad or anything else they’ve invested time and energy into creating. We all have our own ideas of what should be in a recipe, but if you want to go rogue and doctor somebody else’s masterpiece, ask first – or make it yourself.

After my little paprika experiment, I was worried that Kathy was still angry, and I’d come home to discover she’d gotten a new recipe from that movie – you know, the one where that nice lady Glenn Close shows how to cook a rabbit.

That’s where I wake up in the dream, every time.

There's something about wives with knives.

But I will say, that I’m sure if my wonderful wife Kathy served rabbit, it would be delicious…if properly prepared with a dash of…oh, never mind.

Steve Doocy currently serves as co-host of FOX News Channel's (FNC) FOX & Friends (weekdays 6-9AM/ET). Based in New York, he joined the network in 1996. His latest book is, "The Happy Cookbook." Click here for more information on Steve Doocy.