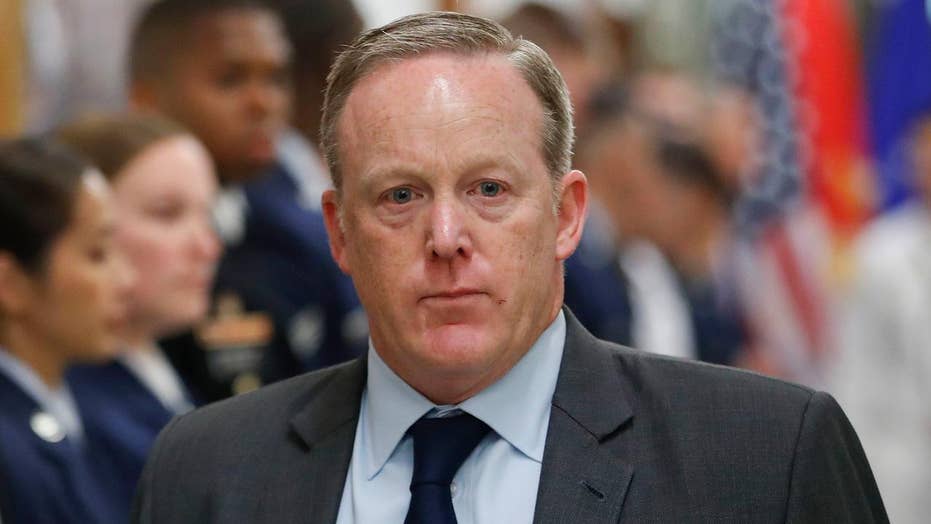 Benito Mussolini once said of his country: It’s not impossible to govern Italy. It’s useless.

The same can be said for trying to explain what Donald Trump is thinking and what he’ll do next. That is an exercise in futility and frustration, as Sean Spicer found out this week.

The appointment of Anthony Scaramucci as White House Communications Director left Spicer as a man without a country in the Trump administration. And what Spicer, who resigned Friday, should be thinking is: good luck, pal!

Last year, Fox Business Network was selected to host one of the debates among Republican candidates for president. Spicer at that time was chief strategist and communications director for the Republican National Committee and so was deeply involved in preparations for the event in Charleston, S.C.

White House Communications Director and spokesman Sean Spicer (L) stands with U.S. President Donald Trump at the conclusion of an interview with Reuters in the Oval Office at the White House in Washington, U.S. February 23, 2017. REUTERS/Jonathan Ernst - RTS101X8 (REUTERS)

I had several interactions with him, and found him to be a man of honor and integrity. When he saw things developing in a way that might not help the Party, he said so. He had the interests of all the candidates in mind, and treated them equally – at least when he was speaking with us.

I was surprised when Sean accepted the job of White House press secretary. The Trump family’s animus toward the news media had been clearly foreshadowed, and he must have known he would quickly be at odds with the journalists he was supposed to keep informed.

What I bet surprised even Sean was the all-out warfare that quickly developed with the White House press corps, which has an inflated opinion of itself and its mission. And that mission, it soon became clear, was to delegitimize Trump’s presidency.

Sean’s temper sometimes boiled over in public, and it didn’t help his image. He was in the unenviable position of walking into a journalistic lion’s den on a daily basis, knowing he would be pummeled mercilessly – but never into submission.

To those Americans who still support Trump, Spicer’s feisty exchanges with reporters were a welcome push-back on a profession for which they have little respect.

When Spicer allowed beyond-the-Beltway journalists to Skype in their questions, the usual suspects camped out in the press briefing room were outraged. How dare you give those country bumpkins direct access to the White House! You have to go through us!

Spicer also exposed the vanity of the presidential press corps. The truth is, they love being on TV. When Sean announced that the daily briefings would be transmitted by audio only, the collective stamping of little feet could be heard clear across the Potomac.

But even as he was settling scores with the press corps, Spicer was being undermined by his so-called colleagues in the administration. Trying to explain accurately what the president was thinking and what he intended to do was downright impossible. Why? Because Spicer was being left out of the meetings where decisions were made and strategy crafted.

Explaining Donald Trump is like handling public relations for Kim Jong Un. And Spicer met the same fate as someone who disappoints the little big man of Pyongyang.