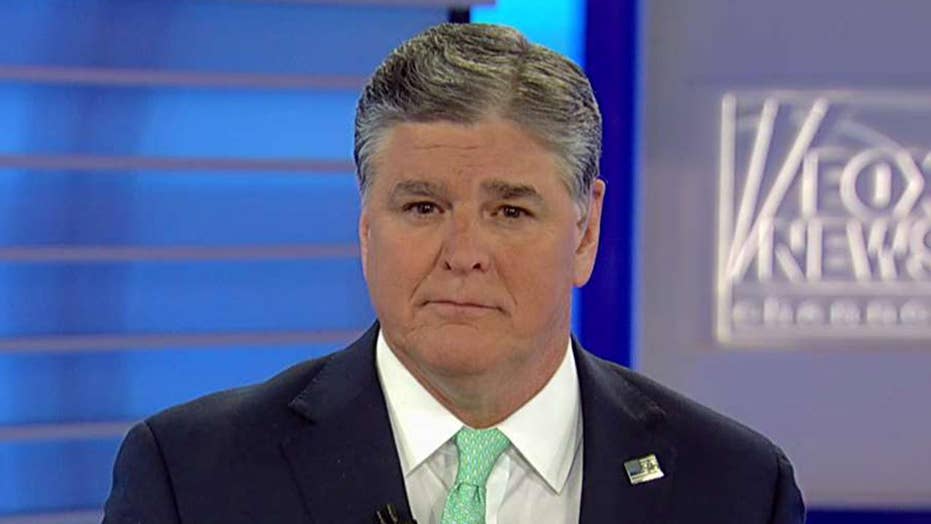 NYT: FBI opened inquiry into whether Trump was secretly working on behalf of Russia; was this retaliation for James Comey's firing?

Time for a bombshell "Hannity Watch" from the “Deep State." It's the abuse of power corruption, we've been telling you all about this. It is far worse than we have ever known until this point.

We know top people in the FBI filled with hatred and frankly, anti-Trump rage, who have put aside all values and their blatant political bias, were seeking redemption for the firing of James Comey. They actually plotted to destroy your duly-elected president. And this is way beyond what we already knew up until this point. According to, as usual, anonymous sources in the New York Times report last Friday, two days after Comey was unceremoniously terminated, several top FBI officials actually questioned whether or not President Trump was working directly for Russia. They did this without a single shred of evidence, zero probable cause, zero proof of any collusion. It was a witch hunt. The president has been right from Day One.

They opened an investigation into whether or not Russia directed the president to fire their beloved Trump hater, James Comey. This, despite Comey's testimony that there was no evidence of collusion -- for nine months they have looked into this, and Trump was not the target of the investigation.

Remember, even Comey, the Trump hater that he is, admitted that the president could fire him for any reason. Nobody in the media seems to want to tell you that. Now, Rep. John Ratcliffe, R-Texas, told our Fox News' Catherine Herridge, "In May of 2017, political bias infected senior FBI leadership and emotion, not evidence, drove their decision-making."

Now, his closed-door interview with the former FBI council James Baker revealed this - and this is important: "FBI senior leadership could not accept that Comey was fired for cause, and the president had the constitutional authority to terminate Comey."

So, they begin the witch hunt, which had already started nine months earlier. President Trump's former attorney, John Dowd, has called the FBI's anti- Trump operations a political coup. "Little did I know that it appears that they were all in it together," Dowd said. "I mean, Rosenstein, Comey, Mueller, McCabe, the whole crowd, and that they were out to get this president, no matter what. I don't think they sincerely believed anything about Russia. This is our worst nightmare, that someone with that kind of power would then decide to go after the president. I mean, it's a coup. It's an attempted coup by Comey and his crowd. And that the evidence is all there. I take "The New York Times" article as an admission of their bad behavior."

Admission of corruption and abuse of power by people that are unchecked. A bureaucracy unto itself, unlimited powers, no accountability. Is any of this good for America? Did these "Deep State" officials that we have been uncovering now for nearly two years, do anything over than hate the president? And are you really surprised?

The same people that yawned. We know it is incontrovertible. Hillary Clinton obstructed justice. She destroyed, subpoenaed emails, 33,000 of them. Washed hurt hard drive with BleachBit, smashing smartphones and iPhones with a hammer and taking away SIM cards. These are the same people who look the other way when Hillary and the DNC funneled money through Perkins Coie, a law firm, a campaign finance violation to hire an op research firm, to hire Christopher Steele, a foreign national, to give us Russian lies.

Never forget the hate-Trump Democrats and hate Trump media -- they have been tied at the hip the whole time, reporting innuendo, lies, conspiracies daily.

These are same bureaucrats who all but applauded when the Clinton's funneled cash used to hire Christopher Steele. Why? To produce a dossier that we now know were full of lies, misinformation and propaganda about President Trump, which we now know today are debunked. The same people who help disseminate those Russian lies that she paid for, to you, the American people, and throughout the highest levels of our government doing that before an election. So-called trusted officials who used the dossier to defraud a FISA court multiple times to spy on a Trump campaign associate -- by the way, a fraud before the court.

These are the same people who used that dossier to open up an investigation into Trump. This all has happened. And, yes, a baseless investigation into a president being controlled by Russia is now just par for the course. And the hysteria of the media is even worse.

Remember, this was nine months after they already had been investigating a so-called collusion, and by nine months period of time, Lisa Page, Peter Strzok, James Comey, Andrew McCabe -- all hate Trump -- and all said they had nothing.

Former Clinton pollster Mark Penn who recently wrote an op-ed, he points out the blatant, unequal justice under the law. "Somehow every clear security breach in the Clinton camp was no big deal while every fourth hand contact with someone who could possibly be linked to Russia was evidence that Donald Trump was secretly serving as a Russian agent," he wrote.

And despite everything, the special counsel's investigation rolls on. They are not looking at Hillary Clinton or the phony Russian dossier that she paid for. Their focus is singularly on President Trump and everyone around him.

However, at least one so-called journalist from the hate-Trump media is trying to play down expectations while people are hyping up every second, every minute, every hour of every day about Trump and Russia and about the Mueller report. ABC News' Jonathan Karl says the findings of Special Counsel Mueller's report may be "anticlimatic."

Honestly, I don't trust Karl and the hate-Trump media. Given the overwhelming partisan makeup of Mueller's team and their behavior throughout this process, consisting of high-power Democratic donors and attorneys, mark my words: They have and will continue to destroy the presidency of Donald Trump. They've been doing it now for two years, and they did it before the election.

Here's the problem. This is what should concern every American. If these Deep State actors succeed, forget about free, and a fair justice system. It's done. Equal justice under the law and applications of our laws are dead in America. Might as well keep the Constitution as we know it and shred it because that's over, forever.

Never forget the hate-Trump Democrats and hate Trump media -- they have been tied at the hip the whole time, reporting innuendo, lies, conspiracies daily.

Adapted from Sean Hannity's monologue from "Hannity" on January 14, 2019.