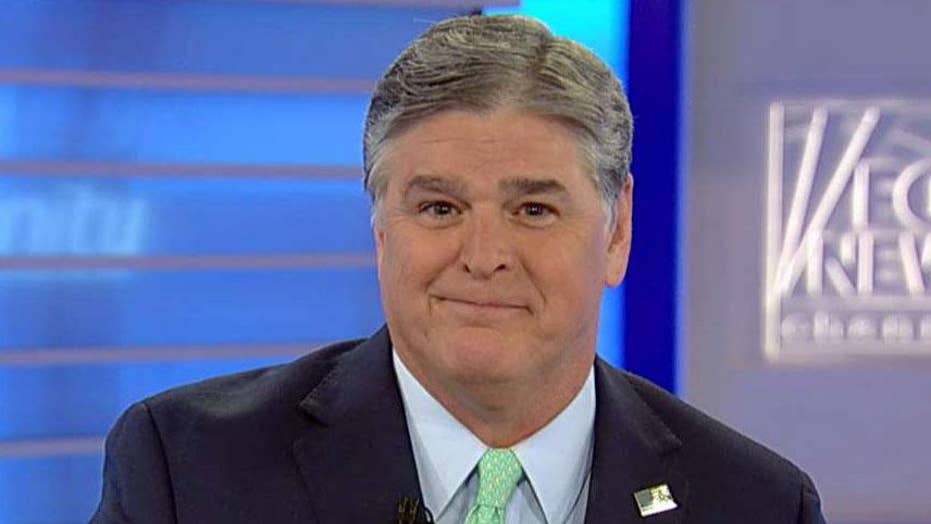 Hannity: The hate-Trump Democrats are gearing up to carry out their agenda

Nancy Pelosi says she will not rule out indicting or impeaching President Tump.

Nancy Pelosi has officially taken back the gavel, and now the hate-Trump Democrats are gearing up to carry out the agenda they were hiding all during the election and we were warning you about.

So, here it is, Day One of the new Congress. A Democrat representative has already introduced articles of impeachment. (They need to read the Constitution. It would be a nice intellectual exercise for them.)

And the newly-crowned speaker of the House, Nancy Pelosi, is refusing to rule out a plan to impeach President Trump.

All these things that these Trump-haters wouldn't tell you during the campaign, now they are revealing it. We were right from the beginning. In addition to impeachment, Democrats are also preparing new legislation that demands 10 years of the president's tax returns. Oh, that's so important for your life. And you better believe they plan for a big tax cut. That's probably all imminent.

There are no moderates left in the Democratic Party, which is really sad. Henry "Scoop" Jackson, more conservative Democrats that want to get things done -- coming together, bipartisanship -- I don't see it.  As the Democratic Party gets pushed further and further to this extreme radical left, watch what's going to happen.

Democrats will never, ever, ever -- in spite of all their hopes and prayers and dreams and their giddiness and their excitement and the hate-Trump media saying it -- they are never going to get two-thirds of the U.S. Senate to vote to convict Trump on impeachment. Never going to happen.

We have incoming socialists Alexandria Ocasio-Cortez and Rashida Tlaib. they are joining their fellow comrade, Bernie Sanders, in Congress. They're planning to spend a lot of your hard-earned money. Single-payer, Medicaid for all, government-funded higher education for all, a green New Deal with massive government funding for "renewable clean energy." Didn't we try that? Solyndra, anyone?

Now, they are not just coming for your crumbs. They want the entire meal. But let not your heart be troubled.

Here's the big news: This is all one big show. No bill is going to pass without the approval of the Republican Senate or the Republican president. And thanks to the president's hard work for the midterm elections, Republicans picked up seats in the Senate and they have a solid majority.

Let me make a prediction: Democrats will never, ever, ever -- in spite of all their hopes and prayers and dreams and their giddiness and their excitement and the hate Trump media saying it -- they are never going to get two-thirds of the U.S. Senate to vote to convict Trump on impeachment. Never going to happen. So, they are wasting America's time and they are stopping progress.

Adapted from Sean Hannity's monologue from "Hannity" on January 3, 2019.


Sean Hannity currently serves as host of FOX News Channel’s (FNC) Hannity (weekdays 9-10PM/ET). He joined the network in 1996 and is based in New York. Click here for more information on Sean Hannity.