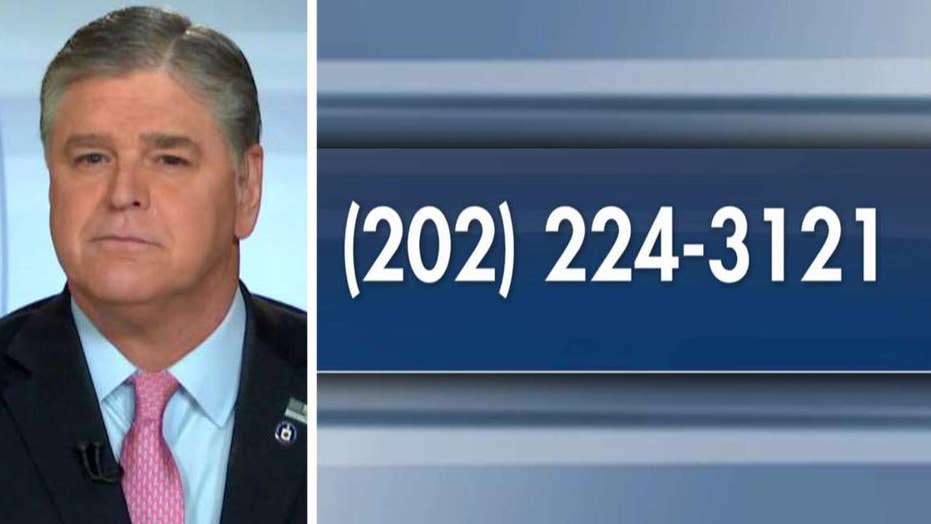 Hannity: Call your member of Congress and demand they do their jobs and secure our borders

People on the left, they claim to have a monopoly on compassion. Conservatives are coldhearted, they say. They're even selfish and greedy because they want low taxes and less government bureaucracy.

They say we're mean spirited for wanting to curtail entitlements. Not true. I don't know any Republican that wants to get rid of Social Security or Medicare. That's one of those campaign lies.

Democrats are always generous, but with other people's money. But when it now comes to what is a real life or death crisis at our southern border, they are nowhere to be found. In fact, the Democrats, the radical left's new talking point is to call what is death and destruction and chaos, caused by unsecured borders, nothing more than a "manufactured crisis." The first thing you've got to notice is how the hate-Trump Democrats and the hate-Trump media speak in one voice. They have one talking point.

As we promised you at the beginning of the year -- and you will not see on any other network -- we're going on show what you real victims of a crisis at our southern border. Men, women, husbands, wives, children, parents, those are all human beings that have been killed because we have unsecure southern border. They have real names. That includes police officer Ronil Singh. He was gunned down by that illegal immigrant, just after Christmas. And Officer Singh left behind a wife and a 5-month-old baby boy who will never know his father.

Democrats, are you really prepared --  the media, Democratic Party, liberals --  are you going to look at this man's face and tell his family that his death is a manufactured crisis? Where have your hearts gone?

And earlier this week, we interviewed the parents of Pierce Corcoran. He was killed by a suspected illegal immigrant, driving on the wrong side of the highway without a license, without insurance in the country, for 14 years. Are Democrats going to call the Corcorans and tell them what happened to their son is a manufactured crisis?

What about Josh Wilkerson or Dominic Durden or Sergeant Brandon Mendoza or Jamiel Shaw --  I can keep going. Do Democrats really want to you believe this is some grand conspiracy, a manufactured crisis?

Democrats, are you really prepared -- the media, Democratic Party, liberals -- are you going to look at Officer Ronil Singh's face and tell his family that his death is a manufactured crisis? Where have your hearts gone?

Now, we do have "angel" parents, those who have lost their children because of open borders. They are speaking out and they have done so many times in the past. They are reminding some of American's politicians and their best friends in the media that this is not a political gain for them. This is a crisis, a clear and present danger. Real Americans losing real lives, needlessly, and real families suffering -- if you might say a word -- "permanent separation."

Now, I've been to the border, what, 12, 13 times now. Last time I was down with then-Texas Gov. Rick Perry and sat in a security briefing. 642,000 crimes were committed against Texans alone in a seven-year period. In just the past two years alone, 4,000 criminal aliens have been arrested for homicide. In fact, over the past two decades, criminal immigrants have been responsible for tens of thousands of murders. 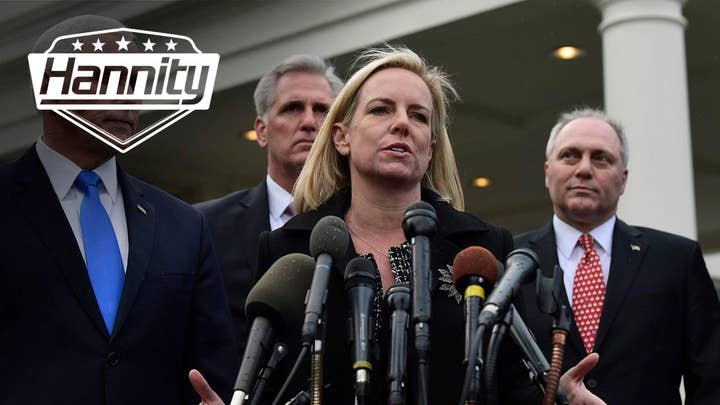 Now, to these families, our fellow Americans, that crisis is always present. Their lives have been devastated, forever altered, their loved ones murdered. And yet, hate-Trump Democrats, hate-Trump talking point media people, they are to suggest this is a manufactured crisis? Really?

We're talking about an all-too-common occurrence. It should never happen. Law abiding men and women killed by illegal immigrants that don't respect our laws, our sovereignty, our borders. They shouldn't be here at all.

Now, if we secured the borders, lives are going to be saved. People will be protected. There won't be permanent separation, as in the cases we're telling you about.

Adapted from Sean Hannity's monologue from "Hannity" on January 9, 2019.