Hannity: Democrats are in a psychotic state of denial

Bitter over the Mueller report, Democrats consider a subpoena for the unredacted report, voting to hold Barr in contempt of Congress.

The Democratic mob is out of control, grasping at straws. It is officially in a psychotic state of denial. This is the absolute truth and reality that the Democrats in Washington and the media mob cannot possibly come to grips with -- the reality, the truth that will set them free. They are in now a psychotic rage and it keeps spinning over and over in their little liberal brains.

Every single thing you will hear from this day forward about Mueller, Russia and collusion and obstruction and President Trump is nothing but forever meaningless and just a lot of noise by bitter people. Four separate investigations concluded no collusion between the Trump campaign and Russia -- none, zero, nothing. Nothing the Democratic, hate-Trump mob says is going to change that.

Mueller is done. It's over. This is worse for Democrats than Election Night 2016, especially when the exit polls showed at 5:15 that Donald Trump wasn't going to win. It's like when the polls in 2004 predicted John Kerry would be the next president. Wrong again.

Look at the liberal tears, the panic, mayhem and downright unhinged nature of everybody. The hysteria continues. And frankly, if I may be blunt here, this is now officially a mass mental disturbance never before seen on this kind of level. It's a full-blown psychotic meltdown.

The rage Trump mob has a new favorite target. They have to blame somebody for themselves, for the lies they told, the conspiracies and the hoax they believed and spread. This is where it gets so absurd. Listen closely to this: Under federal law -- yes, the law -- Attorney General William Barr was not required, at all, to release any portion of the Mueller report. He didn't have to release one word.

But in an effort to be transparent, he did it anyway. He didn't have to. The attorney general released the report after redacting what was legally required, including the grand jury investigation, investigatory sources and methods.

Prior to full release, we know Barr submitted on March 24th a public letter outlining the report's key findings --  no collusion, no determination on obstruction. But the attorney general, the deputy attorney general, the Office of Legal Counsel, all concurred pretty much within an hour that there was no obstruction. They offered Mueller the chance to review Barr's letter before he sent it. Mueller declined -  speak now or forever hold your piece.

Mueller later admitted that Barr's summary was in no way inaccurate or misleading, despite writing a whiny letter about he's misinterpreted by the media mob. Me and Mueller have something in common. We see the media mob for who they are.

Barr testified before the Senate Judiciary Committee, but refused to be interrogated in the House. He wasn't going to be questioned by the congressmen and women that are accountable and elected to office but by Nadler's lawyers and staff. This has never happened in the 206 years of history of that committee, and Barr was not going to let it happen now. He is still willing to testify before actual committee members. I think they are afraid of him. 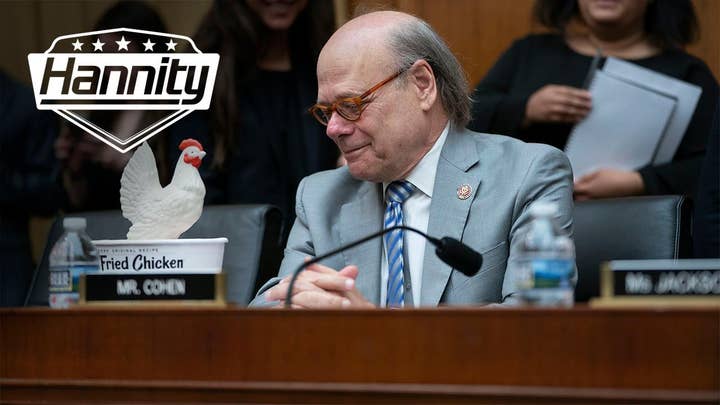 During this entire process, Barr told the truth. He committed no crimes. He went above and beyond what the law requires in terms of transparency. Now, laughably, because of what I just outlined for all of you, and described, a list of prominent Democrats are still calling for Barr to resign or be impeached, including "Crazy Uncle Joe" Biden, Elizabeth Warren, the cowardly [Adam] Schiff and, of course, there's always Maxine Waters. No one else is calling for impeachment; she is.

And citing little evidence, House Speaker Nancy Pelosi even claims Barr committed the crime of lying to Congress. (No, he didn't.) House Judiciary Committee Chairman Jerry Nadler is moving to hold Barr in contempt of Congress. And his colleague, yes, Chicken Little himself, Congressman Steve Cohen is calling for Barr to be locked up.

This is why I think Democrats have lost it and are unhinged. Congressman Cohen wants to handcuff the attorney general of the United States, have the sergeant of arms drag him before the committee or to prison. No trial, no charges, nothing.

Adapted from Sean Hannity's monologue from "Hannity" on May 6, 2019.