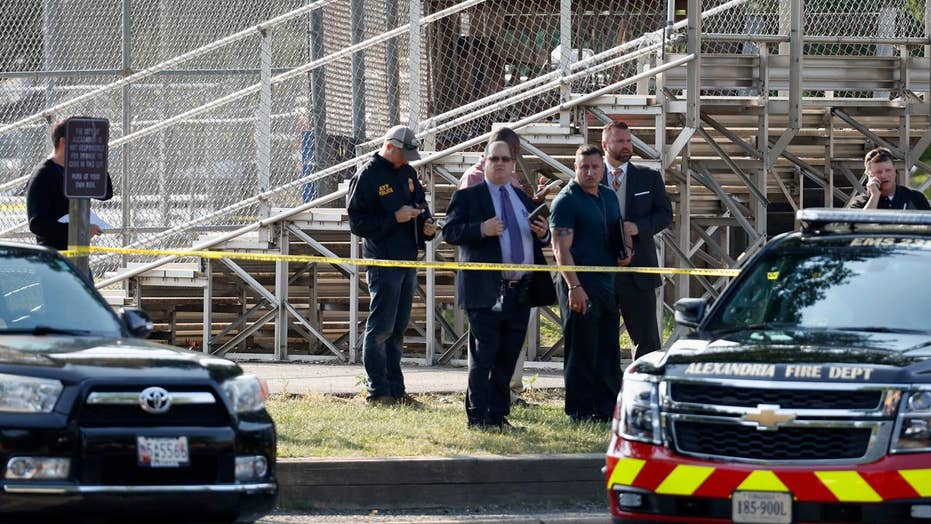 Lawmakers unite following attack on congressional baseball practice in Virginia; reaction from Dave Hoppe, former chief of staff to Speaker of the House Paul Ryan, and Michele Jawando, vice president of the legal action for Center for American Progress

Remember the outrage over feisty Trump supporters roughing up protesters during the campaign? How Trump was blamed for “inciting violence” and accused of egging on his followers?

Where is that outrage today, when a Bernie Sanders follower attempts to slaughter senators and their staff members – because they are Republicans? Where is any sense of accountability among the leftists who have preached hatred of our duly and legitimately elected president for months, encouraging the vile epithets and smears that pepper the speech not only of activists and politicians but of late-night comics and supposedly responsible journalists? Is the New York Times behaving responsibly when it publishes a piece by columnist Charles Blow titled “Donald Trump: Gateway Degenerate?”

Where is the condemnation of a theater production of “Julius Caesar” that makes headlines for celebrating the bloody stabbing of “a blond, Trump-like Caesar in a red tie,” as the Times acknowledged? Not only are there few protests, CNN’s Fareed Zakaria calls the revolting spectacle “a masterpiece.”

How can second-rate comedian Kathy Griffin think she’ll be celebrated for holding up what looks like the severed head of the president? Or Snoop Dogg think that a music video featuring a mock assassination of a Trump look-alike in a clown costume is appropriate? Did Madonna not think she’d stepped over the line when she mused aloud about blowing up the White House?

Why isn’t there more condemnation of NSA contractor Reality Winner, who was accused of leaking classified information for the purpose of undermining the president, and who wrote in her diary of that she wanted to “burn the White House down?”

Writing in March of this year, The Hill reported that “President Trump has been the target of declarations of violence on a near daily basis.” Yet, “when it comes to this constant flow of threats,” they wrote, “there seems to be little outrage from the nation’s leading journalists and pundits.”

Seriously, can you imagine what the reaction might have been if someone had publicly wished Obama dead? President Obama more than once called for greater civility in our political discourse; turns out his fans prefer vitriol.

Somehow liberals consider it perfectly sensible to provide safe rooms on campuses – complete with Play Dough and teddy bears -- to protect snowflakes anguishing over the election of Donald Trump, but also reasonable to allow the most grotesque vulgarities and threats to be hurled at our president.

Somehow liberals consider it perfectly sensible to provide safe rooms on campuses – complete with Play Dough and teddy bears -- to protect snowflakes anguishing over the election of Donald Trump, but also reasonable to allow the most grotesque vulgarities and threats to be hurled at our president.

Our president. That’s the problem, of course. No one on the Left, starting with Hillary Clinton and Barack Obama, can accept that the man they considered beneath them on every score actually beat back not only their cherished progressive agenda, but also their candidate. They do not understand it, they do not accept responsibility for the shocking upset, and they are doing everything in their power to undermine President Trump and his supporters.

The fight has become violent because they cannot and did not win with words. They had the media behind them, they had the money – but none of it mattered to the millions who rejected Obama’s world vision and Hillary’s cynical coronation. The frustration on the Left is palpable; they are so completely sure they are right about everything – encouraged by our popular culture and liberal press – they refuse to recognize an opposing point of view. They don’t allow contradiction on college campuses and they don’t accept it in the media. When the New York Times dares to hire a conservative columnist who questions the consensus on climate change (but also calls Trump’s views malevolent) the publisher has to write an apology to the offended who rush to cancel their subscriptions.

After the Orlando massacre, Hillary Clinton also called for greater civility; but it wasn’t very civil of her to describe Trump followers as “deplorables.” It wasn’t particularly uplifting to describe Republicans as your enemies.

In the same vein, Hillary’s sorrowful “excuses tour” is not helping the country to heal. Instead of accusing Comey, sexism, Putin, the DNC and so many others for her loss, she would win plaudits for telling her supporters and other embittered Democrats it is time to stand down. Not to give up their legitimate efforts to win back seats and argue a different path for the country, but to demand that the indiscriminate savaging of the president and his family must stop.

To his credit, Bernie Sanders has mostly taken the high road, continuing to preach revolution but largely avoiding the personal scrum. That’s probably why recent polling shows him to be the country’s most popular politician. There’s a lesson there.

Lady Gaga, at one of those last-ditch concerts put on by the Clinton campaign on election eve, told a happy, youthful crowd that they needed to embrace Trump supporters. "I know that it is important for this message, too, to be spread -- that we do not need to hate his followers," she said. "If we are true, true Americans, then we must go from viewing his followers as our adversaries to viewing them as our allies."

That was a gracious sentiment, and the right message. Of course, she said that before she knew that Trump would win.