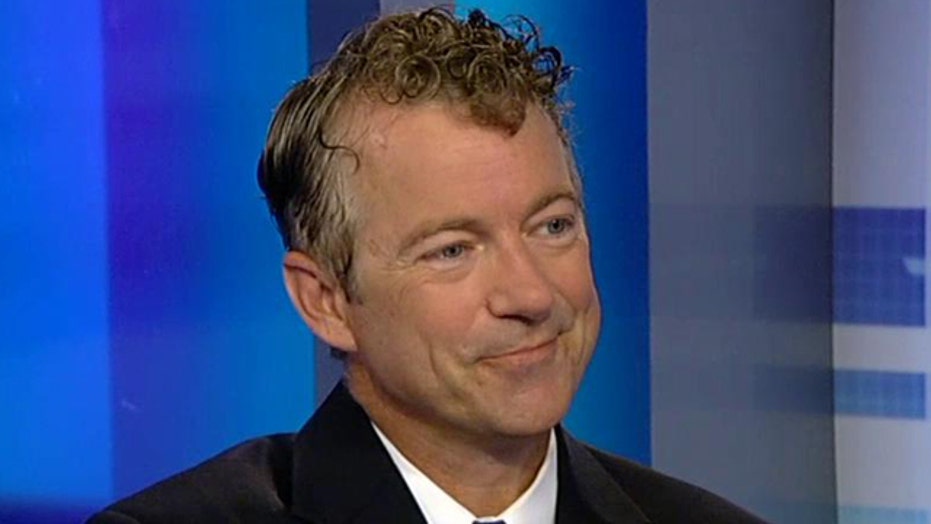 Sen. Rand Paul on President Obama's reported plans to do an end-run around Congress for an international climate change deal, why he called Hillary Clinton a 'war hawk' and using his eye doctor training in a recent trip to Guatemala

I recently returned from a medical mission to Guatemala organized by the John Moran Eye Center at the University of Utah.

My first connection with Guatemala was in the 1990's.

I met the Hernandez brothers when they were kids. They were led into the examining room by their foster mother.  Though they were blind, both boys still worked together to bring water from the river for their family in a small village in Guatemala.

I met them because of the humanitarian work of Bill and Judy Schwank. Bill was born in Guatemala and came to the U.S. to practice neurosurgery.  His wife, Judy, is an attorney and longtime advocate for adoption.

They brought Juan and Andres Hernandez to me in 1999 to see if I could restore any of their vision. Juan was 8 and Andres 14.

On examination, I found that they had mature cataracts.  Juan could see hand motion and Andres light perception only.  I explained that the vision center in the brain must be stimulated before age of 7 or vision isn't possible-- even if the cataracts are removed. Our hope was that the cataracts were not mature at birth and that the boys had some vision at an early age.

I performed their cataract surgery in Bowling Green, Ky. The Schwanks raised and contributed the money necessary to bring the brothers to the United States.

I remember them well because the boys had never before seen running water and they somehow stopped the drain and left the water running-- a mini-disaster for the foster family.

After the surgery, we waited anxiously to see if the boys would get any vision back.  As the patches were removed, big smiles beamed from each boy. Fascinated, they picked up objects like bananas and  oranges and identified them. They were astounded to discover the color of the sky again. Though their vision wasn't perfect, the surgery did achieve what we call ambulatory vision. The boys could identify objects and find their way around their village.

The boys would be able to perform basic daily tasks and would be of use in the fields.

A few weeks later they flew home to Guatemala. I didn't know if I would ever see them again.

Periodically, Judy Schwank would give me updates on their new life with vision.

I operated on several other children from Guatemala.  One pretty little girl, Juli Estrada was brought to me because her eyes were crossed.  Like the Hernandez boys, the vision center of her brain did not develop properly and we could not restore the vision in the unused eye, but I was able to straighten the eyes and give her a normal appearance.

Fifteen years later, in 2014, I was on my way to Guatemala and the Schwanks had arranged for me to see the Hernandez brothers and Juli.

The Academy of Cataract and Refractive surgeons also helped to organize the trip and brought along a renowned surgeon from San Francisco -- David Chang, M.D.

During the week over 200 patients, many of them blind with cataracts, had their vision restored.

Reuniting with the Hernandez brothers and Julie was a special experience for me. The Hernandez boys' vision was about the same. Though they desperately hoped for some new miracle, the vision center in their brain had not developed and nothing could be done to further improve their vision.

Juli, the pretty little girl with crossed eyes, was now a beautiful young woman with perfectly straight eyes. Because her prescription was unusual we couldn't give her any used glasses but we are sending her a specialized pair from the United States. With glasses, we were excited to see that her vision would be 20/20.

Operating with some of the most talented surgeons in the U.S. was an incredible experience.  Not only was I able to reinforce my skills, but I also learned new techniques from the masters.

Dr. Crandall and his team have done over 60 medical mission trips. His wife, Julie, is an integral part of the leadership that made the examination, measurement, and surgery of over 200 patients go like clockwork.

But nothing compares to emotions of post-op day one when we unveiled the patches. Huge smiles, tears, and praise to God were heard each morning.

One 42-year-old man was overcome with emotion.  He told us how he slowly went blind in both eyes. He lost his job as a truck driver and then lost his wife and family and 40 pounds.  As his patch was removed, he sat there emaciated, tears of joy running down his face, thanking God for this miracle.

While the medical team operated, my son Duncan joined another group to install a water purification system for a local school. Duncan said he wasn't sure the kids understood the significance of the water project, but they certainly liked the soccer balls he gave them.

On our second day in surgery, a man showed up without an appointment and said that his wife had surgery the day before and was now able to see clearly for the first time in years.  He wanted to know if I would remove his cataracts too. I examined him and he too had cataracts such that he was legally blind.  We operated on him the next morning, and his wife was there to help unveil the patch.

It was very moving to witness a husband and wife see each other clearly for the first time in years.

As we wound through the mountains on the way back to Guatemala City, our security team proudly kept us safe from harm. Axel, a strong, quiet man did his job professionally and without obvious emotion but as he bid farewell to us in the airport, I think I saw a tear well up as he sincerely thanked us for what we had done for his fellow countrymen.

I responded, de nada but it wasn't just nothing --the smiles on the faces of previously blind patients is priceless and a reward in and of itself that I will never forget.