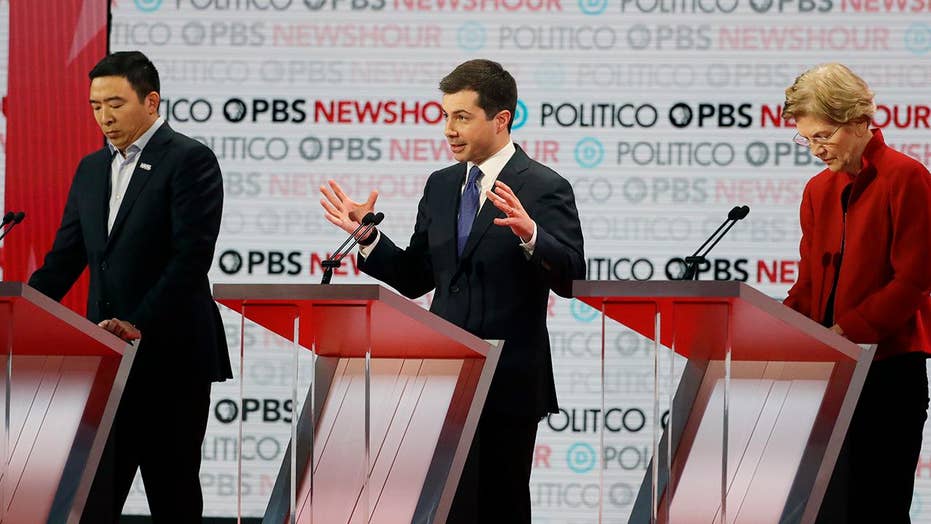 After staging one of the most shameful displays of political theater in American history with Wednesday’s impeachment vote in the House of Representatives, Democrats took their show on the road to Tinseltown Thursday night for a debate by their leading presidential candidates.

But while House Speaker Nancy Pelosi of California and her fellow Democrats might be gloating with glee about culminating their three-year smear campaign against President Trump, it is clear that Democrats are ending the decade not with a bang, but a whimper.

On stage Thursday night we saw Democrats spout the same radical, far-left policies that have transformed the state that elected Republican conservative Ronald Reagan as governor into a hotbed of socialism.

From defending open borders and the job-killing Green New Deal, to doubling down on the pledge by some candidates to eliminate private health insurance despite the $30 trillion-plus price tag, Democrats offered nothing that voters haven’t heard from them before: an extreme, socialist agenda that would put our country on a road to economic ruin and raise taxes on hardworking American families.

And no matter how much Democrats might try to dress themselves up as moderates, it’s clear the specter of socialism continues to cast a long, dark shadow over the Democratic Party.

Fortunately, the American people are never going to let the dreams and delusions of the Democrats become a reality.

That’s because even more than the unpopularity of their harmful policies or impeachment backfiring in the polls, it is clear that the Democrats simply can’t compete with President Trump’s record of delivering real results.

Just consider what President Trump was achieving for the American people while Democrats were ramming a purely partisan impeachment through the House.

Thanks to the president’s pro-growth policies the stock market hit yet another record high.

After a year of needless delay from Democrats, President Trump secured congressional support for the U.S.-Mexico-Canada Agreement on trade (USMCA) that, once passed, will deliver 176,000 new jobs and almost $70 billion in economic growth.

This comes on top of an America First, Phase One trade deal with China that means more agricultural, manufactured goods and energy purchases that will lead to a fairer, more reciprocal trading relationship.

Additionally, Congress passed the president’s paid family leave plan for federal workers and the Senate confirmed his 50th appeals court judge nominee, once again making good on the president’s pledge to appoint judges who will interpret the Constitution as written, not legislate from the bench.

Imagine how much stronger our country would be if Democrats chose to work with President Trump instead of trying to destroy him!

And as we close out the decade, the choice before voters heading into 2020 could not be clearer.

It’s a choice between real results versus the Democrats’ partisan rancor and obsession with overturning the will of the American people.

A choice between a president who has the courage to finally put America First versus politicians who pander and poll-test their strategy on supposedly “solemn and serious” issues like impeachment.

A choice between whether our country’s future will continue to be forged by freedom, or if we are going to follow Democrats’ lurch to the left and submit to the rise of socialism along with unfettered government control over every aspect of our lives.

In his State of the Union address this year, President Trump proclaimed that “America will never be a socialist country.”

And when the American people reelect Donald Trump to another four years in November that will be just one more example of Promises Made and Promises Kept.