In getting rid of the confusion and injustice of Roe v. Wade and Planned Parenthood v. Casey, cases that together have allowed more than 63 million lives to be lost to abortion, the Supreme Court hasn’t really launched a revolution – no matter what Planned Parenthood and company are saying today.

The Dobbs decision is more like a factory reset in which all the legal settings are restored to their constitutional design.

Abortion was not written into the Constitution in invisible ink only to be "discovered" by seven men in 1973. And since the Supreme Court is supposed to be focused on what’s actually in our documents, it was common sense of the "don’t run with scissors" variety that Roe had to go. Consider that our founders prioritized "life, liberty, and the pursuit of happiness" as goals among other inspirational rights – opportunities that are impossible to experience if you’re not alive.

Many are focusing on this line in the decision: "The Constitution does not confer a right to abortion; Roe and Casey are overruled; and the authority to regulate abortion is returned to the people and their elected representatives." But even more exciting to those of us engaged legislatively is the line that "protecting the life of the unborn" is a legitimate state interest in health and safety regulations.

A legitimate state interest in our lives has led to all kind of laws from speed limits to opioid restrictions. Given the dangers and health risks of abortion to women and certainly to the preborn, states have a right to act to preserve and protect the preborn and their mothers. And many pro-life groups are lining up to help.

For the engaged millennial and Gen Z activists that I lead in a 50-state operation, it means bringing the abortion debate to a state capital near you. Americans' desire for less abortion is well documented. Earlier this year, an SFLA’s Demetree Institute for Pro-Life Advancement poll found that 8 in 10 millennials and Gen Z wanted to vote on abortion policy – something Roe prevented. 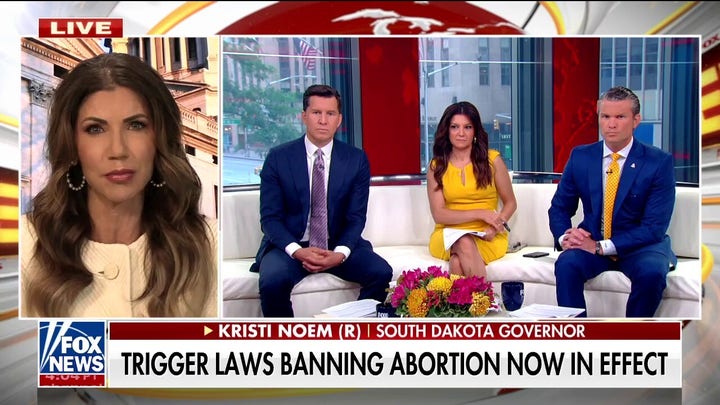 Because more than 9 in 10 abortions take place by 12 weeks, Students for Life Action will prioritize early abortion limits, like protection at conception, heartbeat, and chemical abortion pill bills. With Roe’s false viability line gone, we can finally help many who can’t yet live outside the womb.

Before Roe, most states had limits on abortion and already 13 states are ready to restore humane policies. But there are still things to be done at the federal level. Just ask President Biden, who within hours of the decision rushed to say he wants to "codify Roe," which allowed abortion through all nine months, and to expand chemical abortion pill distribution despite the fact that it’s an abusers’ dream drug and can cause women injury, infertility and even death.

One thing you won’t see from leading pro-life groups are any efforts to prosecute women, something we’ve always opposed as we see her as a second victim undermined by a sales pitch that claims she is alone in the world and incapable of balancing both career and family – so stay at work. The focus of laws will be on the billion-dollar enterprises with the business model of preying on women in a moment of great stress.

A pro-life demonstrator protests in front of the Supreme Court building, on the day arguments were heard in Dobbs v. Jackson Women's Health, in Washington, Dec. 1, 2021. (Reuters/Jonathan Ernst)

The pro-life community and legislators will need to expand services to mothers and families as Texas did. Programs like SFLA’s Standing with You will be even more vital for women seeking information about federal, state and local programs already in place.

Still, this transition to a more life-affirming culture will require struggle and commitment. Today’s generation has been made to feel that those who are not perfect enough are disposable, and that people are the problem, instead of the solution with incredible potential.

Women are told they can't handle career and family, school and family, and urged to end the lives they carry, which certainly frees up policy makers from the hard work of providing needed support. People will need to demand more effort from complacent bureaucrats paid to solve problems, not add to our problems.

That accountability needs to include law enforcement, including Attorney General Merrick Garland, who has stayed almost silent as pro-choice domestic terrorists promise destruction. Our team is dealing with security concerns as never before as threats of murder, arson, assault and property damage are made against peaceful pro-life Americans.

Attorney General Merrick Garland speaks during a media availability at the Department of Justice, June 8, 2022, in Washington. (AP Photo/Alex Brandon)

But let’s get real, anyone who thinks sacrificing children will result in a peaceful society is completely ignorant about the lessons of history.

It took nearly 100 years from the end of the Civil War until the passage of the Civil Rights Act to achieve what Martin Luther King Jr. called a "positive peace." That was achieved through great pain, marches, innocent victims, death threats, death, bombings, and marches, the stinging pain of water hoses, and bus freedom rides and student-led lunch counter sit-ins resulting in days and weeks of jail time.

As a pastor, King knew the truths of 1 Corinthians 13:7, "Love never gives up, never loses faith, is always hopeful, and endures through every circumstance."

Almost 100 years … I pray it won’t take that long for people to come together peacefully to protect life both in law and in service.

Kristan Hawkins is president of Students for Life of America, with more than 1,250 groups on college, university, and high school campuses in all 50 states. Follow her @KristanHawkins or subscribe to her podcast, "Explicitly Pro-Life."