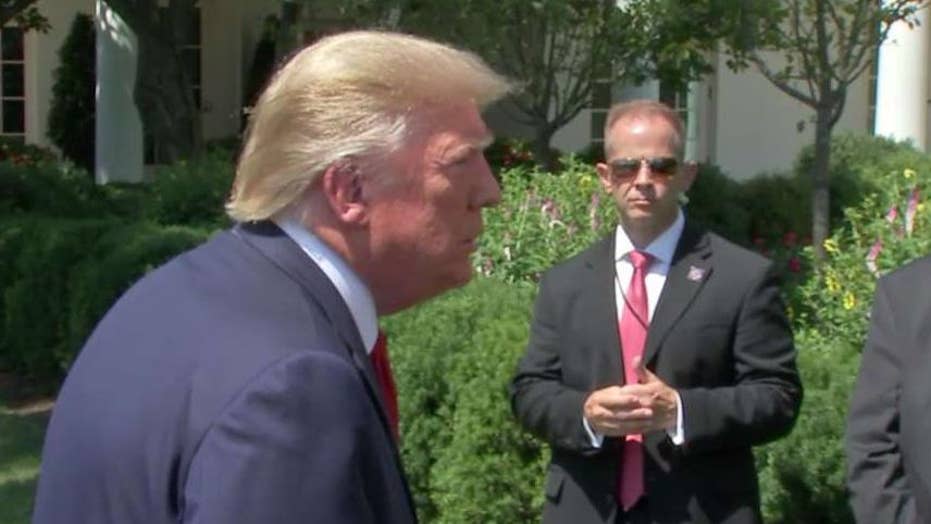 President Trump asserts there is no need for payroll tax cuts at this time because the U.S. economy is strong.

The president said Tuesday he was considering asking Congress to cut the payroll tax for individuals, but then on Wednesday told reporters that “I am not looking at a tax cut now,” adding that “we don’t need it because we have a strong economy.”

News reports said earlier that White House officials were examining the possibility of tax cuts to keep the consumer spending spree in our economy strong in the face of fears that an economic slowdown could lead to a recession and hurt the president’s reelection chances next year.

There are good arguments both for and against cutting the payroll tax, which funds the Social Security program. Individuals and employers each pay 6.2 percent of an employee’s earnings up to $132,900 in income this year. Self-employed people pay the full 12.4 percent. The earnings ceiling typically rises each year to keep pace with inflation.

While it’s impossible to repeal the business cycle, I’m in favor of cutting the payroll tax temporarily to keep our economy from unnecessarily slowing and most importantly to give our nation’s leader a strong hand in negotiations aimed at ending currency manipulation, which is a major threat to our economy over the long haul.

In 2010 the Obama administration cut the individual payroll tax from 6.2 percent to 4.2 percent in response to the Great Recession to boost consumer spending and stimulate the economy. The temporary cut ended in 2013.

With the median annual household income now above $60,000, a 2 percent cut would be work out to at least $1,200 a year – amounting to an additional $100 in the average working family’s after-tax payday each month.

Some advocates of tax cuts argue that it’s always a good time to let people keep more of the money they’ve earned. With the median annual household income now above $60,000, a 2 percent cut would be work out to at least $1,200 a year – amounting to an additional $100 in the average working family’s after-tax payday each month.

So why would anyone oppose putting more money into the pockets of about three-quarters of American families?

One answer might be the approximately $150 billion in lost revenue to the federal government that a one-year payroll tax holiday would likely create.

The ugly truth is that our nation’s national debt is like a hungry wolf crouched in the shadows waiting to consume its prey.

We know almost as certainly as the sun will rise that Congress will not cut spending to offset the fiscal impact of a payroll tax cut on our nation’s budget deficit. So a temporary payroll tax cut simply means that we will once again put another charge on the tab of our children, grandchildren and generations yet unborn.

In 2018 alone, overall interest payments on the nation’s $22 trillion debt amounted to $522 billion, with the net interest that was paid to debt purchasers like China, Japan, banks, pension funds and others totaling $325 billion.
'

To put $325 billion into perspective, even with historically low interest rates, the Office of Management and Budget reports that America paid more on interest payments on the debt to outside entities in one year than we spend on the Departments of Commerce, Education, Energy, Homeland Security, Housing and Urban Development, Justice, Labor and State combined.

And in this Congress as well as the last one, a bipartisan consensus developed that our nation could continue to spend almost $1 trillion more than it received in revenue without consequences.

The problem is that – as Greece discovered earlier this decade – eventually the chickens come home to roost and interest rates go up. What was once an interest payment of about 10 percent of the nation’s revenues and 12 percent of expenditures spirals out of control, forcing lawmakers to choose between two bad alternatives: repay borrowed funds or make draconian cuts in government spending, while raising taxes precipitously.

Or the result could be what happened in Japan: with negative interest rates on government debt, more than 200 percent debt to Gross Domestic Product, almost no growth for two decades, and stagnation and deflation.

So why do I believe President Trump and Congress should nevertheless cut the payroll tax temporarily?

The answer lies in the real reason why our economy still has failed to grow at a robust rate even with tax cuts and regulatory relief: China and other countries’ currency manipulation, which always makes that nation’s products and services less expensive than America’s.

A payroll tax cut would likely increase the deficit by between 10 and 15 percent in 2020. However, it would also have the effect of strengthening our nation’s economy vis-à-vis the rest of the world, giving whoever is president in 2021 a strong hand in negotiating trade deals that are in our national interest, while our trade partners are facing significant economic pressures in their homelands.

Currency manipulation allows China to devalue the yuan to offset the impacts of U.S. business tax cuts, tariffs and regulatory relief, while keeping the prices of goods made in China stable here in America.

While this is a good thing for consumers in the short-term, it is horrible for the U.S. in the long haul because it puts American exporters and domestic manufacturers at a competitive disadvantage. Maximizing the opportunity to solve this much more significant problem makes the decision to support the payroll tax cut a no-brainer, in spite of the short-term deficit costs.

Ending China’s currency manipulation, as well as that nation’s intellectual property theft, is the single most important public policy goal for our nation. Accomplishing this is the key to having any chance of restoring robust economic growth in America.

And only a president dealing with a strong economic hand will be able to win these game-changing concessions from China. To get such concessions, our president will need the ability negotiate a trade deal with China that ends that country’s pernicious effort to dominate the rest of the 21st century.

At the same time, our president will need to put more money into the pockets of Americans, which will help extend low unemployment and wage growth that we currently enjoy.

So my advice to President Trump is to ask Congress for a temporary payroll tax cut. The benefits outweigh the costs.