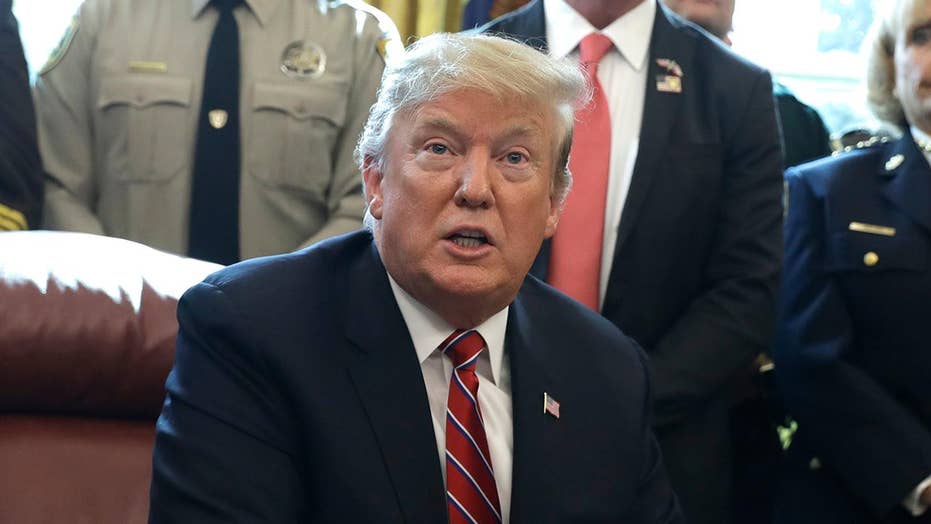 Twelve Senate Republicans stopped Donald Trump from invoking a national emergency to pay for a wall on the southern border last Friday…three times as many senators than needed to pass it. That’s the good news. The bad news? Even more Republicans will be needed to override Trump’s veto. What’s worse is the fact that if more Republicans don’t join Democrats in overriding this veto they will provide Trump even more power when he has a history of not acting in the best interest of our country.

As I recently wrote for Fox News, “Do you want to confer extraordinary powers upon Donald Trump at a time when he faces extraordinary threats to his ability to stay in the White House?” Once again, the answer is no.

Now, it is even more important to override Trump’s veto in light of his comments last week, about the use of force at his disposal. He said in an interview with Breitbart “I can tell you I have the support of the police, the support of the military, the support of the Bikers for Trump — I have the tough people, but they don’t play it tough — until they go to a certain point, and then it would be very bad, very bad.”

Those comments sounded like a threat against the American people. Not a foreign adversary – the American people. When Trump makes these claims it’s not an idle threat. Everything Trump is going to do is done in plain sight. Everything. If you listen there are no surprises with Trump. He makes clear what he’s going to do when he makes statements like, “Russia if you’re listening, I hope you’re able to find the 30,000 emails that are missing,” referring to Hillary Clinton’s emails. The problem is many Republicans in Congress don’t want to believe it and even fewer are willing to do anything about it. In light of his latest claim, now is the time for Republicans in Congress to stand up to Trump by overriding his veto.

If Republicans in Congress don’t override his veto, then Trump will have access to 136 provisions that give him more control over our country, our lives, our military, and they won’t be able to stop him. Once Trump is provided the opportunity to declare a national emergency, what would stop him from imposing martial law? Is that what Trump was hinting with his threat about the use of force?

It is not beyond the realm of possibility that Trump, with the walls closing in on him from the Mueller investigation, as well as multiple congressional and law enforcement investigations, to use martial law to keep the consequences at bay and to stay in the White House. Furthermore, if Trump did declare martial law, would the Republicans in Congress stop him? Would the judges they approved stop Trump if it went to the courts? Would the courts even operate under these circumstances?

If Republicans don’t vote to override the veto, giving Trump more power that he then uses to hurt our country, Republicans won’t only lose their elections.

Congress passed the Posse Comitatus Act in 1878 which forbids military involvement in domestic law enforcement without congressional approval. Would Republicans stand up then? Do Republicans want to take that chance? Do Republicans want the country to be subjected to martial law under Trump? Those examples are just some of the possibilities if Republicans don’t override Trump’s veto and they shouldn’t be taken lightly. Think of all the things Republicans thought Trump would never do and then he did them. It’s no longer if Trump will do it rather when Trump will do it.

Trump is daring Republicans to override his veto because he believes they won’t do it. As he said on Friday, sounding like a guy placing an order at a fast food restaurant, “When I need your vote, I’m going to let you know. I didn’t need the vote because we all knew it was going to be a veto, and they’re not going to be able to override. It’s going to go very quickly.”

No one better exemplifies the tortured inability of Republicans to stand up to Trump than Senator Ben Sasse, R-Nebraska, who has become the new Jeff Flake of the Senate. Known for his moralistic pleadings bemoaning Trump’s behavior – even writing a book about the political crisis facing our country featuring Trump – Sasse acts like a bystander without the ability to stop him rather than a United States Senator who has a vote that can do just that.

Sasse is also one of 22 Republican Senators up for re-election in 2020 and trying to avoid a primary by supporting Trump and betraying his principles. Every Republican in the House is up as well. It will take 27 House Republicans, 14 more than their initial vote, and 20 Senate Republicans, eight more than last Thursday, to override Trump’s veto.