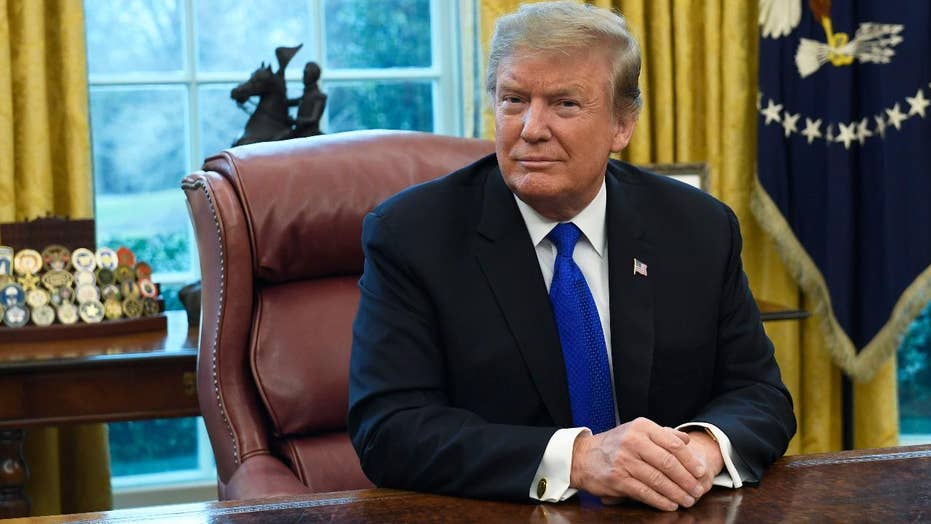 GOP strategist Kimberly Klacik says Democrats will try their best to stop the president’s national emergency declaration ahead of the 2020 election cycle.

Do you want to confer extraordinary powers upon Donald Trump at a time when he faces extraordinary threats to his ability to stay in the White House?

That is the question every Republican Senator must ask as the vote to allow Trump to declare a National Emergency regarding the southern border looms large this week.

The answer is no.

SEN. GRAHAM MAKES PREDICTIONS ON WHAT WILL HAPPEN WITH THE RESOLUTION TO BLOCK TRUMP'S EMERGENCY DECLARATION

Mexico is paying for the wall. That’s a lie.

Only a wall will protect the southern border. That’s a lie.

For that reason alone every Republican Senator should vote no.

The moment a National Emergency is declared, Donald Trump will be able to act more like a dictator than the leader of the greatest democracy on earth. Trump will have access to 136 provisions that give him control over our country, our lives, our military, with little to stop him including Congress, with the stroke of a pen. It is not hard to imagine what Trump would do with that power based on his record to date, and how much worse it could be, if he is faced with the Mueller Report, indictments or impeachment that threaten his ability to stay in the White House.

When you consider that far more responsible presidential predecessors than Trump abused their power during true National Emergencies, that too should give every senator pause from granting this authority to him.  After all, Trump has already interned asylum seekers and immigrants, while separating children from their parents. At his rallies, Trump continues to encourage chants of “Lock her up.” Trump routinely criticizes the press inciting threats of violence against them. And his supporters now openly talk about a civil war in this country while threatening violence as well.

Do Republican senators now want to give Trump even more power given how he has used his constitutional power in the last two years?

That is why Republican senators must vote against declaring a National Emergency. Unfortunately, Republicans in the Senate have not stood up to Trump the last two years. While there have been some cracks of late it hardly inspires confidence. For example, Senator Susan Collins, R-Maine, claiming she will vote against the National Emergency Act is like Lucy and the football…we’ve been fooled too many times to believe her.

If every Senate Democrat votes against declaring a National Emergency, then four Republican senators must join them to pass the measure and send it to Trump, who has promised to veto it. If Trump does veto the measure then it will take every Senate Democrat and 18 GOP senators to override Trump’s veto. Remember, 22 Republican senators are up for re-election in 2020, including Senate Majority Leader Mitch McConnell, R-Ky., and Senator Lindsey Graham, R-S.C., both of whom will face strong Democratic challengers in the general election – in a presidential year that will likely see record turnout with more women and voters of color voting and a real threat to their re-elections.

And if Republican senators aren’t persuaded by the threat to our country, or their own careers by allowing Trump to declare a National Emergency, then why are they running for re-election? How can they run for re-election for a job they won’t do? They’re not holding Trump accountable. They’re not acting like a co-equal branch of government. They’re giving up their authority to appropriate funds just as they have with military deployments by ducking the Authorization for Use of Military Force (AUMF). And they’re certainly not doing what’s best for their state or our country, which is their job. They’re only trying to avoid a primary. Not exactly a profile in courage let alone conduct worthy of a United States senator.

Finally, if Republicans allow Trump to declare a National Emergency and he abuses it, then leaves office because of the Mueller Report, indictments, impeachment, or some combination thereof, which is more likely than not by 2020, they’re left to defend their decision and the damage done to America as if they’ve been a bystander who had no ability to do anything about it when they could have prevented it.