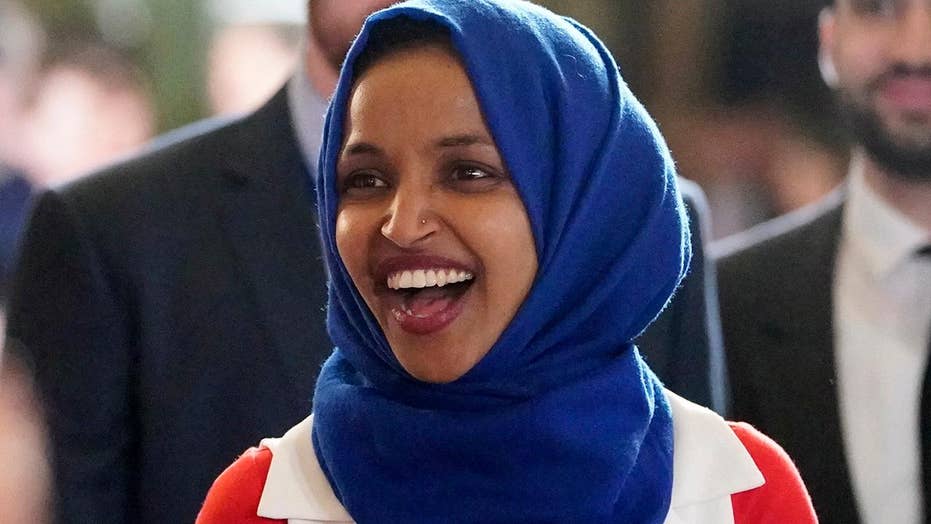 Religious, racial and ethnic hatred must find no refuge in the halls of the United States Congress. Elected officials who spread the poison of prejudice must be condemned clearly and loudly by Republicans and Democrats alike, and must be held accountable for trying to turn Americans against each other in our diverse country.

This is true regardless of which group is being targeted by the hate, or who is spreading the hate.

Bigotry directed against our fellow Americans based on how they pray, the color of their skin, or where they or their ancestors lived before coming here is equally wrong.

For this reason, a resolution being prepared by House Democrats and expected to be introduced Wednesday condemning anti-Semitism is welcome and long overdue.

But the resolution needs to be more than a simple rejection of hatred of Jews. It must name the freshman House member who has made headlines with repeated anti-Semitic attacks – Rep. Ilhan Omar, D-Minn.

Omar’s slurs on Jews are, after all, the reason the resolution is being drawn by House Speaker Nancy Pelosi, D-Calif., and other top Democrats. Failing to mention Omar in the resolution and to condemn her anti-Semitic remarks would be absurd.

Omar should get the same punishment House Republicans meted out in January to Rep. Steve King, R-Iowa, for his remarks defending white nationalism and white supremacy. Just as Republicans stripped King of all his committee assignments, Democrats should keep Omar from serving on any House committee.

Stripping a representative of his or her committee assignments is a serious punishment. And it sends an unmistakable message to the American public that there still are red lines in our national discourse.

The Simon Wiesenthal Center, where I serve as director of the Global Social Action Agenda, has spent the last four decades fighting anti-Semitism and teaching the lessons of the Holocaust, when the Nazis murdered 6 million Jews for no reason other than the fact that they were Jews.

But we are about more than fighting anti-Semitism – we operate the Museum of Tolerance in Los Angeles that challenges visitors to confront and fight bigotry and racism in all their ugly forms.

“I want to talk about the political influence in this country that says it is OK for people to push for allegiance to a foreign country,” Omar said last week – an unmistakable reference to the Jewish state of Israel.

When her comment drew criticism for being anti-Semitic, Omar responded by tweeting that “I should not be expected to have allegiance/pledge support to a foreign country in order to serve my country in Congress or serve on a committee.”

And Omar added: “I am told everyday that I am anti-American if I am not pro-Israel. I find that to be problematic and I am not alone. I just happen to be willing to speak up on it and open myself to attacks.”

A number of leading Jewish organizations have presented Pelosi with a petition calling for Omar’s removal from the House Foreign Affairs Committee, which deals with U.S. relations with countries around the world, including Israel. That’s a good first step, but not enough. Omar doesn’t belong on any House committee.

Omar has leveraged her anti-Semitism to garner national headlines, gain global name recognition and gain support from people who share her view that the only reason American politicians back a strong U.S.-Israel alliance is that they are bribed by rich Jews.

We still await Omar’s explanation of how her conspiratorial views account for the millions of Christians in the United States who are the backbone of U.S. support for Israel. It was these Christians – even more than the small population of American Jews – who successfully lobbied President Trump to live up to his promise to move the U.S. Embassy in Israel to the Jewish state’s eternal capital of Jerusalem.

Let me be clear: condemning Omar has nothing to do with the fact she is a Muslim and an immigrant from Somalia. Any prejudice against her because of her religion, race or the fact that she is from Africa is just as wrong and evil as the anti-Semitic prejudice she preaches.

At the same time, no one should be shielded from responsibility for spreading hatred of another group simply because they are a member of a group that has been persecuted.

Too many people, in too many generations, have given of themselves and sometimes given up their very lives to build a society where hyphenated Americans have equal status and opportunity, only to see it besmirched and demeaned by bigots.

It is not an easy course that we ask Speaker Pelosi to take. But we at the Wiesenthal Center revere the memory of her late father, Thomas D’Alesandro Jr. He served in the U.S. House and was also mayor of Baltimore.

A life-long Democrat, D’Alesandro showed true political courage when he broke ranks with President Franklin Delano Roosevelt’s administration to work to save the remnants of the Jews of Europe during the Holocaust and to advocate for a Jewish state.

One can only imagine how differently history would have turned out if more members of Congress – Democrats and Republicans – had joined with D’Alesandro to demand that the U.S. do the right thing to save more Jews from the mass murders carried out by the Nazis.

It will take political courage at this time in American history with our fractured social and political discourse for members of the House to give Omar the punishment she deserves by keeping her off any committee.

House members can draw inspiration from our first president, George Washington, who wrote a letter to the tiny Jewish community in Newport, Rhode Island in 1790 making clear that the ancient prejudice of anti-Semitism had no place in the new nation of the United States of America.

Washington told Jews who had fled persecution in other parts of the world that they were welcome to freely practice their religion in the U.S.

Our first president wrote: “For happily the Government of the United States gives to bigotry no sanction, to persecution no assistance, requires only that they who live under its protection should demean themselves as good citizens, in giving it on all occasions their effectual support.”

The wisdom of George Washington in 1790 is worth following today.