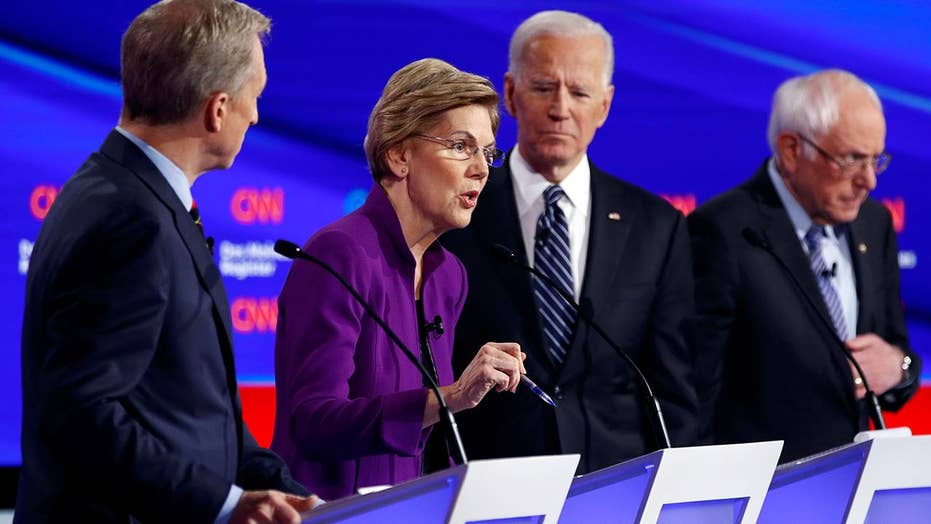 How did foreign policy factor into the seventh Democratic presidential debate?

The most important job of the president of the United States is serving as commander in chief of our armed forces and defending the American people against threats to our national security. But in their Iowa debate Tuesday night, none of the six Democratic presidential contenders on stage seemed ready for this awesome responsibility.

The candidates don’t lack brainpower but they are more focused on domestic issues. U.S. relations with Russia, China and many others nations – and space threats and defense policy – were barely mentioned during the debate.

Most of the attention on defense and foreign policy centered on Iraq and Iran, which are much in the news now after President Trump ordered the killing of Iranian terrorist mastermind Gen. Qassem Soleimani and Iran retaliated with missile strikes on military bases in Iraq where U.S. troops were housed. Fortunately, there were no casualties from the Iranian strikes.

Based on the Iowa debate, none of the Democratic would-be presidents measured up as well as President Trump to being commander in chief. None rolled out concrete strategies for moving ahead on Iran or setting defense priorities.  Here is a sampling of what they said:

Sen. Bernie Sanders, I-Vt., showed that he would be the antiwar protester in chief if he makes it to the White House. He made it clear that he would take military action off the table in almost all cases short of a direct military attack on the U.S.

Burnishing his anti-war credentials, Sanders used the debate to once against boast about his vote against the Iraq War in 2002 and attacked former Vice President Joe Biden for voting in favor of the war when Biden was a senator.

Sanders also supported a failed resolution to prohibit the U.S. from aiding Yemen’s recognized government in its fight against Iran-backed rebels.

The Vermont socialist senator argued in favor of global negotiation instead of military action to settle disputes, but fails to accept the fact that if our adversaries don’t fear a U.S. military response as a last resort they will have far less incentive to make concessions in negotiations.

In addition, Sanders won’t support the U.S.-Mexico-Canada trade agreement (USMCA) – which would strengthen our economy and make us better able to face national security threats – unless the agreement includes climate change.

The late Chinese leader Mao Zedong famously called the U.S. “a paper tiger.” Under a Sanders administration, that description would be accurate.

Former Vice President Biden cast himself as the most experienced and capable candidate on national security issues, based on his long service in the Senate and his tenure as President Barack Obama’s No. 2.

But Biden’s record is far from unblemished. President Obama asked him to end the war in Iraq – but that didn’t go so well. Three years later, in 2014, ISIS was 20 miles outside Baghdad.

The defeat of the ISIS caliphate took place under the leadership of President Trump, after America dropped over 118,000 bombs on Syria and Iraq.

Biden also was a big proponent of the 2015 Iran nuclear deal, assuring Congress that the deal kept U.S. military options open. But the deal lifted economic sanctions on Iran and released billions of dollars in cash to that nation’s anti-American regime, which has used the money to finance international terrorism.

At the same time, North Korea conducted 78 missile and nuclear weapons tests from 2009 to 2016 while the Obama-Biden administration was in office. The nuclear and missile threat from the North grew worse.

Sen. Amy Klobuchar, D-Minn., used the debate to tout here her 12 years of Senate experience with strong points on Afghanistan, military health and pay issues. Back in the summer, she called out the Iran threat and China’s unfair trade practices.

Klobuchar threw long, claiming Trump is “taking us pell-mell toward another war” with Iran. But later she said she would talk with Iran. Oops. So would Trump and half of Europe. The key is getting Iran to talk. Klobuchar missed the chance to rebrand her experience as leadership.

Sen. Elizabeth Warren, D-Mass., pledged to keep America safe and praised the military. This, of course, is something all candidates say. Can you imagine a candidate promising to make America less safe?

Then without missing a beat Warren said she distrusts all the generals briefing her on Afghanistan. Notice any inconsistency with praising the military?

All too soon Warren hunkered down in her foreign policy comfort zone: criticizing the defense industry, the Pentagon and defense spending. Warren sits on the Senate Armed Services Committee, has a giant defense company in her home state of Massachusetts, and could offer real insights. Instead she sticks to slogans that downgrade her commander in chief potential.

Former South Bend, Ind., Mayor Pete Buttigieg once again highlighted his service as an intelligence officer in the Navy Reserve, including his deployment to Afghanistan for seven months, as qualifying him to become commander in chief.

All his rivals have saluted Buttigieg for volunteering for military service, but the responsibilities of the commander in chief are quite a bit greater than those of a Navy lieutenant.

Voters must gauge how much to credit Buttigieg’s Navy service as preparation for the White House. For Presidents John F. Kennedy, Lyndon Johnson, Richard Nixon, Jimmy Carter and George H.W. Bush, their Navy service was no predictor of their successes and failures as commander in chief.

Buttigieg reminded voters that young enlisted military members don’t remember the Iraq war votes that were so hotly discussed in the debate.

At age 38, with a 30-year old spouse, Buttigieg is all about new topics like cyber threats and climate change, arguing that these pose major national security threats in the years ahead.

Tom Steyer, a billionaire hedge fund founder and philanthropist, argued that his experience investing all over the world while running his firm with offices from Brazil to Hong Kong has somehow made him an expert on America’s defense and foreign policy.

Steyer wants to cut the defense budget “dramatically,” which comes off as either cynical, short-sighted or both, given direct military technology threats from Russia and China. Voters likely won’t “buy” this money whiz as commander in chief.

The bottom line is that pollsters push presidential candidates away from foreign policy and defense topics. That’s why until the recent turmoil involving Iran and Iraq, these issues were not a major focus of the battle for the Democratic presidential nomination.

The American people elected relative neophytes in the national security sphere with Obama in 2008 and Trump in 2016 over opponents with longer foreign policy records. However, strong foreign policy positions helped both Obama and Trump win primaries en route to the presidential nomination.

In 2020, with Iran on the boil and Russia and China teaming up, foreign policy competence seems likely to be a much more important issue that it has been in recent elections. It will certainly be a hot topic in the fight for the Democratic presidential nomination – and in the election campaign against the current commander-in-chief, President Trump.