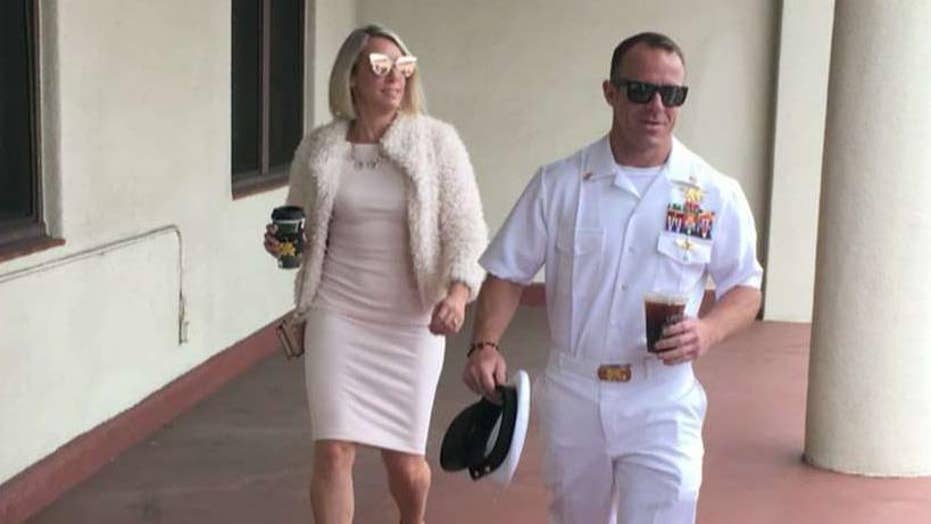 The attorney for Navy SEAL Eddie Gallagher tells 'America's Newsroom' that he hopes the inspector general can investigate the case and take corrective actions to improve the Navy.

The resistance movements in Europe in World War II were made up of brave men and women who risked their lives to fight tyrannical Nazi occupation forces. Absurdly, political opponents of President Trump today call themselves “the resistance,” and pretend they are heroically fighting evil in the form of the president of the United States.

We’ve seen those on the left hold protest demonstrations against Trump since he was elected in a dramatic upset in 2016. And with much of the media glorifying those opposed to the president, it has become chic to be part of the anti-Trump resistance.

But that’s not OK within the executive branch of government – especially at the Pentagon, which is in charge of defending our nation.

Like it or not, Trump is our duly elected president and the commander in chief of our military. Government workers and members of the military have an obligation to do their best to help the president govern, or to resign if they oppose his policies.

The latest person to fall under the spell of the anti-Trump resistance was Navy Secretary Richard Spencer. His boss, Defense Secretary Mark Esper, fired Spencer on Sunday for going outside the chain of command when Spencer disapproved of President Trump’s decision to restore the rank of Navy Chief Petty Officer Eddie Gallagher and allow him to retire as a SEAL.

Gallagher had been demoted and the Navy was in the process of reviewing his status as a SEAL after he was acquitted of a murder charge but convicted on a lesser charge of posing with the body of an ISIS fighter in Iraq.

Esper said Trump gave him a direct order to let Gallagher retire as a SEAL. The defense secretary said Spencer sought to have the Navy disciplinary process go forward against Gallagher anyway, but secretly offered a plan to the White House to rig the process to ensure Gallagher would not lose his status as a SEAL.

“I lost trust and confidence when I found that this secret proposal was happening,” Esper said Monday night.

Not even one bit sorry, Spencer spoke to David Martin of CBS News and said he “had to step up and do something” for the resiliency of the Navy. He complained that President Trump doesn’t understand what it means to be “a warfighter.”

Faced with a direct order, Spencer said: “I could not in my conscience do this.” CBS even got the Spencer family car on-camera pulling up to give the fired official a ride home.

Then, two Navy secretaries from the administrations of Presidents Bill Clinton and George H.W. Bush spoke out to bash Trump for interfering with the Navy and label his action in favor of Gallagher “contamination.”  “His values are not the military’s values,” they wrote in The New York Times.

That’s a lot of resistance. All the more shocking is that Spencer took on Trump and Esper both.

The Spencer case is sad proof there is indeed a “deep state” anti-Trump resistance phenomenon popping up within the Pentagon. Spencer felt free to act and speak out as he did because he’s surrounded by like-minded Trump skeptics, and over time it clouds judgment.

The backlash over President Trump’s Syria, Turkey and even North Korea policies provided warning signs, but when senior appointed officials develop a disdain for carrying out clear orders from the commander chief, that’s bad for the military and bad for America.

Fortunately, Esper gets it. Esper fought off a major challenge to legitimate authority, and he’ll have to keep protecting the chain of command against “resistance” groupthink.

The secretary of defense has to get the leadership team at the Pentagon back on track, and he realizes it.

“I want the SEALs and the Navy to move beyond this now and get fully focused on their warfighting mission,” Esper said Monday.

Spencer had no basis for going against Trump’s order regarding Gallagher. The Constitution gives the president the power to grant reprieves and pardons for offenses against the nation.

Executive clemency dates back to President George Washington. Where military matters are involved, you never know who presidents may pardon or give a reduced sentence.

Washington forgave the ringleaders of the Whiskey Rebellion, who tried break Pennsylvania out of the infant Unite States. Other presidents let off pirates, killers, Confederate secessionists at the end of the Civil War, and other rebels.

Some clemencies were astonishing.

Army Master Sgt. Maurice Schick admitted he killed the 8-year old daughter of a colonel on a military base in Japan in 1954. Schick was a combat veteran of WWII campaigns in North Africa, the Mediterranean, and Europe, including the Battle of the Bulge. In 1960 President Dwight Eisenhower reduced Shick’s sentence from death to life without parole.

In 1971, President Richard Nixon (trial lawyer and World War II veteran) moved Army Lt. William Calley from prison to house arrest after only three days behind bars while Calley appealed his conviction and life prison sentence in the 1968 My Lai massacre in South Vietnam, in which several hundred South Vietnamese civilians were killed. Calley was later paroled after serving three years under house arrest.

The list goes on. Some are easy to grasp, others aren’t. But unless the Constitution is amended, the president has the power to pardon.

Executive clemency allows the president to show compassion or forgiveness. That’s a heavy responsibility, and history shows presidents use it repeatedly.

This power is one we ordinary citizens may never fully understand. And while we won’t all agree on the clemency decisions by our presidents, we should always respect them, as our Constitution intended.