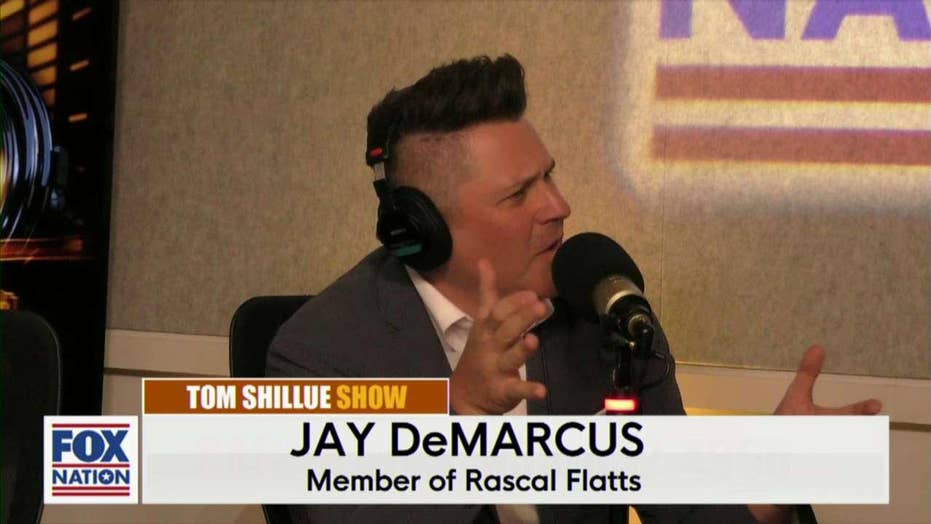 Rascal Flatts' Jay DeMarcus believes America is feting away from the Christian values our country was funded on. The musicians think that faith can help those who are struggling with depression and other personal problems

Go ahead, fill in your dream. Probably feels insane or uncomfortable to write what your heart is really feeling. An impossibility.

Why would I write something in the blank? It’s no good. It’s not going to happen.

It felt insane for a skinny, scrawny, awkward, “run the wrong way in a basketball game” kid from Columbus, Ohio, too. If someone would have told me 20 years ago that I’d be where I am today, I would have laughed in their face. Maybe you would too.

And I get it. It’s not easy to fill in a blank space with a dream you’ve already convinced yourself will never come true. For crying out loud, I flunked my driving test when I was 16 (three times I failed it!), and I never ever won the 100-meter dash at field day, and I never got to play wide receiver for the Cincinnati Bengals – I’m with you on shattered dreams and impossibilities.

“I guess it couldn’t hurt,” you say, as you start filling in the blank. “It’s not going to happen,” you say. And I’d say the same.

But dreams do start in blank spaces. They begin in the dark, standing in the snow, waiting for your roommate to not screw up your one chance. They begin when your guitar player gets sick and you’re left staring impossibility in the face. They begin like a song with no words – out there, waiting to be carved into music by a willing hand.

The Grammy? The Super Bowl? The CEO job? Those are final movements. They’re codas stamping a life with a cool bit of finality and purpose, right? That’s what a coda is in music – a concluding section. And all these great goals and achievements? They’re fantastic conclusions of the lucky, the special ones.

Or so they say.

What if I told you hope doesn’t care what you do, how famous you are, how far you’ve fallen, or how much money you have? What if I told you hope was built along the broken road by hard work, sacrifice, disillusionment, and toil, and that those broken pieces along the way contribute to the stanzas of a heart that hopes? The cadence of an unbreakable spirit. The grit in the face of a world that says it’s okay to give up, to let hope go.

Would you believe it?

My story is improbable, bordering on the impossible, if you look at it from a simple human, practical point of view. In many ways, I’m a textbook example of the American Dream. I come from humble beginnings, raised mostly by a single mother who worked two jobs and struggled to make ends meet.

My story is improbable, bordering on the impossible, if you look at it from a simple human, practical point of view. In many ways, I’m a textbook example of the American Dream. I come from humble beginnings, raised mostly by a single mother who worked two jobs and struggled to make ends meet. We lived in a small house in a not-so-great neighborhood. We wore hand-me-down clothes, and forget about my mom ever having a new car – she drove very used cars, like the 1978 Ford Thunderbird with more than 200,000 miles, with plywood covering the floorboards where they had rusted through.

I’m not complaining because we never felt it; we never felt like we didn’t have much. We always had enough to eat. Those two jobs sent us to private Christian schools. Christmases always seemed magical. And my sister, Tiffany, and I always felt loved. But the biggest thing from my childhood that stands out to me is that we were always in church, and I mean always. Ugh.

(Photo by Rick Diamond/Getty Images for Innovation In Music Awards)

Any time the doors were open, we were there.

Through a kid’s eyes like mine, sometimes it seemed a bit excessive, I will admit. And growing up in a Pentecostal church, watching people shout, run down the aisles, and jump in the pews, it also scared the crap out of me on more than one occasion. But even though I was a kid, it was not lost on me that there was a reason my mother was able to have so much on her plate and not completely lose her mind.

You see, she lived from paycheck to paycheck. The extra holiday shifts she picked up at Kmart were to ensure that our Christmases were magical. I knew it. I watched it, and I marveled at it. I also knew how she did it.

My mom had hope.

People often ask me when the moment was that I gave my life to Christ and became a believer. This may sound strange, but for me, it was never a choice. I had to believe in God because he has proven himself to be real too many times in my life.

So I have to start with hope.

Everything for me begins with hope.

I can count a multitude of blessings, but I have to say that even my obstacles, even the dark times, are blessings. Strange thing to say, I know. But those were the times when I had to dig the deepest, when I’ve had to tap into that hope, even if it was elusive.

If God can use someone like me, if he’ll do these things for a kid from Columbus, Ohio, who sometimes had no clue where to even start, he will do them for you.