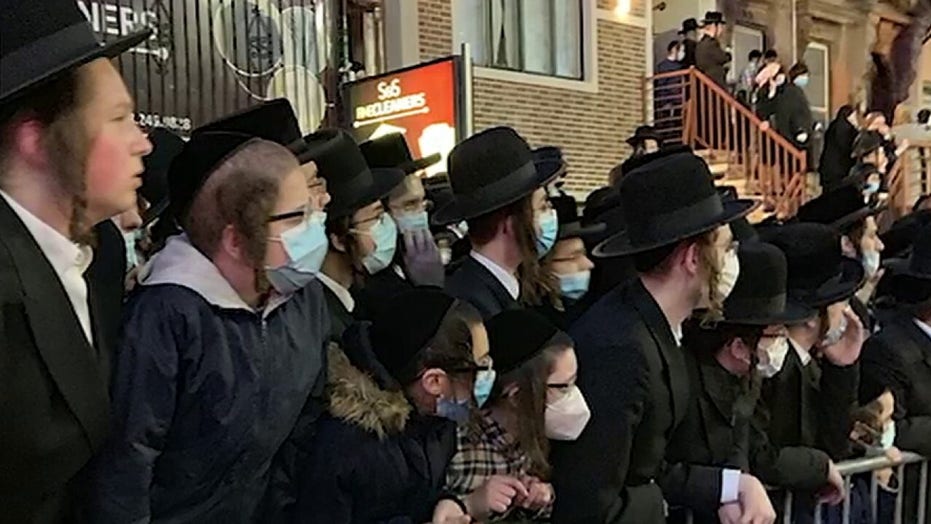 Concern over the spread of the coronavirus is no excuse for New York City Mayor Bill de Blasio’s outrageous outburst that scapegoated all Jewish New Yorkers after large numbers gathered in Brooklyn for the funeral of an Orthodox rabbi.

Police broke up the funeral Tuesday night of Rabbi Chaim Mertz in order to enforce social distancing guidelines and limits on crowd size that were imposed to fight the spread of the pandemic.

With approximately 1.1 million Jewish residents, New York City has the largest Jewish population of any city in the world. Even before the coronavirus pandemic hit the city harder than any other U.S. community, the New York City metropolitan area was already reeling from an unprecedented wave of violent hate crimes targeting primarily religious Jews.

De Blasio’s inflammatory language blaming Jews as a group for the conduct of a few is like throwing gasoline on the fire of the anti-Semitism that burns in the hearts of haters and risks inciting some into violent action.

The mayor tried to backpedal somewhat during a news conference Wednesday, saying his tweet was motivated by “frustration” and “anger” about the spread of the coronavirus.

“I regret if the way I said it in any way gave people a feeling of being treated the wrong way, that was not my intention,” de Blasio said. “It was said with love, but it was tough love.”

To be clear, since the coronavirus pandemic hit the U.S., my organization – the Simon Wiesenthal Center – and others have been working hard on a grassroots level with local Jewish leaders in New York and New Jersey to ensure full compliance with social distancing and the closure of houses of worship, schools and other community facilities.

There is absolutely no excuse when people fail to follow these rules.

But de Blasio’s angry tweet called into question whether he even checked with the New York City Police Department about the funeral of Rabbi Mertz in Brooklyn.

In fact, Rabbi Mertz’s congregation had worked with the local police precinct to develop a plan to close streets so that the funeral of their spiritual leader could take place following social distancing rules, with mourners wearing masks.

Members of the congregation and police were surprised by the large number of people who showed up. Many in the crowd were teens who would not listen to directions from the Shomrim (volunteer civilian patrol) or the NYPD.

Such behavior cannot be tolerated in these perilous times. It deserves the universal condemnation that it generated. But it did not merit the emotional and harmful outburst from the mayor.

Spouting this type of rhetoric could further fuel the full-blown efforts by extremists to blame the coronavirus pandemic on Jews and other minorities.

How can I be so sure?

First, because Jews have been falsely blamed for epidemics, economic crises and other unfortunate events for thousands of years. Jews have been the scapegoats of choice.

Second, because the Simon Wiesenthal Center scours the Internet for hate activity around the clock. Our researchers have found a steady stream of social media postings calling for violence against Jews and others because of the coronavirus pandemic. We take these threats so seriously we share them with the U.S. Justice Department and the Department of Homeland Security, along with police departments across the nation.

And third because de Blasio is far from the first politician to fan the dangerous flames of anti-Semitism – even if inadvertently. Inflammatory words have consequences.

In New Jersey, a local city councilman recently sent out an offensive and potentially anti-Semitic comment on social media. But Sam Joshi, an Indo-American, publicly recognized his mistake, showed real leadership and is now in the vanguard in the fight against anti-Semitism.

Joshi is also fighting the equally repugnant scapegoating of Asian-Americans who are being absurdly and unfairly blamed for spread of the coronavirus that began in China.

New York is blessed with many talented grassroots politicians working to improve intergroup relations. De Blasio would do well to follow their example. One of the leading examples of a politician seeking to bring all New Yorkers closer together is state Assemblyman Walter Mosley, an African-American representing Brooklyn.

In just a few weeks, the coronavirus pandemic has turned life as we knew it upside now. People everywhere are on edge. Millions are out of work, worried about paying their bills, and worried about being killed by the virus.

My family has seen two cousins in New York die and other loved ones hospitalized by the coronavirus. Tragically, tens of thousands of other American families are struggling with death, sickness and dislocation.

We don’t need lectures about the need to change our behavior to fight this deadly pandemic. We need leaders to lead, to empathize, to provide accurate information and to be measured in the words and deeds.

We hope Mayor de Blasio and all our other leaders do these things. We are, after all, in this fight against an invisible viral killer together.