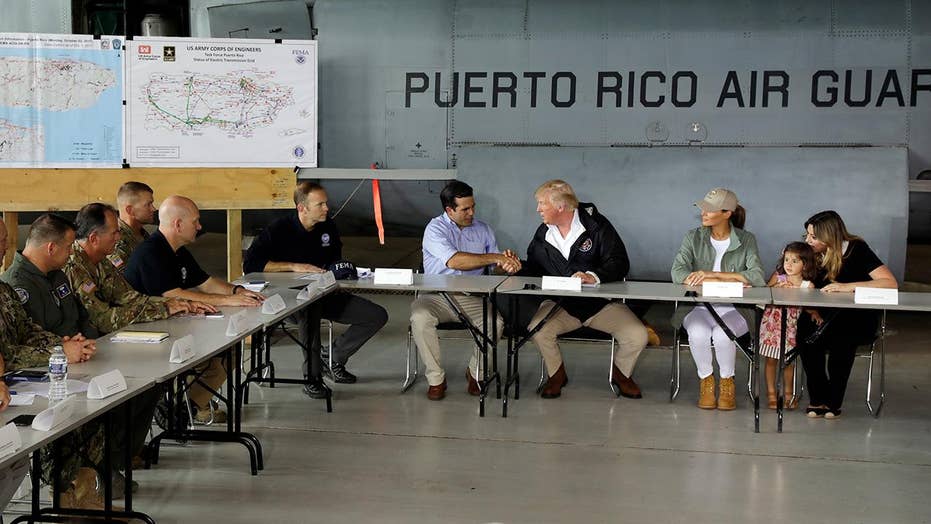 Bernie Sanders and Hillary Clinton are very, very concerned about the people of Puerto Rico. Both have joined the mayor of San Juan in criticizing President Trump for not doing enough for the Commonwealth in the aftermath of Hurricane Maria.

Seriously, where have they been?

Where were they when Puerto Rico’s debts ballooned to $123 billion, thrusting the economy into an 11-year recession?

Where were they when 50,000 of the island’s best and brightest hightailed to the mainland every year, looking for jobs and opportunities, as median household income sank to $18,626 as compared to $56,516 on the mainland?

Where were they as the territory’s power system went bust, while its administrators came under FBI investigation for stealing from the people of Puerto Rico?

They were nowhere to be seen, except of course during election season. As more Puerto Ricans left the island looking for work, they swelled the Hispanic population in Florida, a group that Hillary Clinton’s campaign determined was key to her success in the state. In Orlando alone there were 80,000 registered Puerto Ricans. Signing up new Puerto Rican voters, who as residents of the U.S. are allowed to cast a ballot, became a critical tactic in Clinton’s Florida strategy. Polling determined that 74 percent of the newcomers were likely to support Hillary, as compared to 17 percent that fell in Trump’s column.

Hillary appealed to Puerto Ricans in New York, Florida and elsewhere by appearing to support their enthusiasm for statehood. She didn’t bother to campaign in the territory, even though winning Puerto Rico’s Democratic primary helped her quest for the nomination last year. She sent Bill, instead.

That’s ironic because it was President Bill Clinton who signed the repeal of Section 936, the 1976 tax provision that exempted corporations operating in U.S. territories like Puerto Rico from federal taxes and caused a surge in economic activity on the island. That loophole caused numerous U.S. companies to set up shop in Puerto Rico, extending an industrialization program initiated in the 1950s called Operation Bootstrap. Over the period 1950 to 1980 per capita GNP rose ten-fold while disposable income soared 1,600 per cent. In the twenty years following the repeal of the tax advantage, manufacturing jobs were cut in half. Ten years after Clinton signed the phase-out into law, employment peaked in Puerto Rico, and the government started borrowing to make ends meet.

Meanwhile, Bernie Sanders, also campaigning for Puerto Rican votes, was one of the few that voted last year against the Puerto Rico Oversight, Management, and Economic Stability Act, called Promesa, describing it as a return to “the worst form of colonialism.” The Promesa established a board, similar to those enacted to oversee the rescue of New York in the 1970s and Detroit in 2014, to resolve the island’s financial situation and to rebuild its economy. Bernie was bound to hate the measure, especially since one of its key missions was to reduce the island’s minimum wage. Given that cheap labor abounds in neighboring islands, and the Commonwealth’s persistently high unemployment, the federal minimum of $7.25 is injurious. Soon after losing the Puerto Rico primary, Sanders dropped the issue.

To be fair, Clinton and Sanders are not alone in having ignored Puerto Rico’s problems. Legislators on both sides of the aisle have stood idly by, hoping the territory’s unpayable debts would miraculously disappear. Now that the island’s dysfunction has morphed from dangerous to fatal, and Puerto Rico is blaming Hurricane Maria and Donald Trump for its misfortunes, Americans are taking a hard look at just how badly the Commonwealth has been mismanaged. They’re discovering that the damage wrought by recent storms, and the inadequate emergency response, was inevitable.

The federal oversight board claimed in its filings that the local government is “unable to provide its citizens effective services.”   A year ago, the New York Times wrote that the territory’s towering debt burden had “crowded out other governmental spending in Puerto Rico, leaving a wake of devastation: closed schools, fewer hospital beds, homeless people squatting in abandoned houses.”  These conditions were devastating; Hurricane Maria made them life-threatening.

As disastrous as Puerto Rico’s overall finances have become, the management of the territory’s now-bankrupt power system – the source of much of today’s distress – has been even worse.  The utility, called Prepa, has for decades sent free power to “78 municipalities, many government endeavors, and even to for-profit businesses,” as the Times reports, leading to high bills for private citizens and declining service.   The system long relied on imported oil; the management has been accused of improper use of substandard fuel and of profiteering.

Weeks ago, before any major storms had hit the island, Prepa’s management warned that outages might last up to six months, given the antiquated state of its infrastructure. In September the Times quoted a 2016 report saying that Prepa “appears to be running on fumes, and…desperately requires an infusion of capital—monetary, human, and intellectual—to restore a functional utility.” No wonder most of the island is still without power.

If any good is to come out of the devastation of Hurricane Maria, perhaps it will be that Americans learn that political corruption fed by high taxes and a bloated bureaucracy is a toxic combination. This is not Venezuela. This is a U.S. territory, and a struggling neighbor, which needs our help and a serious economic reboot.