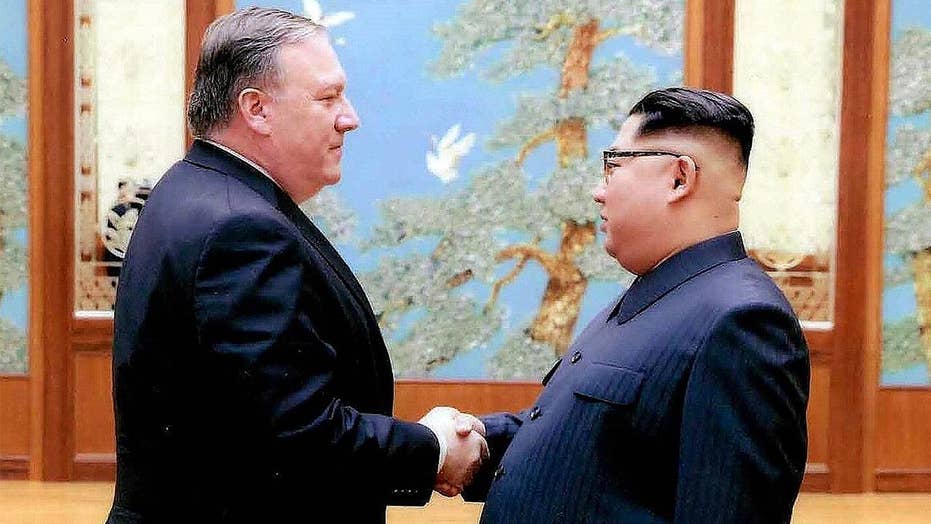 What to expect from Pompeo's North Korea trip

Another “Mission: Impossible” movie starring Tom Cruise will be hitting theaters later this month. But what looks like a real-life Mission: Impossible takes place Friday and Saturday, when Secretary of State Mike Pompeo meets with top North Korean officials to try and get them to agree to a plan to get rid of all their nuclear weapons.

Cruise has a much easier mission than Pompeo.

Pompeo’s seemingly impossible task in his talks in North Korea will be to turn the vague commitment North Korea has made “to work toward denuclearization of the Korean Peninsula” into reality, with verifiable timetables. North Korean dictator Kim Jong Un made the commitment at his June 12 summit in Singapore with President Trump.

President Trump agreed to the summit in an effort to show Kim what his impoverished nation’s future could look like if Kim gives up his nukes. President Trump even showed Kim a specially produced video painting a rosy picture of a prosperous denuclearized North. But since the much-publicized summit, there has been no progress at all towards any sort of atomic disarmament.

In fact, according to multiple reports, it seems the North Koreans are adding to their nuclear and missile capabilities – a truly disturbing turn of events that seems to underscore what many have always feared: Kim Jong Un is striving for nuclear acceptance, not nuclear disarmament.

The North Korean dictator – like his father and grandfather who ruled before him – has a long history of lying and breaking promises about his intentions. Past U.S. presidents who accepted commitments made by the Kim dynasty have all seen those commitments broken.

This should not surprise us. This strategy of lying and delaying again and again has worked for Kim and his predecessors in the past, so why should we think he will stop using it now?

The time has now come for the Trump administration to truly test whether the Kim regime is serious about getting rid of its nuclear weapons and missiles, or whether Kim is lying yet again.

There is a simple way to answer this crucial question. Pompeo should ask for – in fact, he should demand – a simple accounting of North Korea’s nuclear program and its total amount of warheads and missiles. Such information is of critical importance going forward.

If Washington and Pyongyang are going to agree to any sort of timetable to achieve the longstanding U.S. goal of “complete, verifiable and irreversible denuclearization” of North Korea, America and its allies must know the size of the task they are faced with.

For example, U.S. officials will need to know:

?         Most importantly, how many nuclear warheads Kim has in his arsenal, how powerful those weapons are, and where they are all located.

?         How many nuclear reactors the North has and the location of each reactor – especially if they are underground.

?         The number of centrifuges used to create material for nuclear bombs, their level of sophistication and where they are located.

?         A detailed accounting of the North’s personnel who are working on the nuclear program, including the number of scientists.

If North Korea wants to keep its nuclear weapons – something the U.S. must never accept – then it must live in total poverty and isolation. The price of its defiance should be staggering.

?         How much nuclear material the North has produced and a full list of every site where any atomic waste is located.

?         A full list of Kim’s international nuclear dealings – such as North Korea’s building of a nuclear reactor for Syria.

Getting all this basic information will allow Washington – along with the International Atomic Energy Agency and other international agencies and experts – to ascertain how long it would take to fully remove any nuclear weapons-making capacity from North Korea.

If Pompeo asks for all this information, the response from North Korea will determine if Kim is serious about ever give up his nuclear weapons – or if he was simply trying to pull the wool over President Trump’s eyes with his smiling assurances in Singapore.

If Kim refuses to even give a simple accounting of his atomic program, we will know for certain that he tricked President Trump into a summit, and tricked Trump into calling off military exercises between the U.S. and South Korean armed forces.

But if Kim follows his nation’s normal diplomatic playbook, what he will do when asked for a full summary of his nuclear program is clear.

First, the North won’t say “no” when asked for information by Pompeo, but it will want to haggle over what should be included in more limited summary.

The North Koreans will likely try to declare certain parts of their nuclear program for civilian use. They will say certain scientists should be excluded from reporting because they engaged in peaceful research. They will falsely state that missiles they are building are not designed to carry nuclear warheads at all, but instead are for launching communications satellites and for space exploration.

Next, the North will stretch out these negotiation – just for a listing of its nuclear facilities and capabilities, not disarmament – as long as possible. This could go on for months, maybe even years if America puts up with the delaying tactics.

And all the while, Kim will be building more sophisticated and capable nuclear weapons and missiles.

This should not surprise us. This strategy of lying and delaying again and again has worked for Kim and his predecessors in the past, so why should we think he will stop using it now?

This is where the Trump administration needs to break this pattern of behavior and show North Korea that its old tricks won’t work.

Pompeo needs to explain to Kim that while America has been patient – showing good will towards North Korea to prove that we are no threat to the regime – our patience is not limitless.

Pompeo should set a firm deadline – I recommend Aug. 1 – for North Korea to produce a full, unabridged accounting of its entire nuclear and missile programs.

And here is the kicker: Pompeo should say there will be no negotiation on this point. Either Kim Jong Un is willing to declare to the world the scope of his nuclear program, or he is not.

And then Pompeo should let the North Koreans know that if they refuse to make this complete disclosure, they should be prepared to face serious consequences – with America keeping all options on the table, including military options.

On the economic front, the Trump administration should be prepared to impose the harshest sanctions possible on North Korea if it refuses to give a full accounting of its nuclear program in the next few weeks.

These sanction should prevent North Korea from exporting anything of value. The sanctions should halt the flow of oil imports into the North. And North Korean workers in other countries, who send a big share of their earnings to the Kim regime, should be sent home within 30 days.

If North Korea wants to keep its nuclear weapons – something the U.S. must never accept – then it must live in total poverty and isolation. The price of its defiance should be staggering.

Of course, any new U.S. action against the North could prompt Kim to resume missile and nuclear tests, ratcheting up tensions and putting the world back on the brink of a nuclear crisis.

But what is the alternative of America standing firm? Realistically, it would be months or even years of pointless negotiations, more lies and broken promises from the North, and an even stronger nuclear North Korea in a year or two that would pose a far greater threat to South Korea, Japan, the United States and the world.

I hope I am wrong and being overly pessimistic – but history tells us otherwise.